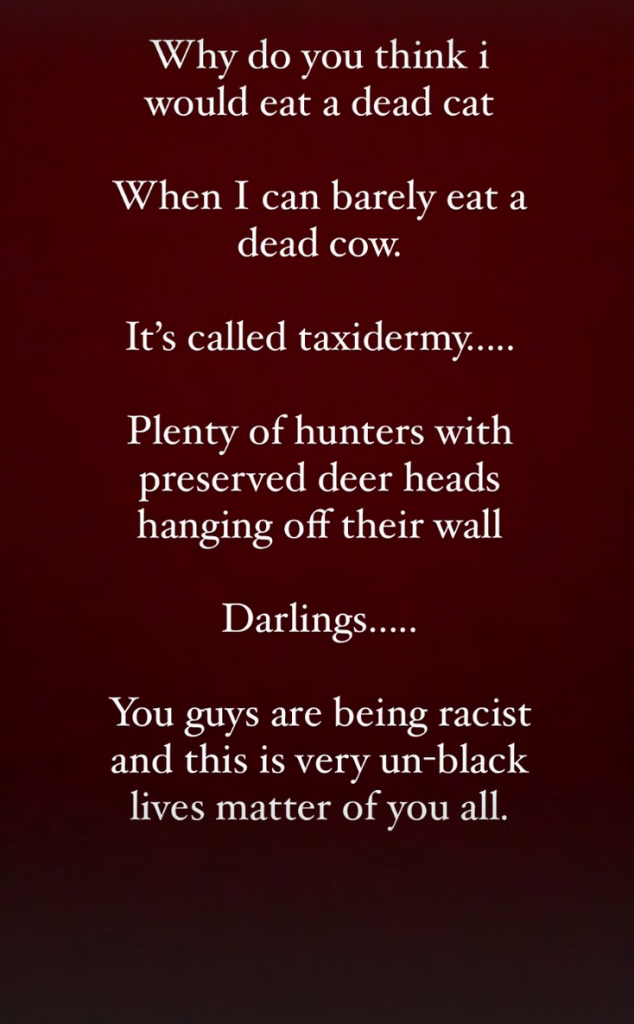 Azealia Banks has rubbished claims she dug up her dead cat to eat him and insists she’s using the remains for taxidermy instead.

Fans of the 212 rapper were shocked after she shared videos of herself and friends digging up her pet cat Lucifer and appearing to cook his body in a pot three months after he died.

Although Azealia – who is vegan – was never filmed eating the remains, fans speculated that she had, fuelling immense backlash.

However, she’s now set the record straight and wrote in her Instagram stories: ‘Why do you think I would eat a dead cat when I can barely eat a dead cow.

She continued: ‘Darlings… You guys are being racist and this is very un-black lives matter of you all.’

‘The cats head is soaking in peroxide to fully clean him, then I’m taking him to a jewellery shop to have it gilded. Lucifer was an icon. He deserves to be preserved.’

‘You may, indeed, kiss my witchy ass,’ she concluded.

In the videos, which were removed from Instagram, a person’s hands could be seen clawing the soil where Lucifer was buried and pulling out a bag.

The cat’s remains then appeared to be added to a pot of liquid that Azealia was stirring.

‘A lot of you guys don’t know, Lucifer the cat died three months ago, and we had to put him in the ground, and we’re digging him up for the very first time,’ the rapper told her followers.

Among the disturbing clips was another post showing Lucifer’s skelton with the caption: ‘She’s ready.’

The 212 rapper shocked fans with the footage (Picture: Getty Images)

Reacting to the videos, one Twitter user said: ‘Azealia Banks dug up her dead cat and cooked it…  i have no words for 2021 this is not the year.’

‘Azealia Banks cooking her dead cat is the moment I’m out. Humanity is done. It’s time to give other species a go. Otters maybe. All hail our otter overlords,’ another said.

Another fan said they always had faith that Azealia wouldn’t eat her cat and commented: ‘Azealia is literally a vegan why would y’all think she would eat a cat and her own cat.’

The 29-year-old came under fire in 2016 when she shared a video of herself cleaning feathers and blood out of a cupboard after apparently sacrificing chickens in it for three years.

Got a …read more