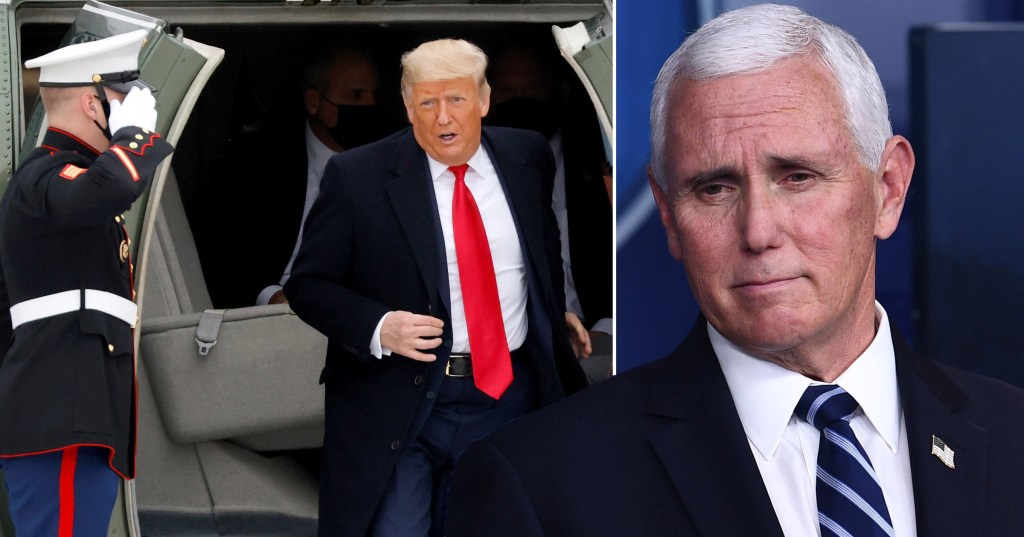 Mr Pence said the legislation should be reserved for cases of medical or mental incapacitation (Picture: Reuters/Getty)

US Vice-President Mike Pence has refused to use the 25th Amendment to remove President Donald Trump from office following the violent Capitol riots.

The House of Representatives voted on Tuesday in favour of the move, which would deem the US leader unfit for office and replace him with the vice-president.

Members urged Mr Pence to ‘declare what is obvious to a horrified Nation: That the president is unable to successfully discharge the duties and powers of his office’.

However, the politician argued the legislation should be reserved for cases of medical or mental incapacitation and not be used ‘as a means of punishment or usurpation’.

In a letter to House Speaker Nancy Pelosi, he said it would ‘set a terrible precedent’.

The Democratic bid to invoke the 25th Amendment is now void so the House will move to impeach Trump.

Mr Pence has encouraged Congress to avoid actions to ‘further divide and inflame the passions of the moment’ and to focus on smoothing the transition to President-elect Joe Biden’s administration.

But Ms Pelosi says Trump must be charged after the ‘seditious attack’ on the Capitol that resulted in five deaths.

She said: ‘I urge my Republican colleagues to open their eyes and to finally hold this president accountable.

‘The story of our country, and the future of our very democracy, are at stake.’

The president faces a charge of ‘incitement of insurrection’, with Democrats set to vote on an impeachment resolution on Wednesday.

It remains unclear if Democrats will gather the two-thirds vote needed to convict him.

However, four Republican lawmakers have announced they plan to support the vote, including Third-ranking House GOP leader Liz Cheney.

Threats against Joe Biden and Kamala Harris being investigated by FBI

MS Cheney said there had ‘never been a greater betrayal by a president of the United States of his office and his oath to the Constitution’ in a statement.

She added: ‘The President of the United States summoned this mob, assembled the mob, and lit the flame of this attack.’

Earlier on Tuesday, Trump claimed the 25th Amendment posed ‘zero risk’ to him but will ‘haunt Joe Biden and the Biden administration’.

He warned: ‘As the expression goes, be careful what you wish for.’

Person shot by police in Lawndale