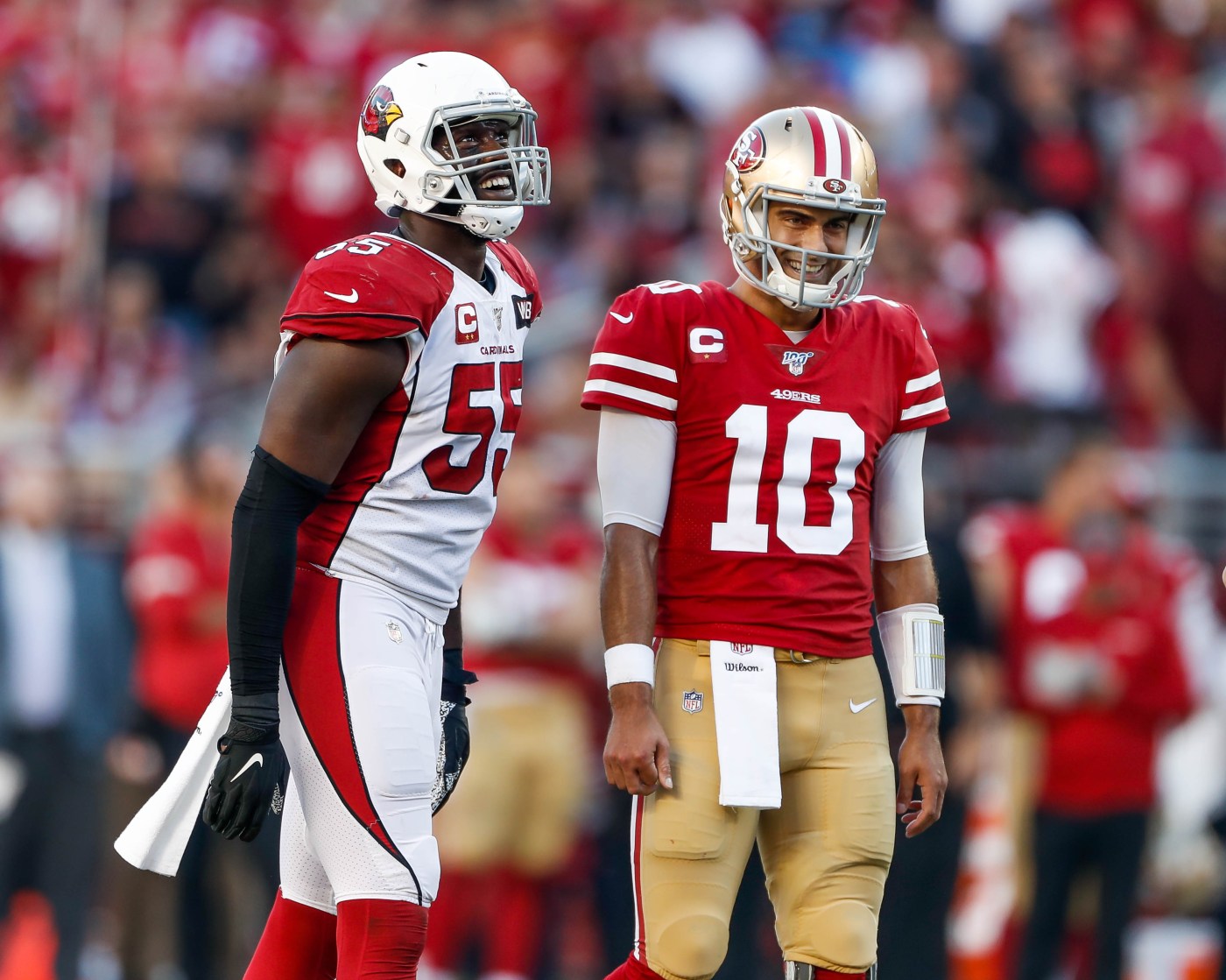 Not so great in the Super Bowl.

“Both times we played Jimmy, he was awesome and played as good as anybody we faced,” Kingsbury said this morning on a call with Bay Area media. “I’m a big fan of his and he’s a special talent.”

So is Garoppolo’s counterpart, Kyler Murray, who Kingsbury is expecting to “take a big jump” in his second year as the Cardinals QB.

After an offseason in which Garoppolo got panned for fourth-quarter woes in the Super Bowl, it’s worth reminding everyone what he did when the 49ers needed a passing attack in the regular season.

He passed for four touchdowns in four games, including in each of the 49ers’ down-to-the-wire wins last season against Arizona. He totaled 741 yards and completed 62 of 82 passes with two interceptions in those wins (28-25, 36-26).

In the 49ers’ Halloween visit to Arizona, Kingsbury called a timeout to nullify a fourth-and-1 stop, and Garoppolo responded with a touchdown pass for a 21-7 halftime lead, of a 28-25 win that wasn’t secured until Garoppolo completed a third-down conversion to Ross Dwelley to eat the final seconds.

“We’re playing the best team in the NFC,” Kingsbury added. “They were 10 minutes away from winning the Super Bowl, so we know we’re in for a challenge.”

On if linebacker Isaiah Simmons got drafted No. 8 overall to neutralize 49ers tight end George Kittle:

This year’s NBA draft moved back again, rescheduled for Nov. 18

“I don’t know if there is  a ‘George Kittle stopper’ from what I’ve seen,” Kingsbury said. “He’s dominated the last couple years, whether people are doubling him or putting their best corner on him.

“We felt Isaiah was the best value for our team at that time. Overall what we needed, whether in our conference or not, we needed to get better at covering tight ends and he covers space.

“… When you watch (Kittle), the thing I love is his intensity. He and (Travis) Kelce and Gronk, play with such intensity. He’s a tremendous talent. He will go down as one of the best ever if he stays healthy.”

On traveling amid COVID-19 protocol:

“Everything will be a little more tucked in. There’s no going out to dinner, no family visiting, no going to the city to go shopping.”

On the Cardinals’ readiness without an exhibition season:

“It’s definitely unique. There’s no question. The intensity, the sense of urgency, the nervousness will be heightened greatly that first quarter and there will be a settling in period. As coach you worry about tackling and limited game situations.”Related Articles

The Deets: Kyle Shanahan might need to re-invent the 49ers’ offense in 2020