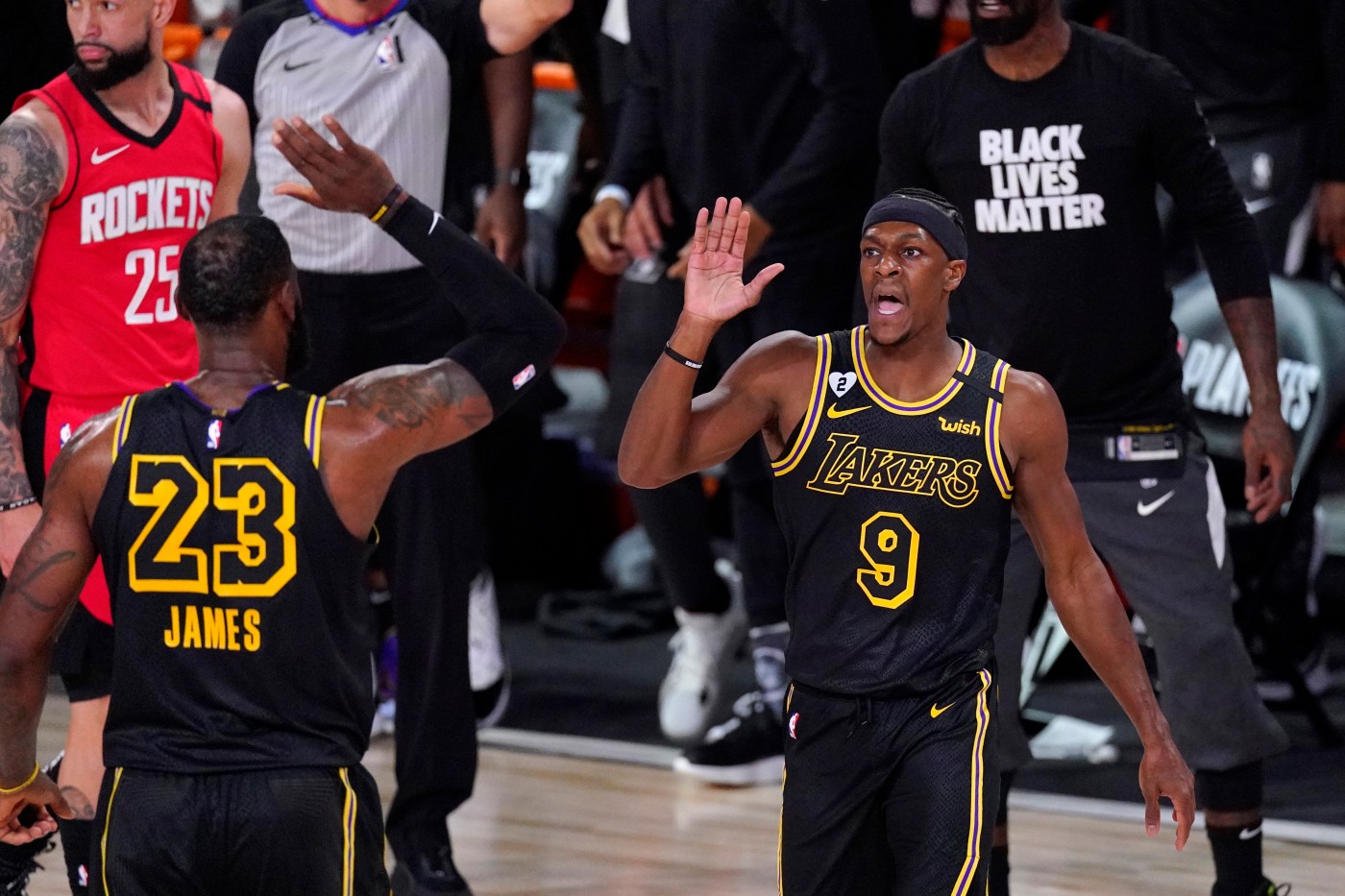 Editor’s note: This is the Wednesday, Sept. 9, edition of the Purple & Bold Lakers newsletter from reporter Kyle Goon, who is among the few reporters in the country with a credential inside the NBA bubble. To receive the newsletter in your inbox, sign up here.

LAKE BUENA VISTA, Fla. — He doesn’t always arrive on time, so he’s not like Santa Claus. But he’s not so rarely glimpsed as Bigfoot.

So it’s hard to find the perfect match among mythic characters for Playoff Rondo — most importantly because he’s not mythical at all.

The side of Rajon Rondo the Lakers have wanted to see the most has come out in round two of these playoffs against the Houston Rockets. In Game 3, he had 21 points and nine assists, but those numbers don’t truly illustrate the leap he’s taken from being a bit player averaging 7.1 points and 5.0 assists this season — at many points not looking playable.

Since Rondo has been a Laker, there’s been a disconnect between how teammates and coaches glowingly measure his impact next to that of LeBron James, and how fans see an aging point guard who has rarely looked at his All-Star level. In the last two games, Rondo has started to bridge that gap.

“It’s real: Playoff Rondo is real,” Anthony Davis said. “His intensity picks up, he wants to guard the best perimeter guy. We see he guards James and Russ sometimes, he wants to… on the floor he’s shooting the ball very well, making the right passes, so his IQ is on another level.”

Rams at Philadelphia Eagles: Who has the edge?

Historically, Rondo has distaste when people point out the difference between his regular season persona and who he is in the playoffs. But there’s a definitive gulf: His scoring, assists and net rating all rise in his playoff career versus his regular season career. He’s tied for fourth on the postseason triple-doubles list (10), and two of the four guys ahead of him are on the Lakers sideline.

But to really appreciate Playoff Rondo, you have to examine where he really shines. Looking at his Game 3 dimes, it’s telling to see how they came: off verticality, like the two times Davis spun off of his man, and Rondo delivered a picture perfect lay-up. They also came on cuts, like a bounce pass to a driving Kyle Kuzma in the fourth quarter that was close to a clinching basket.

These are advantages the Lakers have on the Rockets, size and the ability to rip into the lane, that weren’t being leveraged in Game 1, Rondo’s first game back in six months. His passing has helped make those advantages manifest, giving the Lakers’ length a sense of purpose that can win games. In a game that is decided in flashes, in tiny creases of space and time that can be the difference between a basket and having your shot blocked into the sun, Rondo can play physically and mentally at full speed.

Markieff Morris breaks out for Lakers in Game 2 win

Monterey Jazz Fest will be back this year, virtually