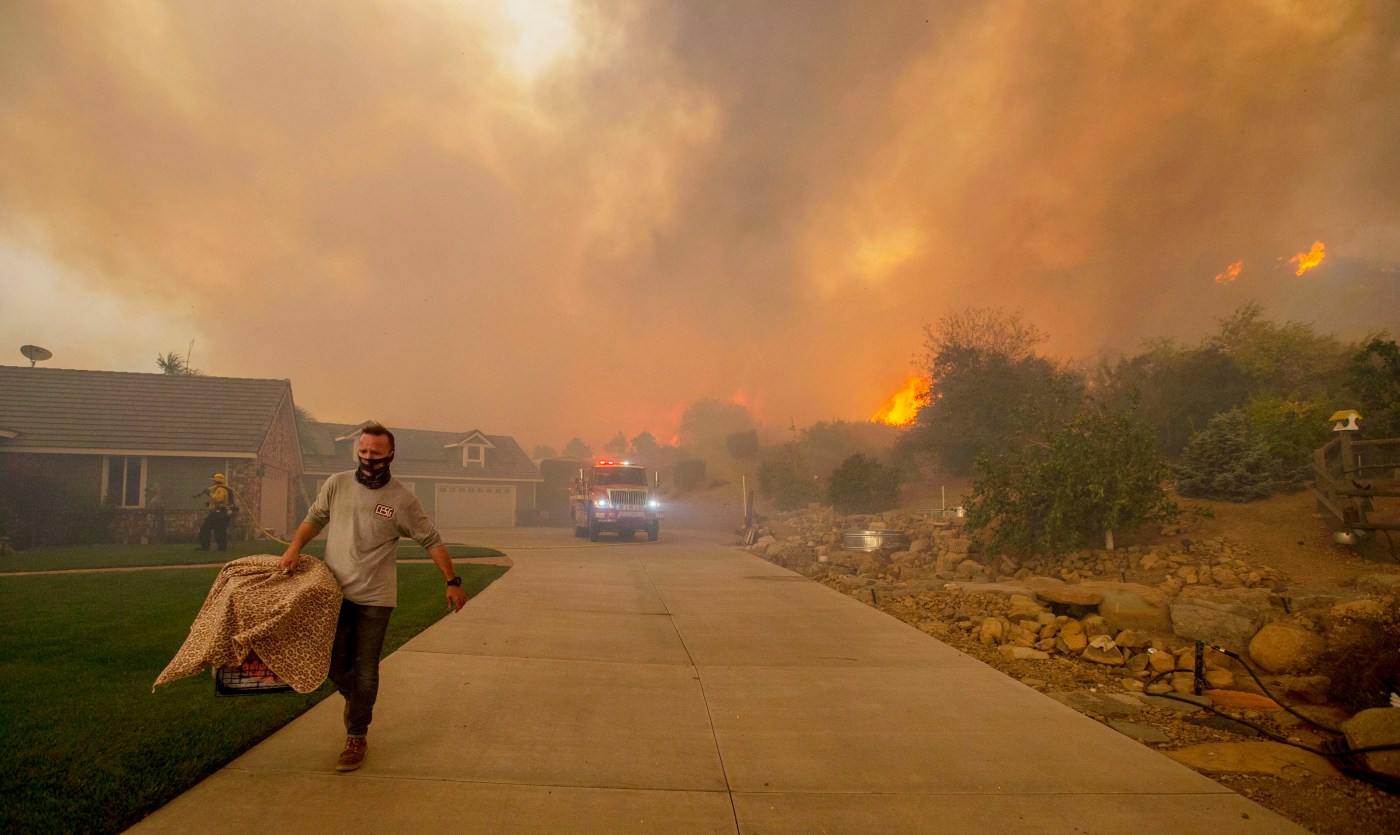 The pattern, caused by four fires still burning in Los Angeles, San Bernardino and Riverside counties, is producing columns of smoke that collapse, spreading lung-damaging soot for hundreds of miles.

The Santa Anas are not good news for firefighters battling the two most troublesome fires, El Dorado near Yucaipa, and Bobcat above Duarte. A red flag warning went into effect late Tuesday. Homes could be threatened if the winds carry flames down the canyons.

The coming hot winds — normally seen in October through December — are an anomaly for early September. That is part of the confusing weather pattern that not only hampers firefighting efforts but plays havoc with the air quality of 22 million basin residents.

“Anytime we have significant wildfires they produce a lot of smoke. Smoke is a mixture of all pollutants, including very small particles called PM2.5 that can be breathed deeply into the lungs,” said Jokay Ghosh, health effects officer for the South Coast Air Quality Management District.

In the mountain communities of San Bernardino County on Tuesday, as well as Redlands, Loma Linda and Yucaipa, the SCAQMD said the air was unhealthy, meaning a person’s asthma or heart condition could be exacerbated by going outside, Ghosh said.

Dr. Cameron Kaiser, Riverside County public health officer, said residents in those areas should avoid strenuous activity and remain indoors with the air conditioning on and the windows and doors closed. The air was unhealthy for most of the Coachella Valley and eastern Riverside County, the AQMD reported.

With Santa Ana winds, they may blow away the smoke into the ocean or if they are weak, as predicted, they may not have the force to clear the air, air quality experts explained.

“A good piece of guidance is, if you smell smoke or see ash in your area, try to stay indoors as much as you can,” Ghosh said.

Wildfire smog is increasing and will only get worse, as climate change raises the temperatures on the ground. On Sunday, Woodland Hills reached 121 degrees — a record high.

More heat waves with higher temperatures are causing more wildfires across the state —  a record 25 were burning Tuesday. So far this year, 2.2 million acres have charred, …read more

Dwight Howard brings energy to the bench, while trying to grind out the bubble time