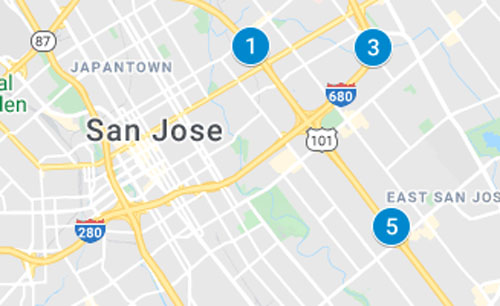 Six people have been killed in traffic accidents in the Bay Area since last weekend — two pedestrians, two motorcyclists, a bicyclist and a driver.

Click on the links for the article about each crash.

Sept. 12, San Jose; Highway 101 and McKee Road. A pedestrian was fatally struck by a southbound car around 8 p.m. The victim was identified as Gabino Garcia-Chavez, 38, of San Jose. The driver and a passenger in the car were injured.

Sept. 13, Newark; Highway 84 near Thornton. Michael D. Thomas, 40, of Palo Alto, was killed when his motorcycle was hit from behind by a BMW in the eastbound lanes around 2:20 a.m. The car’s driver was arrested on suspicion of driving under the influence of alcohol or drugs. Another person on the motorcycle was injured.

Sept. 13, San Jose; Interstate 680 near Jackson. A 36-year-old Merced woman was killed when she lost control of her motorcycle and was hit by two cars in the northbound lanes around 10:30 p.m.

Sept. 15, San Jose; Highway 101 and Tully Road. A 22-year-old San Jose man was killed when his Honda Accord hit the back of a big rig in the northbound lanes around 1:15 a.m.

Bicyclist killed in collision with van in Oakland