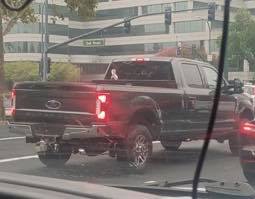 The California Highway Patrol is looking for the driver of a pickup truck who they said is suspected of fleeing the scene after hitting a 78-year-old pedestrian last week in Concord.

The woman survived but suffered a broken hip, cuts, and bruises, the CHP said. Another citizen helped her to the sidewalk, and medics treated here there, the agency said. The collision happened on Sept. 10 around 8:50 a.m.at the intersection of Treat Boulevard and Cherry Lane, according to the CHP.

The CHP posted a picture of the dark gray pickup truck on social media Wednesday. They described the truck as a newer model from the Ford F series with an extended cab that was clean. They did not have a complete description of the driver, though the CHP said witnesses told officers it appeared to be a man on his cell phone.

According to the CHP, the collision happened as the woman started to cross Treat Boulevard in a crosswalk, and the truck turned right onto Treat from Cherry Lane.

The truck continued to drive west on Treat Boulevard after the collision, the CHP said.

Anyone with information on the collision or the truck can call the CHP’s Contra Costa office at 925-646-4980.