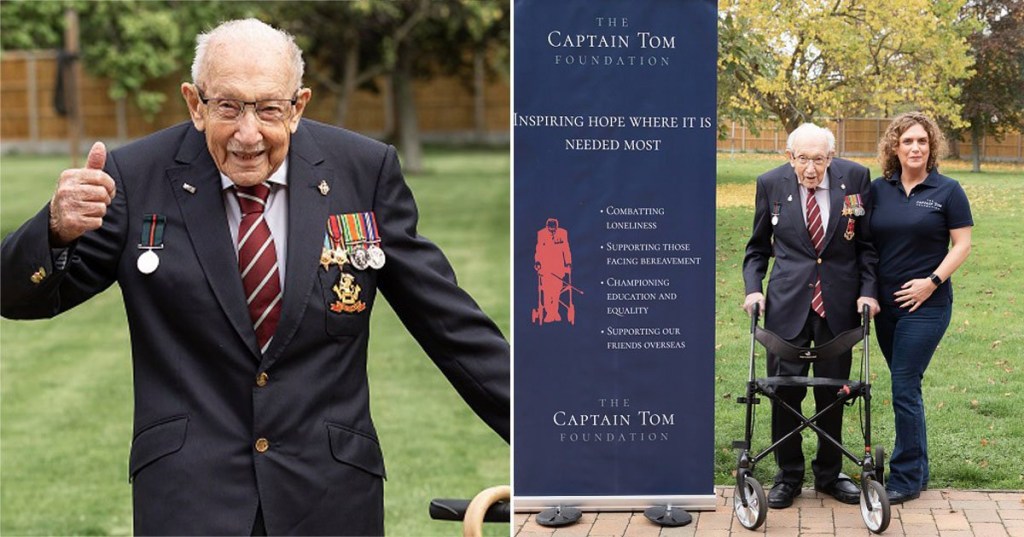 Captain Sir Tom Moore’s family will honour one of his final wishes with a global fundraising drive marking what would have been his 101st birthday.

His daughter Hannah Ingram-Moore told Metro.co.uk that the eternal optimist will be here in spirit as she unveiled the Captain Tom 100 challenge through a Foundation set up to continue his phenomenal work.

The drive will mark what would have been his 101st birthday on April 30 and take place over the bank holiday weekend, a milestone he had been eager to play a leading role in, even as he spent his final hours in hospital.

The World War Two veteran’s family is inviting people to take on a challenge of any kind themed around the number 100 and complete it by the Monday, donating either to the Captain Tom Foundation or a charity of their choice.

Today marks a year since he began his record-breaking fundraiser in the village of Marston Moretaine, Bedfordshire, aiming to complete 100 circuits of his garden for his 100th birthday, with the target of raising £1,000 for NHS Charities Together.

Within three weeks, the amount had rocketed to £38.9million and he became a symbol of hope in troubled times.

Ms Ingram-Moore said: ‘We are just an ordinary family who have been on an extraordinary journey.

‘Apart from being knighted by the Queen, the Captain Tom Foundation was the next most proudest thing my father had achieved.

‘He couldn’t believe a charity had been set up in his name but at the same time realised it could do such incredible things.

He felt absolute joy at having achieved that. That responsibility I can only describe as like holding a mix of bone china and gold dust in your hands, you don’t want to run too fast with it and you hope the wind doesn’t blow.

‘We’ve been handed an incredibly powerful gift of a voice and a platform from a magical year and we are sharing that gift of hope with the world for the Captain Tom one hundred.’

Captain Sir Tom Moore wanted to leave hospital and host his 101st birthday celebrations which are now being honoured by his family (Picture: The Captain Tom Foundation)

Captain Tom died on February 2 after losing his fight with pneumonia and Covid in Bedford Hospital.

His roll call of achievements included being knighted by the Queen at Windsor Castle, recording a UK No1 single with Michael Ball, being entered in the Guinness Book of Records for the most money raised by an individual charity walk and being made an honorary Colonel at Harrogate Army Foundation College.

Even in his final hours, the national treasure wanted to leave hospital and continue his fundraising campaign for his birthday.

Sex offender murdered ex-wife and told daughter, 5, it was a nightmare before killing himself