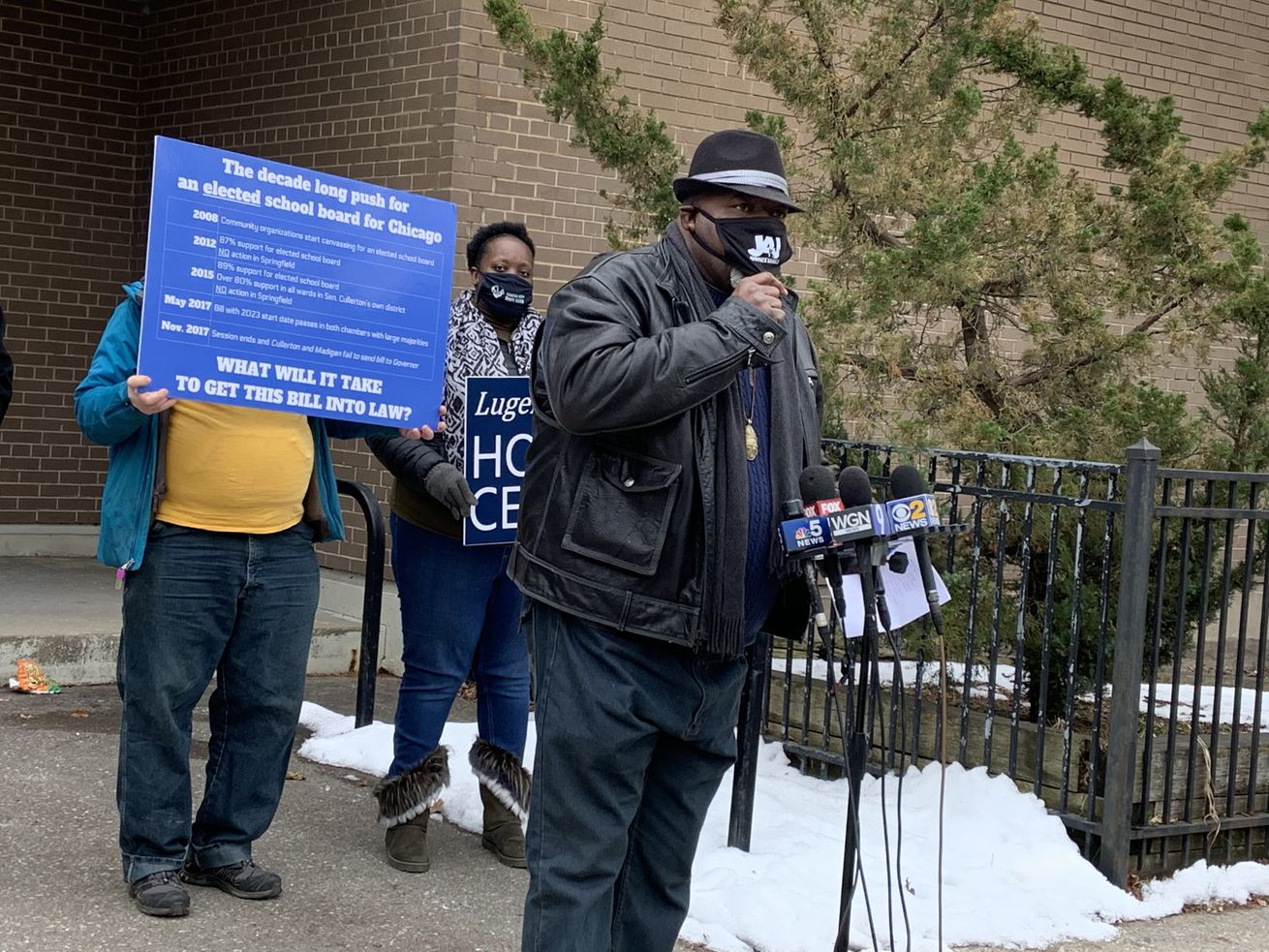 Jitu Brown, national director of the Journey for Justice Alliance, a grassroots racial justice and education organization, speaks at a press conference Sunday. Black and Brown Chicago Public School families are calling for legislation to have an elected school board. | Clare Proctor/Sun-Times

Community groups are urging Illinois Senate President Don Harmon to allow that chamber to vote during this week’s lame-duck session on a bill to do away with an appointed school board.

In 2012, Brenda Delgado spoke at her first Chicago Board of Education meeting. A parent of a child who attended Salazar Elementary, which was at risk of being closed, Delgado was “passionately crying,” urging board members to keep her child’s school open.

Board members were doodling in their notebooks, said Delgado, of Washington Park. She is one of many Black and Brown families with children in CPS advocating for a fully elected school board, which is now appointed by Mayor Lori Lightfoot.

More than a dozen community organizers are calling on Illinois Senate President Don Harmon to allow that chamber to vote on a bill that would allow Chicago residents to elect their school board, which is what happens in the more than 800 other school districts across the state.

“This is not a fight between [teachers] unions and the mayor,” said Moises Moreno, director of Pilsen Alliance, one of the community groups who want the legislation voted on during this week’s lame-duck session. “This is a fight of community, of parents, youths. We want our voices heard.”

Introduced in 2019, HB 2267 would amend Illinois’ election code to allow an election for members of the Chicago Board of Education. The Illinois House of Representatives passed the bill in April 2019 by a nearly unanimous vote. But in May 2019, Lightfoot asked then-Senate President John Cullerton to hold the bill to give her more time to review the proposal, although she had supported an elected school board while running for mayor.

Supporters of an elected school board planned to continue their fight when the General Assembly reconvened in January 2020, but the pandemic put the legislation on hold. Now, the Illinois General Assembly is in a five-day, lame-duck session before the new session is scheduled to begin Jan. 13.

WandaVision: What time is Marvel’s new TV series being released on Disney Plus?

Jitu Brown, national director of the Journey for Justice Alliance, said Lightfoot has “violated” the trust of Chicago residents of color.

“It doesn’t matter what color she is — what matters is the belief system that guides her actions,” Brown said. “And if your belief system says that we don’t matter, our voices don’t matter, I don’t care if you’re Black, Brown, white or blue. You are not our friend.”

Rod Wilson, a CPS parent and executive director of the Lugenia Burns Hope Center in Bronzeville, said having an appointed school board is a “racist act” that leaves students of color with a school board that isn’t accountable to the community.

Having board members face reelection would keep them accountable to CPS students and families, Wilson said.

Neither the mayor’s office nor CPS responded …read more

Should you wear a face mask outdoors?

Dad told son, 8, to shoot chicken with crossbow after tying it to tree