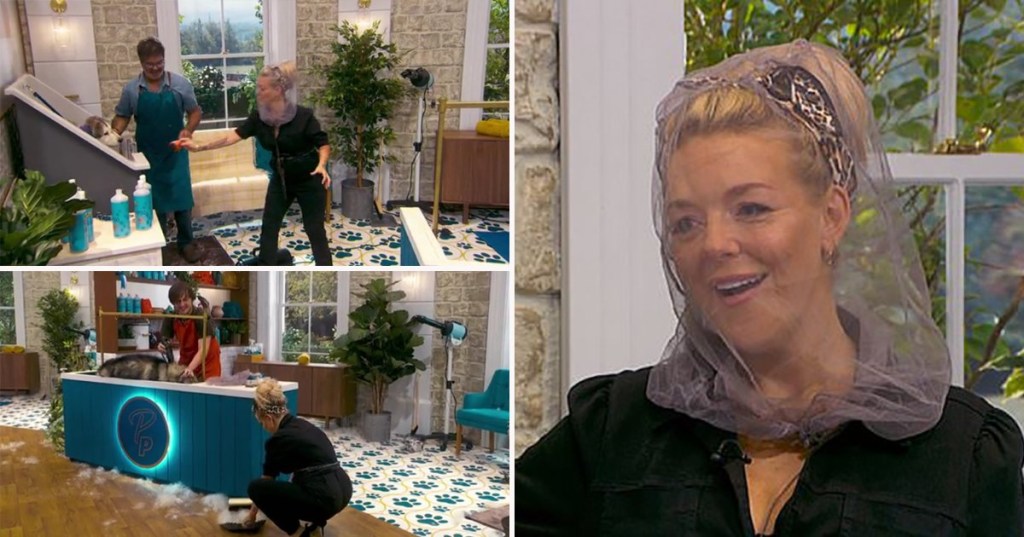 Sheridan mucks in with cleaning duties on the latest episode of Pooch Perfect (Picture: BBC)

Sheridan Smith is more than willing to get her hands dirty in a first look at the new episode of Pooch Perfect.

Last Thursday, the BBC’s new dog grooming show Pooch Perfect aired its first episode, with viewers describing it as the ‘perfect antidote’ during these difficult times.

Hosted by West End star Sheridan, the programme sees professional dog groomers pitted against each other to see who can groom different breeds of dogs the best.

In an exclusive first look of the second episode shared by Metro.co.uk, Sheridan appears keen to get stuck in with the competitors as they take on the challenge of grooming a pack of very large and hairy Alaskan Malamutes.

In a clip, Sheridan chats with contestant Lakhi while wearing a protective face and hair net.

‘That’s very fetching, have I got one?’ Lakhi asks her.

‘Yes! Do you not know? I’ll get it for you! Here look,’ Sheridan responds as she dashes to get the net for him.

‘We can match,’ Lakhi states, as Sheridan leaves the net on the ledge of the Alaskan Malamute’s bath.

In another clip from the show, Sheridan decides to help clean up as dog groomer Tom busies himself with his canine client.

‘Hello Tom. Shall I clean a bit of this up for you yeah?’ Sheridan states, holding a dustpan and brush.

With little concern for her fashionable ensemble, the Two Pints of Lager and a Packet of Crisps actor kneels down to sweep up the dog’s fur… and boy is there a lot!

Sheridan is happy to help clean up while the dog groomers get to work (Picture: BBC)

In addition to grooming Alaskan Malamutes, the second episode of Pooch Perfect will see four dog groomers tackle the task of giving some fluffy puppies their first ever grown-up haircut.

The puppies’ owners will later take a look at their pets’ new looks when they are revealed on the Dogwalk.

The first episode of the competition saw three contestants showcase their dog grooming skills on breeds including Shih Tzus and Poodles.

Death In Bollywood: Who is Sooraj Pancholi and how is he connected to Jiah Khan?

It was recently announced that Pooch Perfect will be making its way to the US, hosted by Pitch Perfect star Rebel Wilson.

Having previously launched the show in her native Australia, Rebel will be joined by reality star Lisa Vanderpump as one of the three judges.

Dave Bautista offers $20,000 to catch whoever carved ‘Trump’ onto manatee’s back

Bulls bounce back in victory over Mavs, finding a different way to win