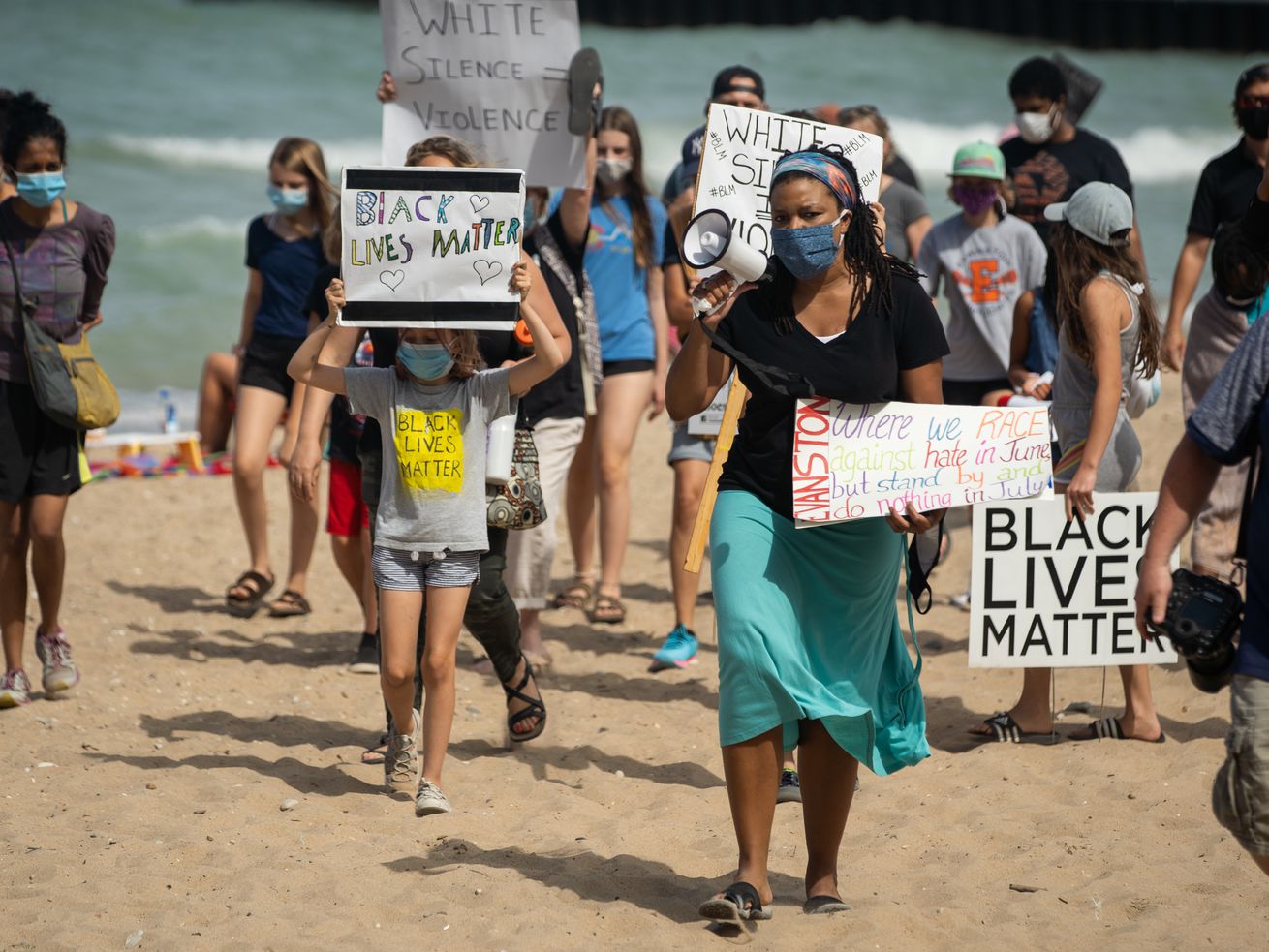 People attend a racial justice rally at Lighthouse Beach in Evanston Friday after a group of white people displayed a Confederate flag at the beach earlier in the week. | Pat Nabong/Sun-Times

LaShandra Smith-Rayfield took a video confronting a man for hanging up his Confederate flag towel at Lighthouse Beach Wednesday. About 300 people gathered Friday to protest.

Just as problematic as the Confederate flag towel at an Evanston beach Wednesday, LaShandra Smith-Rayfield said, were the beach-goers who didn’t speak up about it.

“Me speaking out against hatred does not make me anti-patriotic,” Smith-Rayfield said at a protest Friday. “It actually makes me patriotic. … Every person on that beach walked past it. In my video, you can see people walk on past it. Why is it okay to walk on past it?”

Friday, more than 300 people circled around Smith-Rayfield, gathering at a protest outside Lighthouse Beach in North Evanston Friday. Smith-Rayfield and other organizers called out other people at the beach Wednesday who didn’t take action when a white man at the beach hung a Confederate flag towel on the fence, as well as people who stay silent in the face of racism.

Pat Nabong/Sun-Times
LaShandra Smith-Rayfield tears up while speaking at a racial justice rally Friday afternoon after she confronted a group of white people displaying a Confederate flag at the beach Wednesday. | Pat Nabong/Sun-Times

On Wednesday, a beach goer set up camp at Lighthouse Beach and hung a towel displaying a Confederate flag on the fence. Photos of the towel hit social media, and when Smith-Rayfield saw, she got in her car, drove to the beach and called the man out, demanding he take down the Confederate flag. She streamed the encounter in a video on Facebook Live. The video also shows an African-American man who engaged in the argument and identified himself as a veteran.

The man, who asked to remain unnamed out of fear for his safety, told the Sun-Times he didn’t get to finish what he was saying in the video. He said he served in the military so people could have a “right to have a different opinion.” If the men with the flag would have started attacking Smith-Rayfield, the man said he would have defended her as well.

The man said he disagreed with the symbol and even intentionally sat next to the group with the Confederate flag, hoping to have a conversation with them about why the flag is wrong.

“I was going to do it discreetly,” he said. “All I did was defend their right to have a different idea.”

He said they eventually agreed to remove the flag at his request; one can be seen shaking his hand in the video.

Candice Shakur, her husband Abdel and their kids Lucille, Benjamin and Sunny attend a racial justice rally at Lighthouse Beach.

Smith-Rayfield deleted the video Thursday because of internet trolls calling her a terrorist and making threats, she told the Sun-Times Friday. …read more

How will Kanye West affect the presidential race? Will he really hurt Joe Biden?