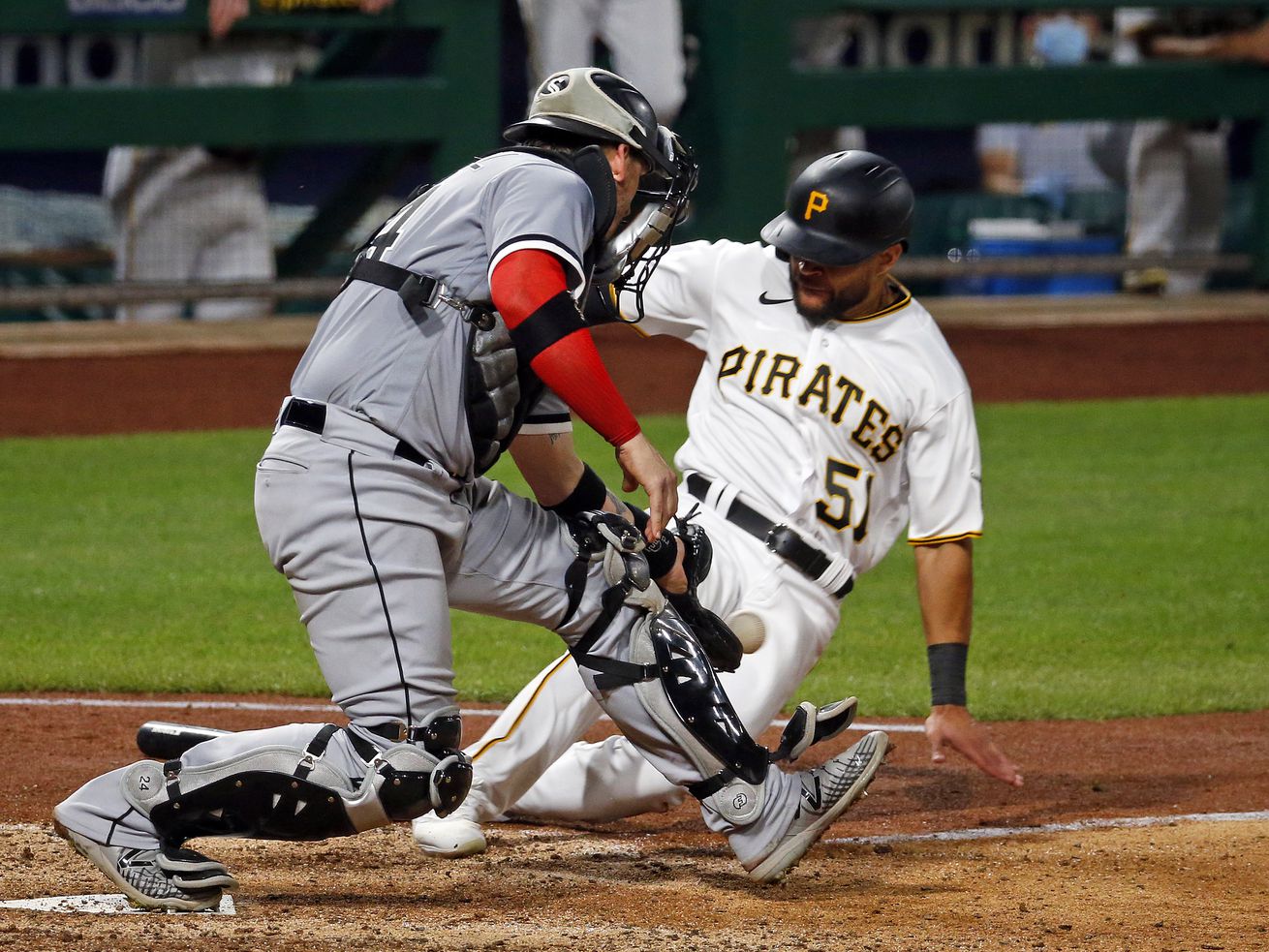 Jason Martin #51 of the Pittsburgh Pirates scores on a fielder’s choice in the ninth inning against Yasmani Grandal #24 of the Chicago White Sox at PNC Park on September 8, 2020 in Pittsburgh, Pennsylvania. (Photo by Justin K. Aller/Getty Images) | Getty

Nick Madrigal thrown out at home and third base, Tim Anderson picked off and Yasmani Grandal drops the ball giving Pirates walk-off victory

Dylan Cease looked like he was on his way.

To lasting longer than five innings, that is, which would be considered a moral victory these days for the White Sox.

But Cease, who encountered difficulty in a two-run fifth after breezing through four innings, had to settle for another short start of five-plus innings and the Sox bullpen couldn’t hold off the Pirates who won 5-4 in the ninth inning against Jimmy Cordero. With the bases full and no outs, Cordero fielded Kevin Newman’s slow roller in front of the mound and would have forced pinch runner Jason Martin at home, but catcher Yasmani Grandal dropped the underhand throw.

The Sox, who have won 16 of their last 21 games, had a four-game winning streak snapped.

This loss was an unsightly one, with two baserunning blunders by rookie Nick Madrigal, one by Tim Anderson a wild pitch by Cordero in the ninth and the Grandal drop. Had Grandal held on, Cordero would have been faced with a one-out, bases loaded predicament.

“There were a couple of things especially on my part,” Madrigal said.

“I know we can play better baseball but I know this one hurts.”

Manager Rick Renteria pulled Cease with a one-run lead at 79 pitches after Adam Frazier led off the sixth with a single.

Cease seemed to understand the reasoning behind the quick hook but also seemed to think he had enough to keep going.

“I understand we’re treating every game like the playoffs,” Cease said. “At this point I pitch when told to pitch and come out when I come out.

“I did pretty well. I’m happy with the fact I didn’t walk anybody.

“It was a tough one but we’ll come back tomorrow.”

Renteria called on Codi Heuer in the sixth, Matt Foster in the seventh and Evan Marshall in the eighth. Heuer and Foster were flawless but the plan unraveled when Marshall gave up two runs to tie it up and Ross Detwiler gave up singles to Gregory Polanco and Josh Bell to open the ninth.

The Sox (26-16) blew a chance to take sole possession of first place in the AL Central with the the Indians (26-16) also losing.

Sox starters have produced but one outing beyond five innings in the rotation’s last 11 starts and could only get through 4 1⁄3 and five innings against the Royals in his last two. He opened with a 13-pitch, 10 strike first that set a good tone and faced the minimum 12 batters through the first four innings and led 3-0 on Grandal’s two-run homer in the fifth.

Before Grandal’s homer, his sixth and his eighth hit in 17 at-bats, Anderson raced …read more

5 things for Houstonians to know for Wednesday, Sept. 9