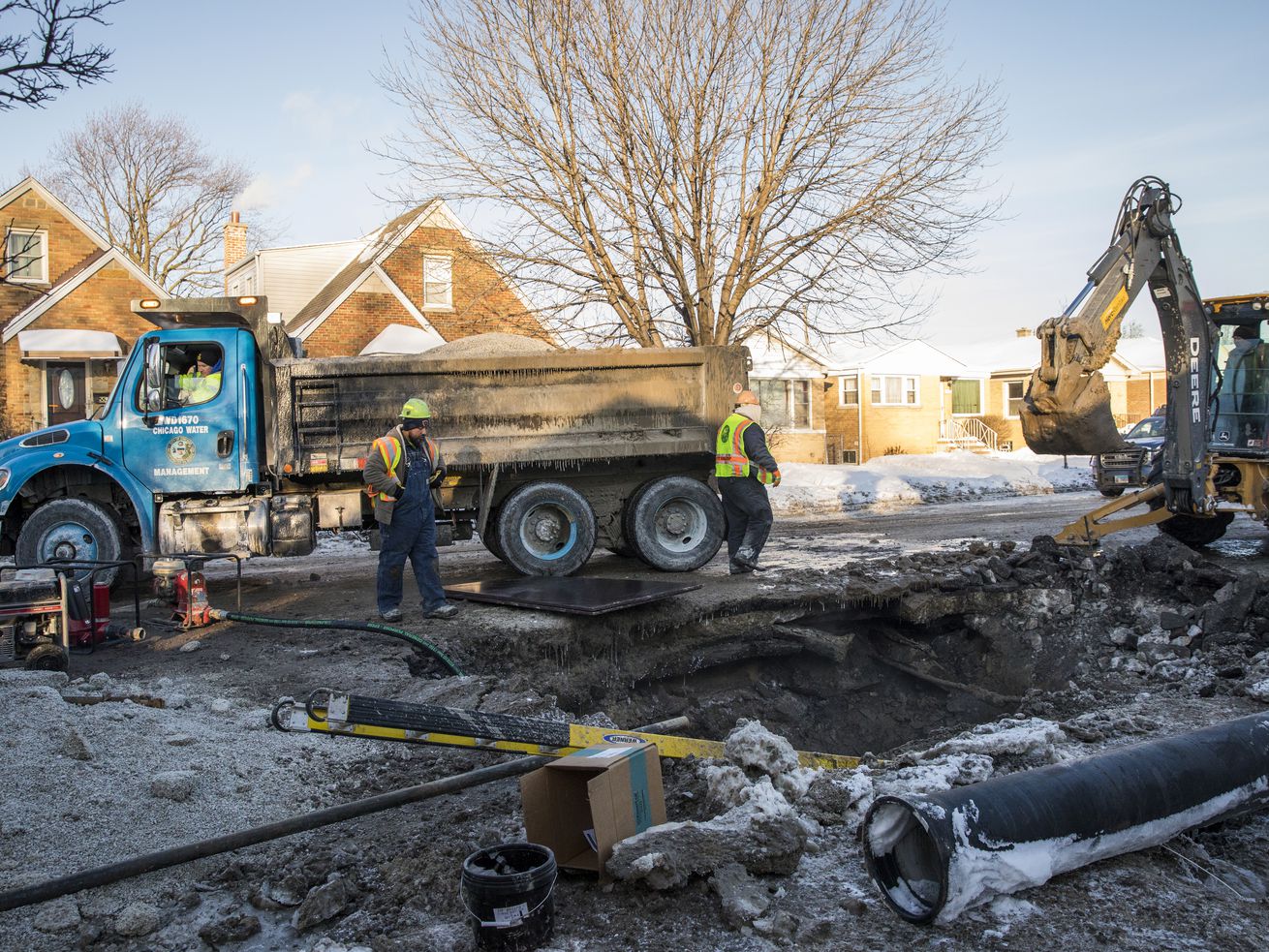 The Chicago Department of Water Management — shown fixing a water main break on the Northwest Side last year — will be replacing lead service lines carrying water from the mains into homes and other buildings. A pilot program announced Thursday will replace the service lines for 750 homes in impoverished areas. That $15 million pilot program will be paid for with federal Community Development Block Grant funds. | Sun-Times file

For now, the city is replacing lead service pipes at only 750 homes in impoverished neighborhoods. If owners hire and pay for their own contractors, the city will waive up to $3,300 in permit fees, connect the new line to the water main and install a free water meter.

Mayor Lori Lightfoot has accused her predecessor of punting a $10 billion problem and said the “time of reckoning is now” for replacing lead service lines carrying water from street mains to nearly 380,000 Chicago homes.

But the plan she unveiled Thursday is more like dipping your toe in the water than diving right in.

Instead of asking all Chicago homeowners to share the cost, Lightfoot will start small. The city will replace lead service pipes at only 750 homes in impoverished Chicago neighborhoods.

For homeowners willing to hire their own contractors and assume replacement costs themselves, the city will waive up to $3,300 in permit fees, connect the new service line to the water main and install a free water meter when the project is completed. To qualify, it must be a “stand-alone” request not related to a home renovation or expansion that requires a larger water line, officials said.

The so-called “Equity Lead Service Line Replacement Program” covers less than one-thousandth of 1% of the universe of endangered Chicago homes.

“It’s a press release without substance. Saying it lacks substance would be complimentary. It tries to create the perception that they’re doing something when they’re not doing anything at all.”

In a press release announcing the program, Lightfoot argued that approach underscores her “equity-forward approach to providing residents the support they need, all while providing a foundation to continuously building on our commitment to addressing this important issue for the long-term.”

The $15 million pilot program will be paid for with federal Community Development Block Grant funds.

To qualify for what the city calls “free, full lead service line replacement,” Chicagoans must: own the homes they live in; have a household income below 80 percent of the area median income, or $72,800 for a family of four; and have “consistent lead concentrations in their drinking water above 15 parts-per-billion.”

Qualifying single-family homes and two-flats without water meters will receive one at the time the service line is replaced.

In an interview with the Chicago Sun-Times last week, Chief Financial Officer Jennie Huang Bennett acknowledged for the first time that Chicago homeowners will ultimately be required to share the cost of replacing lead service lines through yet another increase in their …read more

For Ben Skowronek, it’s all about the blue (and gold) genes

Prosecutor looking into the origins of Russia probe resigns