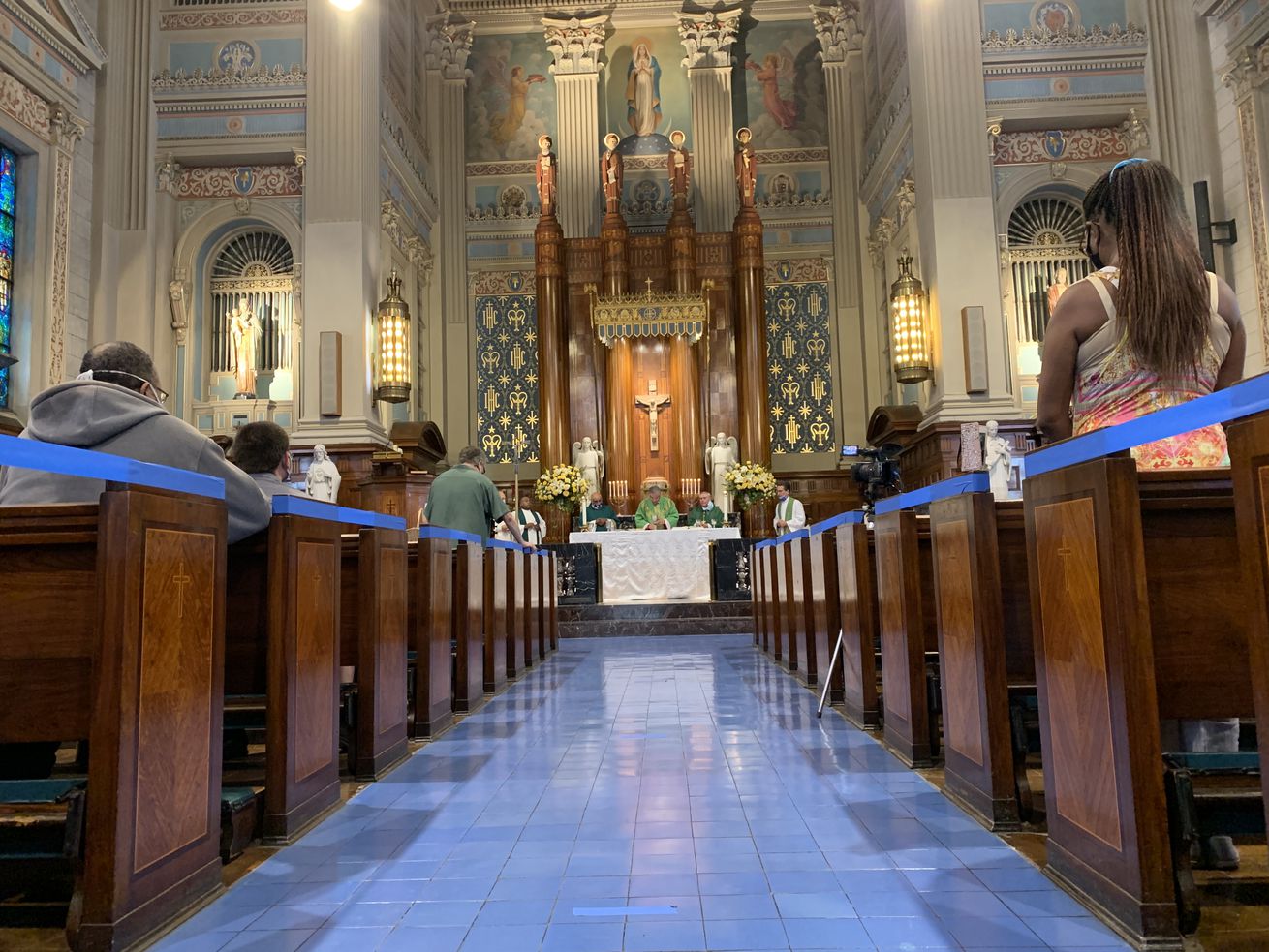 Because of COVID-19 safety guidelines, only 100 people were allowed to attend the final mass at Our Lady of Peace Catholic Church in South Shore. | Tom Schuba

“It’s almost like a funeral. But it’s a celebration, too, because all funerals are partial celebrations,” said one South Shore resident who co-chaired a committee to organize the final mass.

Our Lady of Peace Catholic Church in South Shore held its final mass Sunday, just a day shy of its 101st anniversary.

As part of the Archdiocese of Chicago’s ongoing consolidation efforts, Our Lady of Peace is among three Catholic churches on the South Side whose congregations will join St. Philip Neri, another parish in South Shore.

Longtime parishioners and others who were baptized and married at Our Lady of Peace came together one last time to worship and share memories of the church and its long-shuttered elementary school. Because state COVID-19 guidance limits church attendance to a maximum of 100 people, others with connections to the church watched via Zoom.

For many churchgoers, the service was bittersweet.

“It’s almost like a funeral. But it’s a celebration, too, because all funerals are partial celebrations,” said Valencia Ryas-Winstead, a South Shore resident who co-chaired a committee to organize the final mass. “You get to see people that you haven’t seen in a long time.”

Eileen Langan, of Oak Lawn, grew up in South Shore and was baptized at the church in 1954. She brought a photo of her first communion class to Sunday’s service, showing her and other kids posing in front of the church’s altar.

“It’ll always be my home church. That’s the way I think of it,” Langan said as she fought back tears.

Andre Rowell, who started coming to the church as a child in 1966, raised concerns about the closures and questioned why St. Philip was chosen as the new home base for all four congregations. He claimed Our Lady of Peace actually garnered the most support in a vote leading up to that decision.

Rowell said he and other parishioners sent letters to Cardinal Blase Cupich and Pope Francis seeking clarity on the decision but never heard back. A spokeswoman for the Archdiocese didn’t immediately respond to a request for comment.

“Half the membership’s not going to St. Philip’s because we don’t think it’s fair,” said Rowell, who graduated from Our Lady of Peace elementary school in 1972 and now serves as head of the alumni committee.

Tom Schuba
Andre Rowell graduated from Our Lady of Peace elementary school in 1972.

When Rowell started at the school, which closed in 1999, he was one of less than 10 African Amercan students. After decades of demographic change to the neighborhood, the final makeup of the church and its leadership was largely Black. As Rowell sees it, parishioners like him are now being pushed to an “all-white church.”

Amid the …read more

Asia shares rise as investors look ahead to Fed meeting

Father gets 30 years after plea in death of Illinois boy, 5