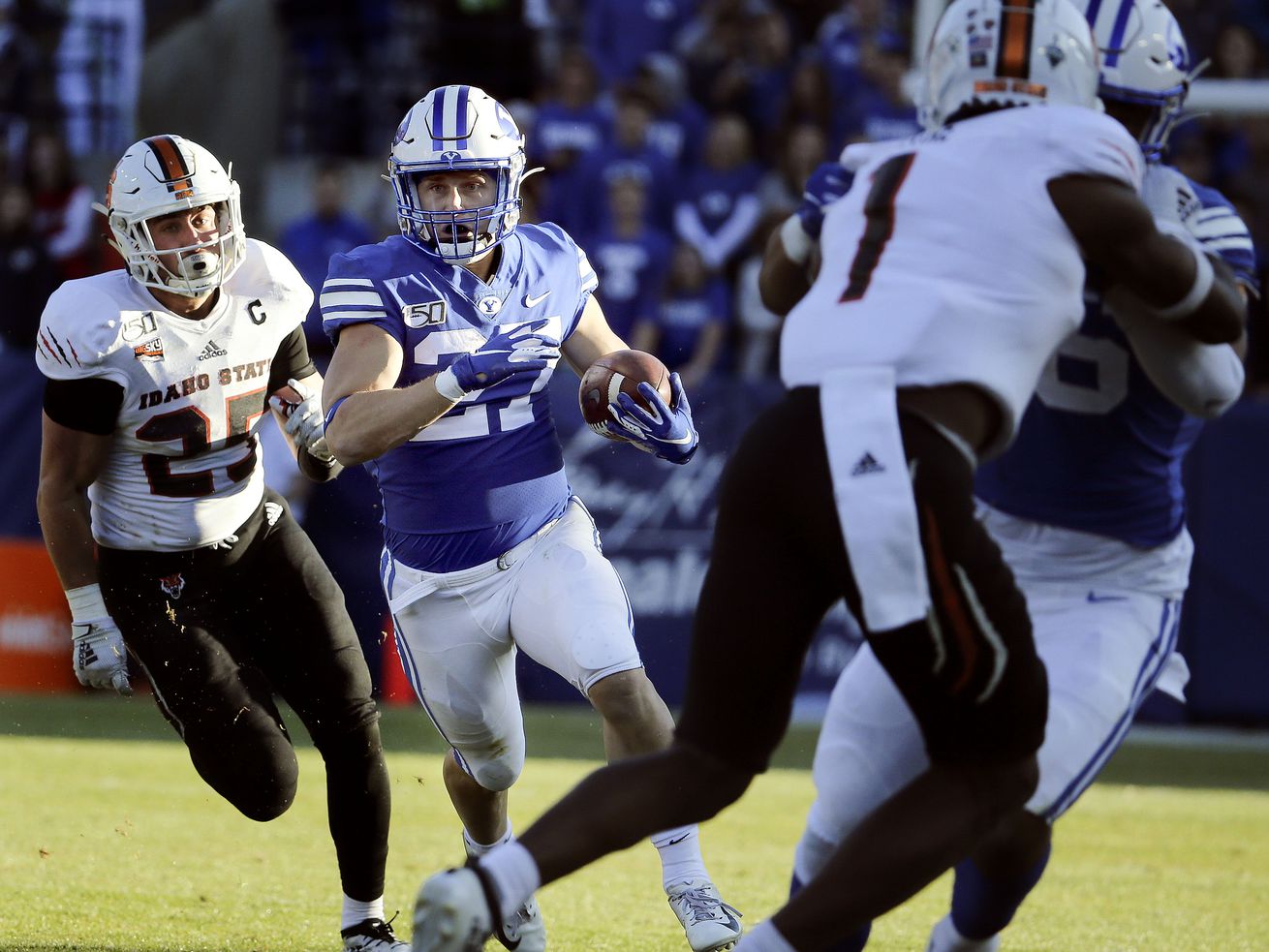 Could a player from another position emerge as a contributor in the offensive backfield for the Cougars?

PROVO — BYU backup running back Jackson McChesney made quite an impression in the Cougars’ season-opener at Navy.

The 6-foot, 205-pound redshirt freshman from Highland rushed 11 times for 56 yards and a touchdown in Monday’s thumping of the Midshipmen. McChesney scored on a 9-yard TD run in the fourth quarter with a foot injury — known as a Lisfranc fracture — which will sideline him for the rest of the season.

“It’s unfortunate what happened to Jackson… But we’ll get him back. He’s a strong, resilient kid. He’ll get back with us soon and we’ll be ready to roll with him again.” — BYU coach Kalani Sitake

“It’s unfortunate what happened to Jackson. He did it early when he got into the game and he continued to play,” coach Kalani Sitake said Thursday night. “His last play in 2020 was a touchdown so that’s a good way to go out. But we’ll get him back. He’s a strong, resilient kid. He’ll get back with us soon and we’ll be ready to roll with him again. … That was tough because I know how hard he’s worked … to get to this point.”

Over the past several weeks, BYU’s running backs room has gone through a number of changes, including McChesney’s season-ending injury.

In July, running back Devonta’e Henry-Cole, a transfer from Utah, opted to transfer to Utah State. He was essentially replaced by junior college transfer Hinckley Ropati, who has been out with an injury. Then during fall camp, Bruce Garrett entered the transfer portal.

Meanwhile, sophomore Sione Finau, who finished the 2019 season with a team-high 359 yards but suffered a season-ending knee injury during a practice in November, is gradually returning from that injury.

McChesney is the second BYU offensive player to be lost for the season. Earlier this month, BYU tight end Matt Bushman suffered an Achilles injury and underwent surgery.

“I’m a little disappointed in some of the injuries that we’ve had. Hinckley Ropati is also injured,” Sitake said. “The sooner we get Sione Finau back, the better. He’s looking like he’s ahead of schedule in his conditioning and rehab and everything.”

“It seems that type of injury with the foot, specifically, the Lisfranc, has been an issue, whether it’s the shoes or the surface or the turf, I have no idea,” Sitake said. “We’ll have to keep moving along.”

So how does the Cougar offense adjust to the loss of McChesney, a former Lone Peak star?

Against Navy, the Cougars rushed for 301 …read more

The Latest: Osaka, Azarenka set for US Open women’s final