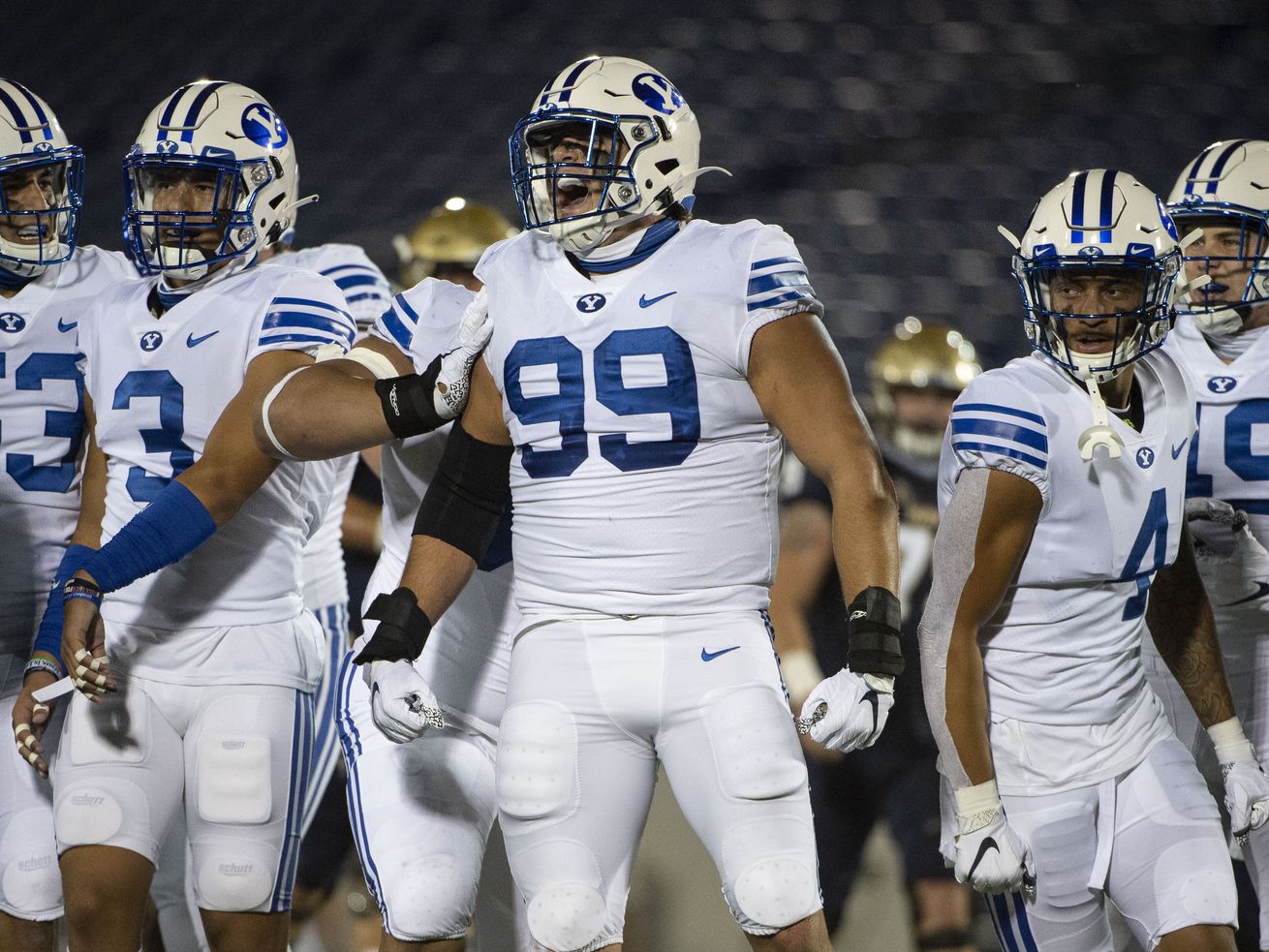 BYU’s Zac Dawe (99) reacts after making a play during the first half of an NCAA college football game against Navy, Monday, Sept. 7, 2020, in Annapolis, Md. | AP Photo/Tommy Gilligan

Showing they were far more ready for contact and physical play, the Cougars open the 2020 season with a near-flawless performance on both sides of the ball, especially defensively

As pretty of a performance in a season-opener in BYU football history, arguably, unless you were pulling for Navy. Then it was unimaginably ugly, and downright mean.

Clicking in every way possible, BYU blasted Navy 55-3, matching a 1986 win over Utah State, 52-0, as the largest margin of victory ever in a Cougars’ lidlifter. It was the worst loss in the brilliant career of Niumatalolo, once the leading candidate to replace Bronco Mendenhall at BYU before he turned the job down.

That triple-option attack that looked impossible to stop last year — with the great Malcolm Perry of the Miami Dolphins at the controls — was made to look utterly inept by Tuiaki’s defensive plan. Obviously, he got some help from guys who have seen the attack before — Ed Lamb and head coach Kalani Sitake, specifically.

“It was an awesome sight to see as a head coach,” said Sitake, who did get that job, promising to deliver the kinds of disruptive defensive lines he had as Utah’s defensive coordinator.

Remarkably, a dominant defense that Tuiaki claimed he had “zero” experience working with when it came to stopping the triple-option offense of Navy did just that. Tuiaki’s troops held the Midshipmen to a like total — no points — on the scoreboard before the reserves took over at the end of the third quarter and gave up a shutout-avoiding 48-yard field goal.

Meanwhile, Niumatalolo’s players that he said didn’t do any tackling or blocking in fall camp showed he wasn’t bluffing. For the home team in a game that was mercifully played without fans in the stands as a nod to the COVID-19 pandemic, it was an embarrassing display of the toughness and physicality that Navy supposedly possessed.

“It was all the coaches collectively,” said BYU defensive tackle Khyiris Tonga, who anchored the middle and almost singlehandedly took away Navy’s bread-and-butter, the fullback dive. “Everybody got to chime in.”

“That’s a hard question to answer, because I know how good Navy is. We played our ‘A’ game.” — BYU linebacker Pepe Tanuvasa, a former Midshipman, when asked if the lopsided score was indicative of the gap between the programs

It ended with BYU’s offense classily taking a knee in the waning moments, or it would have been worse, a sign of respect from Sitake to his fellow Laie, Hawaii, resident Niumatalolo after pupil out-coached mentor the entire night.

Actually, Sitake got a head start, choosing to “go live” early and often in fall camp, while the more pandemic-cautious Midshipmen avoided contact as much as possible. Big mistake. The Mids …read more