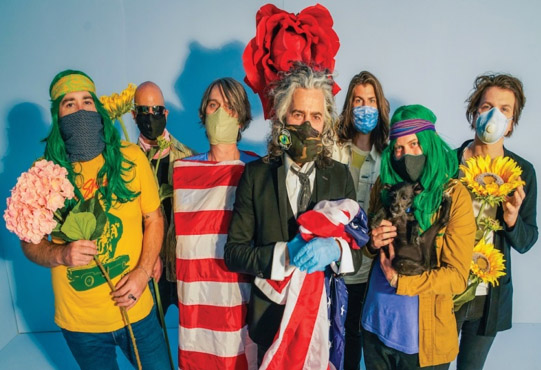 For the Flaming Lips, a feeling is always more important than a plan, singer Wayne Coyne says.

“We know that if we don’t go with the thing that we’re feeling then we don’t deserve to be the Flaming Lips,” he says near the end of a recent conversation about “American Head,” the band’s 21st studio album.

“That’s the thing that our audience has encouraged us to do,” Coyne says of the idiosyncratic path the Flaming Lips have forged over almost four decades of music. “It’s like, ‘Hey, man, if you find a  path that no one else was going on, (bleepin’) make that path. That’s what we want you to do.’”

And so for “American Head,” the Flaming Lips pulled a thread of inspiration from the 2017 death of singer-songwriter Tom Petty and wove it into an imaginary alternate history about an American rock ‘n’ roll band whose orbit linked Petty and the Heartbreakers to the Flaming Lips.

The Flaming Lips new album, “American Head,” comes out Friday, Sept. 11, 2020 after being delayed several times due to the coronavirus pandemic. The band did make videos during that time, following social distancing and personal protection recommendations — such as the mask they wear in this publicity photo — to make sure they and their crew were safe. (Photo by George Salisbury)

Sound
The gallery will resume inseconds

“Flowers of Neptune 6” is one of the first singles from the Flaming Lips new album, “American Head,” which arrives on Friday, Sept. 11, 2020. (Image courtesy of Warner Records)

Wayne Coyne of The Flaming Lips performs during day one of the three day music festival, Desert Daze, at the Lake Perris Recreation Area on Friday, October 11, 2019. (Photo by Drew A. Kelley, Contributing Photographer)

The first spark came days after Petty died in October 2017 as Coyne watched a documentary about the late rock star that mentioned a stopover in Tulsa, Oklahoma — the Lips’ home state — in 1974.

There, as the still-unknown Petty and the band Mudcrutch left behind their lives in Gainesville, Florida on their way to find stardom in L.A., the group that had yet to become Tom Petty and the Heartbreakers spent a few days in the studio, recording music that the public never heard, Coyne said.

What might have happened to those tracks, he wondered. Imagination took over from there.

“Once I started to go down that …read more

As Gov. Newsom weighs reparations bill, a scholar has a word of caution for California