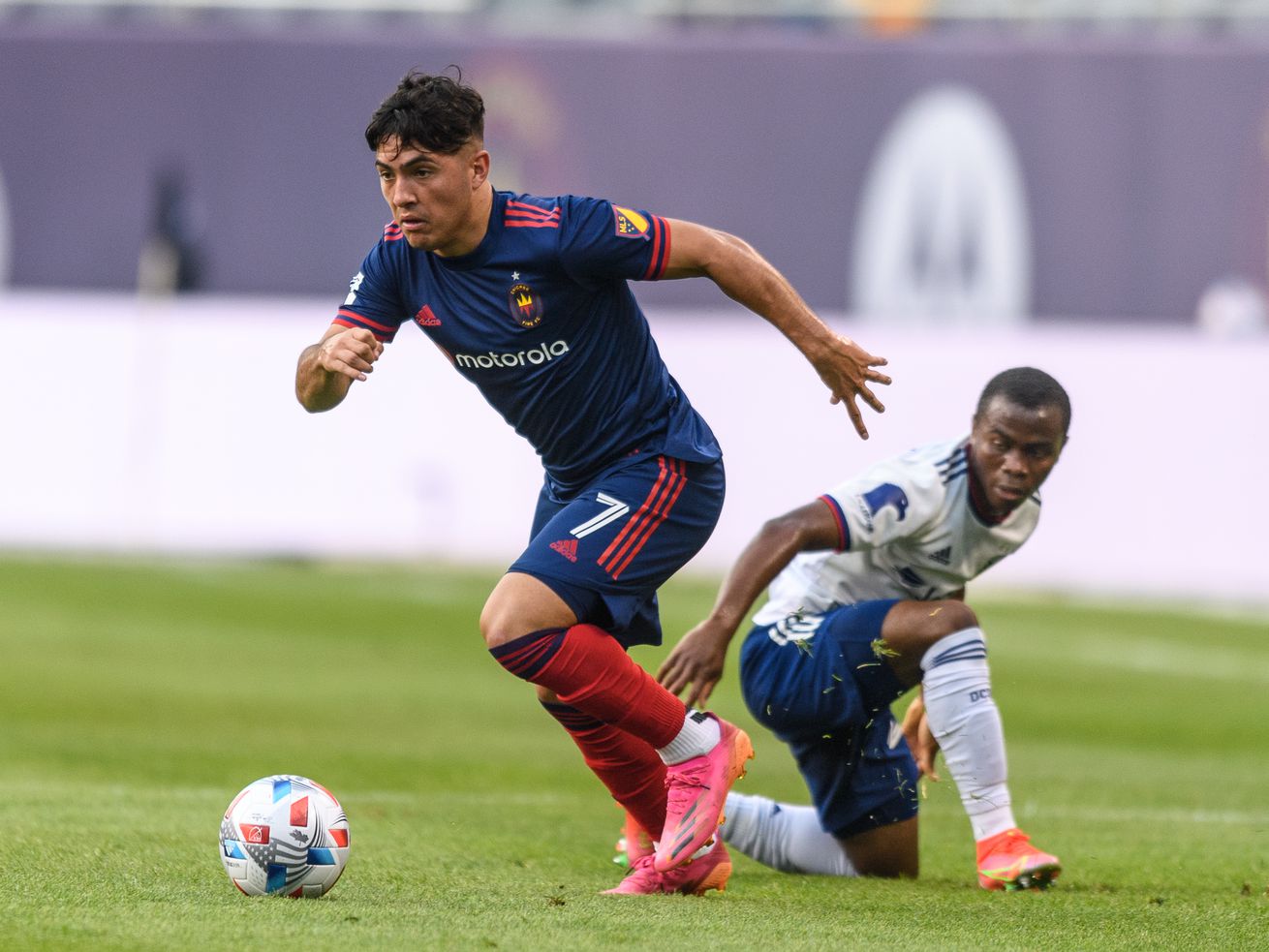 Ignacio Aliseda dribbles the ball during Wednesday’s game. | Courtesy of the Fire

The Fire squandered a two-goal lead in a 2-2 draw with D.C. United, and Mansueto said Monday the Fire are still focused on making the playoffs.

The Fire’s record isn’t what anybody around the franchise hoped for. After Wednesday’s 2-2 tie with D.C. United, the Fire are 3-8-3 and outside the Eastern Conference playoff picture.

“I don’t have plans to make any changes with Georg and Rapha,” Mansueto told the Sun-Times during a wide-ranging interview Monday. “I like working with both of them and have confidence in them. They are very knowledgeable about soccer, passionate, fully committed and engaged. I don’t see anything wrong that they are doing.”

Since becoming the owner of the Fire in Sept. 2019, Mansueto has played the long game, trying to create a sustainable product on and off the field. The team has invested in youth and is looking to build a state-of-the-art performance center that would benefit all aspects of the club.

When he spoke with the Sun-Times, Mansueto said “sometimes you need to iterate to get to success.” He noted the emergence of midfielder Alvaro Medran and attacker Ignacio Aliseda as examples of progress, along with a general uptick in play that recently netted the Fire seven points over three games.

For most of Wednesday, the Fire looked poised to recover from Saturday’s 5-1 loss to Nashville SC, taking a 2-0 lead on a goal from Gaston Gimenez and an own goal by D.C. United. But the edge didn’t last, as the Fire allowed second-half goals to Kevin Paredes and Ola Kamara to settle for the draw.

That won’t help the Fire, whom Mansueto said are still focused on making the playoffs. They entered Wednesday’s game six points out of the last spot in the East.

“A little slower start than we would have liked, but I think some momentum of note recently that we’re excited about,” Mansueto said. “I think the team is beginning to jell, and we’re feeling positive and optimistic.”

Those positive feelings extend to the sporting director and coach. Despite the record this year after missing the 2020 playoffs, Mansueto thinks Heitz and Wicky are doing the “right things for the long term” of the Fire.

“My management style is not a high turnover one,” Mansueto said. “My mindset is, how can I help them to be successful? We are all in this together.”

Not quite two years after buying out Andrew Hauptman, Mansueto is “loving it” and having a great time atop the Fire. He’s spent more time on the project than he expected, and is enjoying working with the people at the Fire and their fans.

As for the overall progress he expected at this point of his ownership, Mansueto said the development of the organization and personnel is where he wanted it to be, and that a lot is in place to build the fan base and a winning team …read more

Stock Market: Suez Canal Update! Floating!
NHS is as busy and pressured as it was in January, health leaders warn

Man shot while driving in Bronzeville