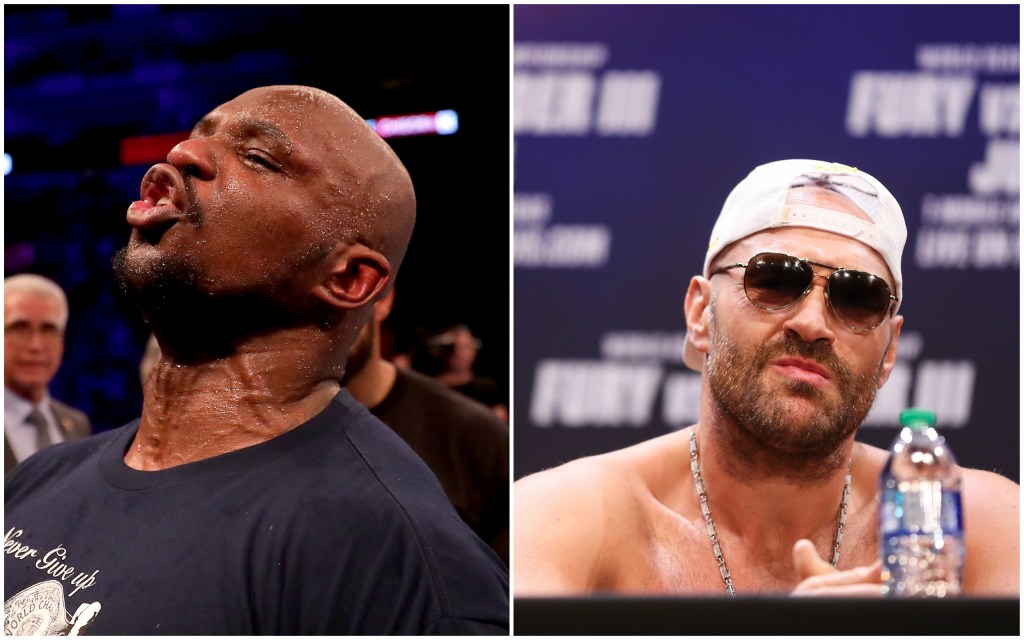 Dillian Whyte has branded Tyson Fury a ‘w****r’ in a furious attack on the WBC heavyweight champion, insisting he has ‘f****d the entire heavyweight boxing scene.’

Fury’s trilogy fight with Deontay Wilder was this week officially pushed back to October 9 after ‘The Gypsy King’ tested positive for Covid.

While it is not known when Fury first tested positive, the Morecambe fighter attracted criticism on social media when he was pictured visiting a car dealership in Las Vegas within a week of reports of an outbreak in his camp.

Whyte, who has endured a frustrating wait for a shot at the WBC belt, also condemned the champion’s actions – also casting doubt on whether there actually was a positive test in the Fury camp.

‘Tyson Fury is a w***er and a disgrace to British boxing if he has caught Covid-19 and gone around Las Vegas mixing with fans after cancelling the Deontay Wilder fight,’ Whyte told The Sun.

‘He talks s*** because when you have Covid-19 you are sick and you have to quarantine and instead he is walking around smiling, mixing and taking photos with people.

‘Either he has got it or he hasn’t – they said his mate and sparring partner Joseph Parker had it and the next minute he’s out at a UFC fight denying it.

‘There are videos and photos of him out and about, happy as Larry, just like he was when the Anthony Joshua fight got cancelled.

‘The biggest fight in British boxing history was cancelled and he was laughing and joking about it.

‘It is exactly the same now the Wilder fight has been cancelled because of him apparently having Covid.

‘Loads of boxers are using Covid as an excuse to pull-out of fights or as a back-up excuse if they lose.

‘These guys are irresponsible if they are using Covid when it is killing people and devastating families all over the world.’

Last week’s postponement was another blow for British boxing fans who have endured a frustrating summer. Fury’s unification showdown with Joshua looked to be finally set after months of negotiations only for Wilder’s successful arbitration case to enforce a trilogy fight and shelve plans for the all-British showdown.

With Metro columnist and British boxing legend Ricky Hatton among those now doubting whether Fury vs Joshua will ever happen, Whyte has laid the blame at the feet of ‘The Gypsy King’ and accused him of creating major problems for the rest of the division.

‘Tyson Fury has f****d the entire heavyweight boxing scene all around the world and the whole sport is struggling because of it.

Is it illegal to delete the NHS Covid Test and Trace app or disable contact tracing?

Beautician warns eyelash curlers could be damaging your lashes