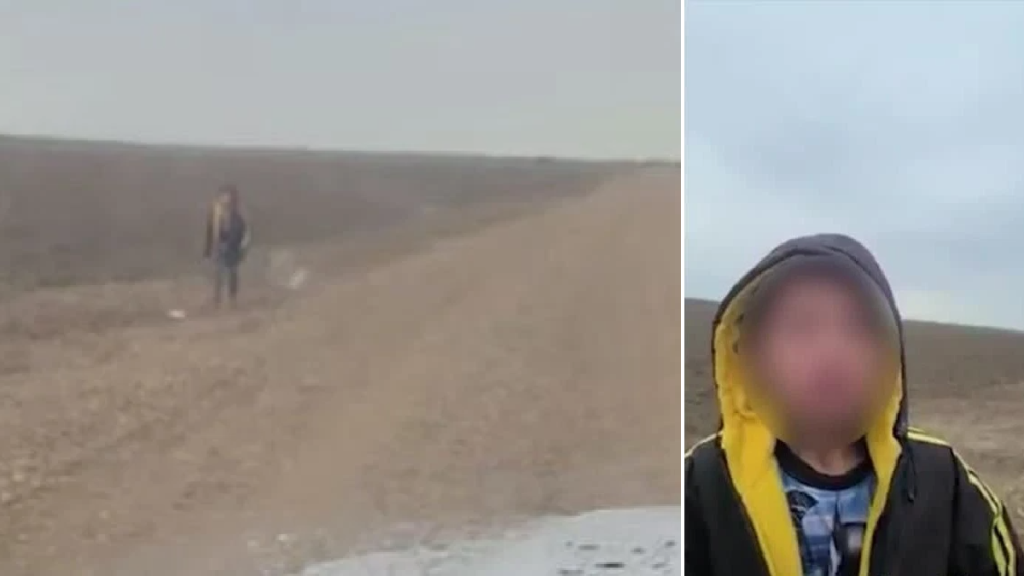 A 10-year-old boy near the US-Mexico border was left by a group and cried for help (Pictures: US Customs and Border Protection)

A 10-year-old migrant boy was found wandering alone near the US-Mexico border and crying for help after being abandoned the group he was with.

The unaccompanied minor’s fear and dire situation were captured in a video released by US Customs and Border Protection (CBP) on Wednesday. The unnamed boy is seen walking up to the person recording the clip and asking in Spanish, ‘Can you help me?’

‘What happened?’ the man recording responds in Spanish.

‘It’s that I was walking with a group and they left me behind’, the boy says, sounding as if he is about to cry. ‘I don’t know where they’re at’.

The man asks, ‘They left you alone?’

‘Of course they left me’, the boy replies.

The man continues to question the boy.

The boy says: ‘Nobody. I was with a group to turn myself in’.

It was unclear how and why the boy entered into the US, but CBP worked to put him into the care of the Department of Health and Human Services, according to WHDH.

Many migrant families are separating in Mexico and sending their children across the border into the US alone, according to CBP. Hundreds of such cases have emerged in South Texas.

In mid-March, leaked photos and videos showed hundreds of unaccompanied children in plastic tents at almost double their capacity at an overflow migrant CBP facility in Donna, Texas. Children lay and sat on sleeping pads and used aluminium blankets inside the tents at the border patrol processing center.

The Biden administration, which has faced scrutiny over a surge in border crossing attempts, has since opened a temporary facility adjacent to the overcrowded one. The new facility is designed to help speed up the process of releasing children from border patrol custody.