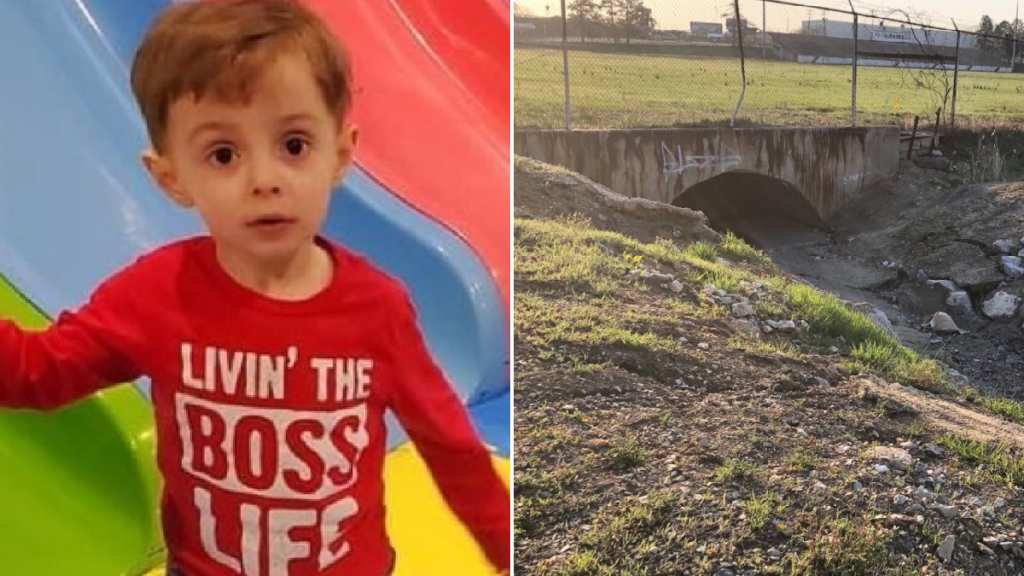 Kamdyn Torres, left, died after wandering away from his family’s new home and into a storm drain, right (Picture: GoFundMe/Local21News)

A two year-old boy is believed to have drowned after wandering away from his new home and falling into a storm drain. Kamdyn Torres vanished from his family’s home in York County, Pennsylvania, on Sunday evening shortly after they moved into the property.

He was reported missing 15 minutes later, sparking a frantic search. Tragically, the the toddler’s body was found 300 feet inside a storm drainage tunnel two hours later. Rescuers tried to revive him with CPR, but were unable to do so.

Kamdyn, who would have turned three on Friday, was taken to a nearby hospital, where he was pronounced dead. Police described Kamdyn’s death an ‘accidental drowning,’ although York County Coroner Pam Gay told the York Daily Record that cause of death is pending additional investigation.’

A GoFundMe page set up to raise money for Kamdyn’s family said: ‘On Sunday, April 4, 2021 what should have been a joyous Easter Holiday turned into a parent’s worst nightmare when in a split second Kamdyn Torres, their 2 year old son slipped away to explore his new surroundings, which included a storm water tunnel behind their new house.

‘The house was recently purchased and they were in the process of fixing it up and child proofing it. Kamdyn was found in water, unresponsive 300 feet inside the tunnel.  As expected the family is devastated by this unfathomable loss.

‘He will be dearly missed by his mother, father and two brothers, as well as extended family and friends.’

Get in touch with our news team by emailing us at webnews@metro.co.uk

For more stories like this, check our news page