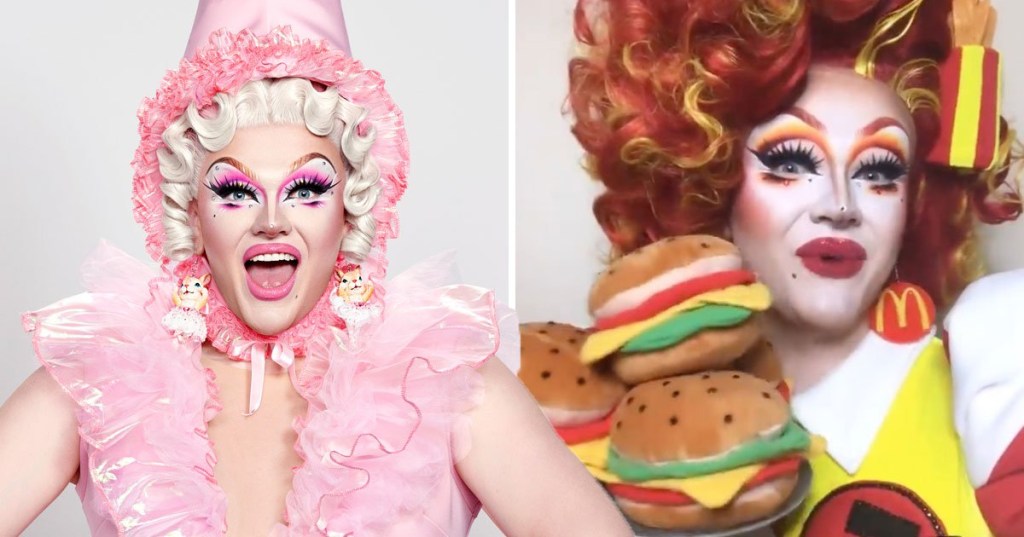 Ellie praised her McDonald’s job for keeping her going during lockdown (Picture: BBC/Instagram)

Drag Race UK series 2 star Ellie Diamond has revealed she is keeping it humble ahead of her TV debut and still running shifts at McDonalds.

The Dundee queen is about to dazzle us with her make-up looks as part of the new line-up taking to the stage for the first time this Thursday.

But she’s not forgetting her roots at good ol’ Maccas, and ahead of the show’s launch, appeared at a Zoom press event dressed up like Ronald McDonald in honour of the job that’s kept her afloat over the past year.

Speaking about literally not giving up the day job just yet, Ellie, real name Elliot Glen, said: ‘I do work [at McDonald’s]. They have been lovely to me these past couple of months.

‘With lockdown and quarantine, I’ve been fortunate to be able to have a job still going.’

Ellie has been branded the ‘baby queen’ as one of the youngest stars in this year’s series – but she reminded viewers not to let that be taken for granted.

It takes a special kind of queen to serve burgers and looks in one go! (Picture: Instagram)

‘I’m self-made. In Scotland, I don’t really have that much money to put towards drags to make amazing costumes and looks, but I’m still able to do that,’ she said, proudly revealing most of her outfits are sewn and made herself.

Drag Race UK will look slightly different this year thanks to coronavirus – with only four of the 10 episodes being filmed before the lockdown took effect for the first time.

Ellie and the 11 other contestants will be fighting it out for UK’s second ever drag superstar – joining Liverpool’s The Vivienne in the Drag Race Hall Of Fame.

We’ve already seen the first episode and, we can promise you, it’s not one to miss – starting with a two-look fashion runway and a Wimbledon-themed challenge with more ball gags than you can shake a racquet at.

CIA declassifies treasure trove of UFO documents for anyone to download