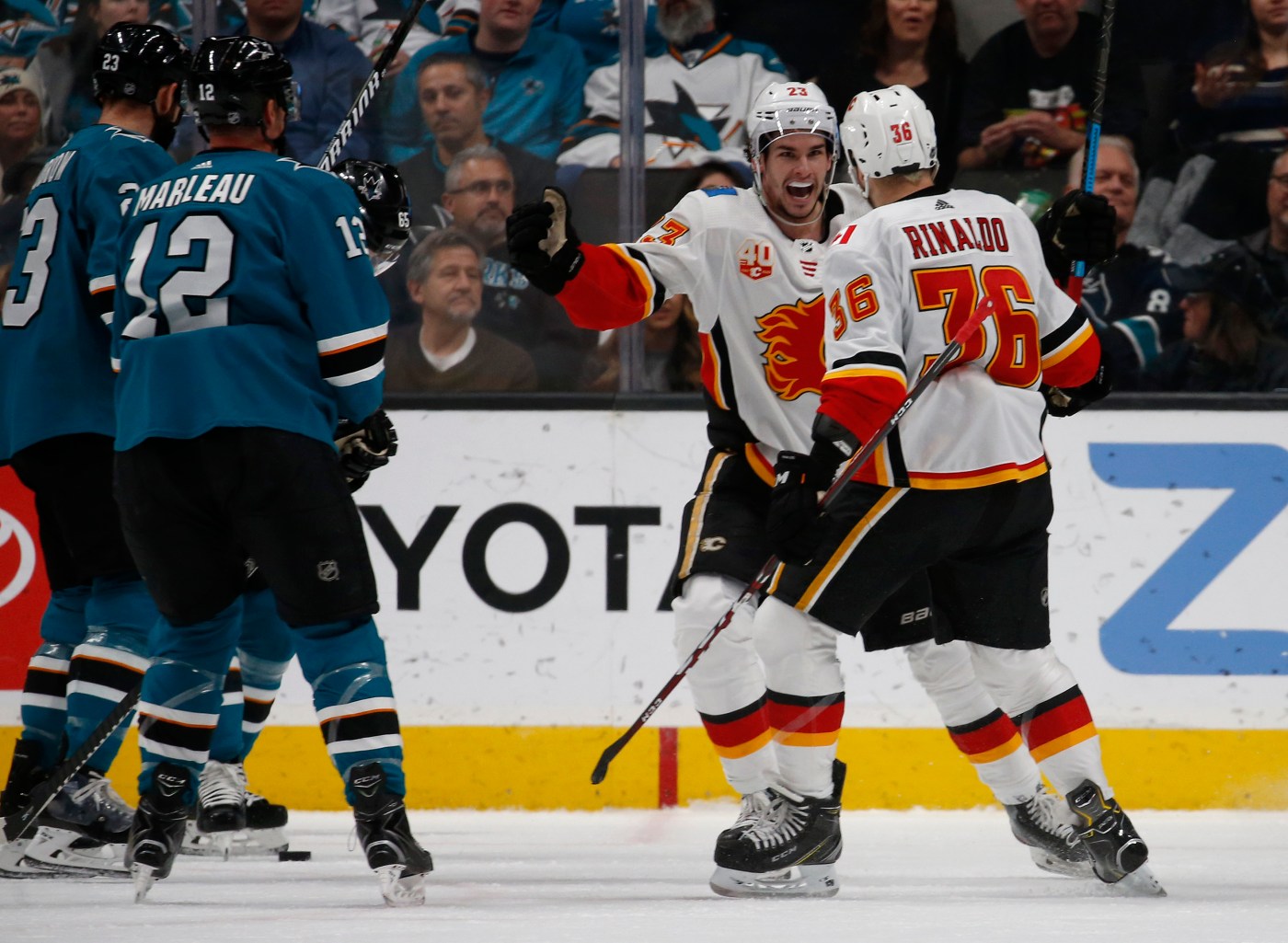 SAN JOSE — This time, the San Jose Sharks could not overcome a sloppy start against a Pacific Division rival from the province of Alberta.

The Sharks fell behind by three goals in the first 10 minutes and never recovered in a 6-2 loss to the Calgary Flames at SAP Center.

Goalie Aaron Dell didn’t get much help from the skaters around him as the Flames scored three power play goals, including one by Milan Lucic just 4:05 into the first period.

Flames forwards Tobias Rieder and Zac Rinaldo also scored early in the first period as the Flames took a 3-0 lead and never looked back.

Erik Karlsson scored off an assist from Barclay Goodrow at the 12:47 mark of the first period to cut the Flames’ lead to 3-1. That seemed to energize the sleepwalking Sharks, who were able to cut the deficit to one on Brent Burns’ power play goal at the 4:51 mark of the second period.

But on a Flames rush at the 10:48 mark of the second, Lucic’s pass to the front of the Sharks’ net bounced off Timo Meier before it went off Mark Jankowski and past Dell for a 4-2 Calgary lead.

Matthew Tkachuk, who had just drawn a tripping penalty assessed to Brenden Dillon, then put the game out of reach with a highlight-reel goal at the 1:26 mark of the third period.

Tkachuk took a pass Noah Hanifin and found himself wide open to the side of the Sharks net before he flipped the puck past Dell with his stick between his legs for his 19th goal of the season. Mikael Backlund added another goal at the 14:08 mark of the third to round out the scoring.

Dell faced 29 shots in the first two periods, nearly the same kind of barrage he faced last week when the Sharks traveled through Calgary and Edmonton.

Last Tuesday against Calgary, Dell made 16 saves in the first period to keep thegame scoreless and allow his teammates to find their legs in what became a 3-1 Sharks win.

Against Edmonton two nights later, the Oilers scored twice in the opening six minutes of the first period before the Sharks rallied for a 6-3 win.

Another look at the Tkachuk goal. #SJSharks | #Flames | #CGYvsSJS pic.twitter.com/Oyy9S8lWM4

Not so on Monday, as the Sharks (24-28-4) lost their third straight game on home ice. Goalie David Rittich made 21 saves in the first two periods, as the Flames beat the Sharks for the first time this season.

Kurtenbach: The Warriors are out to save all the busts, and it’s brilliant business