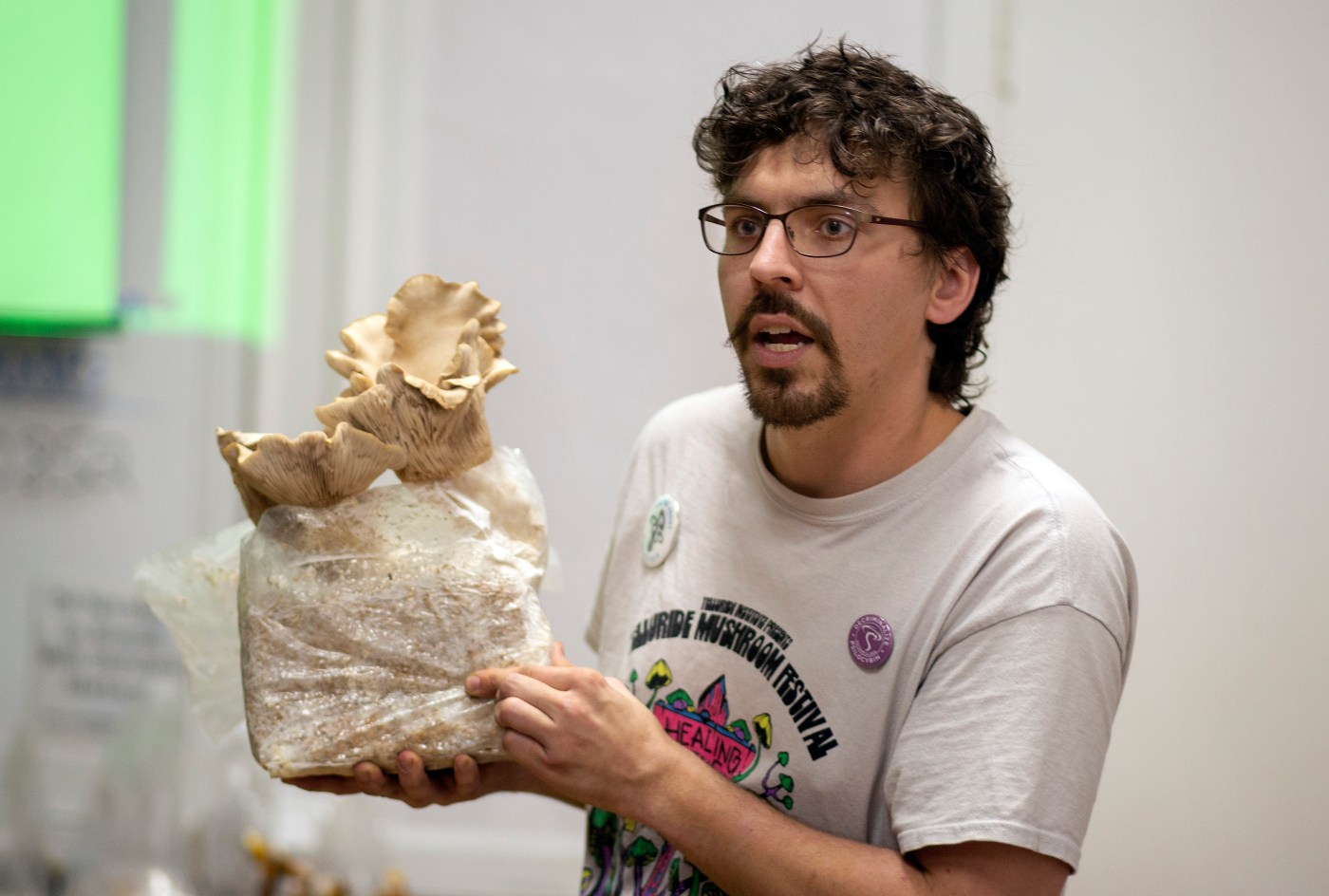 SANTA CRUZ — At first glance, it looked like an ordinary gardening workshop. On a table at the front of the room sat soil additives, humidity detectors and an oyster mushroom the size of a grapefruit.

“This is a younger shiitake mycelium,” said instructor Will Goss, passing around a bag of wood chips covered in thin white filaments. He then described how to grow the rootlike mycelium from spores and coax it into producing mushrooms. All of the people who attended the workshop were provided with their own grow kits, but they were told they needed to find their own spores.

That’s because they weren’t learning how to grow shiitakes. They were finding out how to cultivate psychedelic mushrooms — illegal to possess under state and federal laws.

The workshop at Santa Cruz’s Louden Nelson Community Center was sponsored by Decriminalize California, a statewide group of activists like Goss who are not only seeking to raise awareness about the use of psychedelic mushrooms but also to persuade California voters to support a November ballot measure that would legalize the hallucinogenic fungi.

Goss, a longtime fungi enthusiast, believes education is the best way to influence public perceptions of the drug and inform people of its potential benefits.

“This is potent medicine we’re talking about,” he said.

Denver last year became the first U.S. city to decriminalize the possession and use of psychedelic mushrooms. Oakland quickly followed, expanding its resolution to include all hallucinogenic plants, including ayahuasca and peyote. And similar campaigns have popped up in dozens of cities across the country — including Santa Cruz, where the City Council in late January voted unanimously to pass a resolution calling on police to not spend city funds to pursue drug charges for the use or possession of all psychedelic fungi and plants.

But Goss’ group is aiming much higher. Its initiative would not only legalize the possession and use of hallucinogenic mushrooms, but also allow commercial sales and distribution of the drug across the Golden State.

For its measure to appear on November’s ballot, the group will need to gather at least 623,212 signatures of registered voters by June 6.

If the measure qualifies for the ballot, it is expected to be fiercely opposed by law enforcement groups, parent organizations and many of the same groups that fought Proposition 64, the 2016 initiative that legalized the possession and sale of recreational marijuana.

Used for thousands of years by indigenous groups in North and Central America, psychedelic mushrooms were popularized in the United States in the late 1950s and early 1960s, when they were commonly called “magic mushrooms” and “shrooms.” But they were banned in 1970 when psilocybin and psilocin, the two main psychoactive compounds, were listed as Schedule 1 drugs under the U.S. Controlled Substances Act.