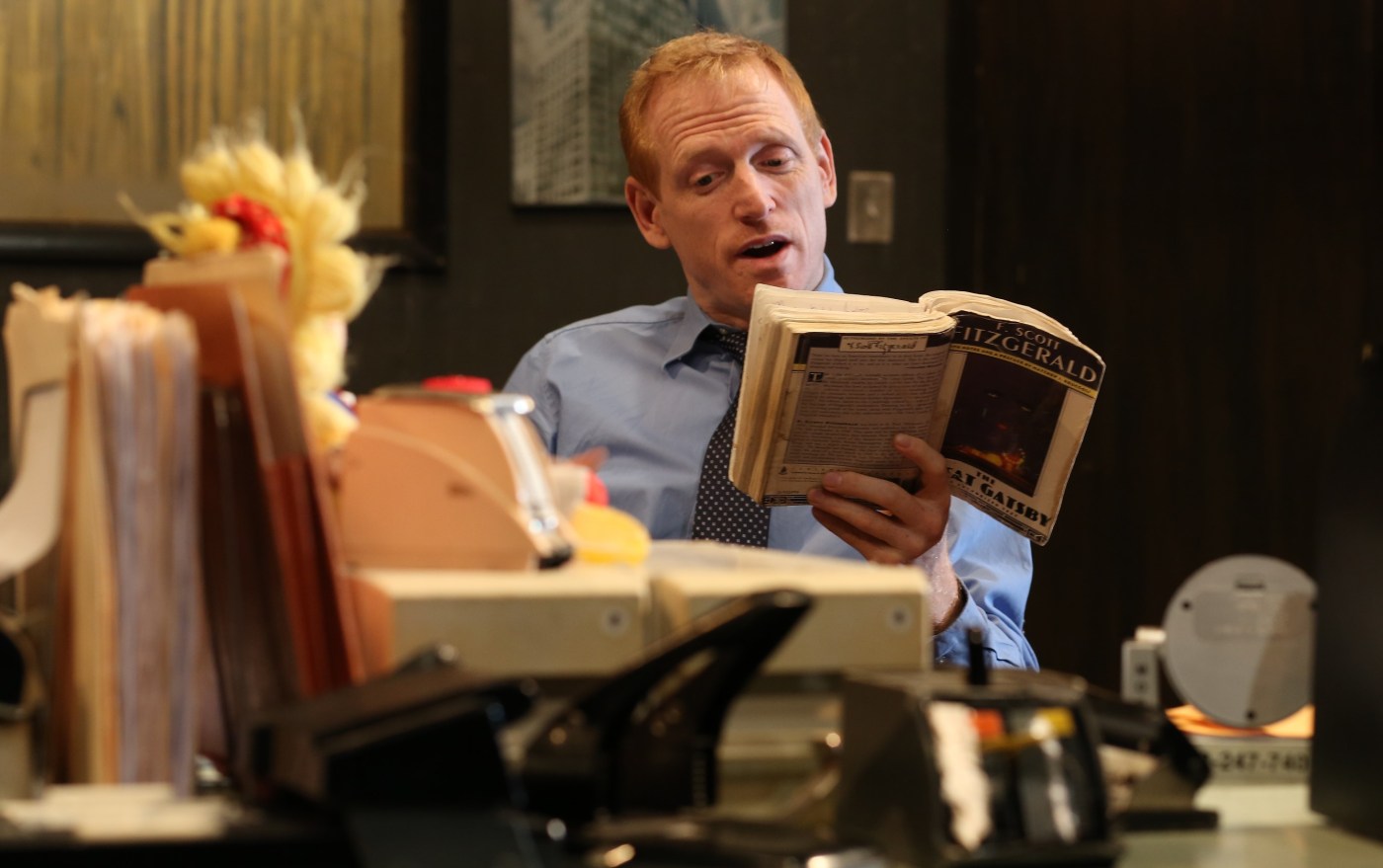 Arriving to work to find his computer hopelessly frozen, a man in a comically drab and depressing office finds a paperback copy of F. Scott Fitzgerald’s 1925 novel “The Great Gatsby” on his desk and starts reading it aloud to himself.

This is the humble beginning of “Gatz,” the internationally acclaimed epic theater sensation by New York’s Elevator Repair Service, in which the spoken portion is the entire text of “The Great Gatsby.” (The title of the show comes from Jay Gatsby’s birth surname.)

Now playing a relatively short run at Berkeley Repertory Theatre, it’s an 8½-hour experience broken up by two intermissions and a two-hour dinner break. The first half is about 3½ hours, and the second half is 3 hours and 10 minutes.

At first the office worker is reading “Gatsby” just to pass the time, somewhat mechanically, but he becomes more and more enthralled with it. For a long time his coworkers go about their business, ignoring or occasionally interrupting him with slight annoyance. Gradually, though, they start to roughly mirror characters and moments described in the narrative. About a half hour in, one coworker suddenly starts speaking some of the dialogue, and soon everybody’s in character acting out the scenes.

Scott Shepherd makes a wonderfully engaging narrator and point-of-view character, displaying comic befuddlement at the excesses of the people he hangs out with and shifting skillfully into other characters. Jim Fletcher exudes melancholic intensity as Jay Gatsby, his mysterious, self-mythologizing and much-gossiped-about neighbor of the grand mansion and wild parties next door.

Fletcher also seems to be the narrator’s boss or manager of some kind; whatever they actually do in this office is left purposely vague, down to the generic labels on file boxes: payroll, invoices, HR.

Louisa Thompson’s set for the office is superb. Everything is scuffed and stained and cluttered with such archaic and weathered equipment that the scene could be set pretty much anytime in the last few decades, though some of the many file boxes on the high shelves display recent years. The drab office attire of Colleen Werthmann’s costume design fits right in, brightening somewhat as the story takes flight.

Sound designer Ben Jalosa Williams sits at a desk in a corner of the office, silently staring at his laptop and not interacting with anyone. As the story goes on, he starts popping through every now and again to portray minor characters, such as a man selling dogs.

Williams’ sound design goes a great way toward evoking the world of the story, from traffic and train sounds to lively period jazz, and Mark Barton’s lighting design shifts strikingly from the harsh office glare to the moody, shadowy tones of late-night encounters.

Elevator Repair Service founder and artistic director John Collins gives the story a beautifully nuanced staging, taking plenty of time for uncomfortable or poignant silences along the way, and the cast of 13 drifts deftly through a variety of roles.

Annie McNamara is a stoically unhappy Daisy, Gatsby’s long-lost love, brightening up only when he’s around. Her husband, Tom, is …read more

Horoscopes Feb. 8, 2020: Mary Steenburgen, share your plans with someone you love.