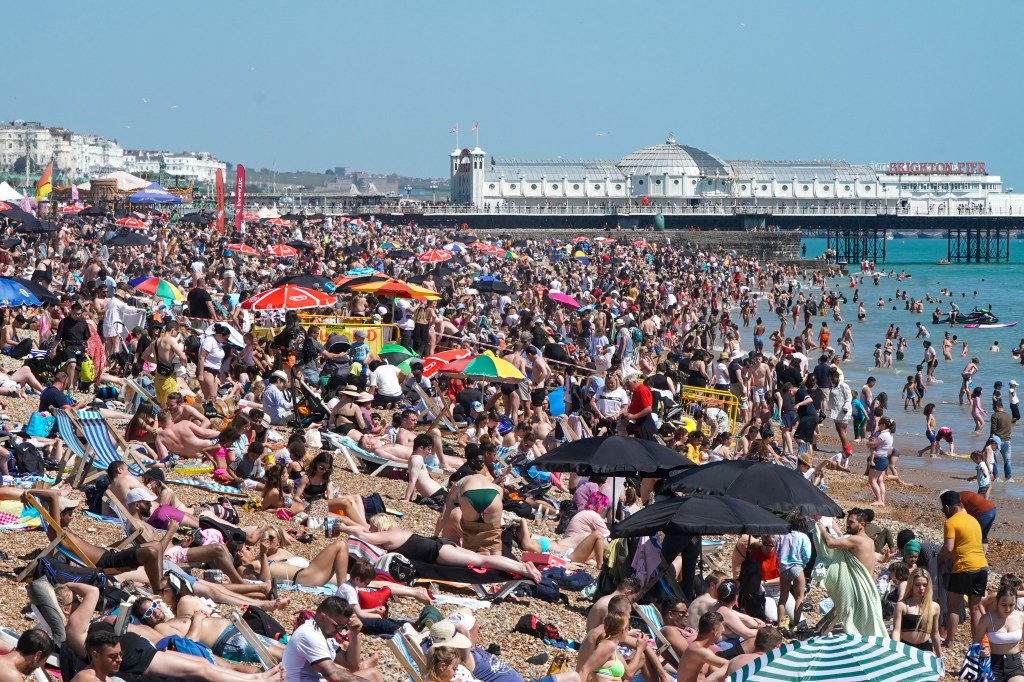 Brits have been flocking to beaches to enjoy the current heatwave (Picture: Chris Eades/Getty Images)

It’s hot and humid – and the good news for most of us is that we’ve not seen the last of the warm weather either.

Thousands of Brits have been heading to the beaches and parks to catch some sun with the warm weather bringing joy to many.

While many holidaymakers are now jetting off abroad, the constant changing of quarantine rules on destinations coupled with the warm weather in the UK, could see people choose to stay at home.

On Tuesday, July 20, the UK recorded its hottest day of the year so far with temperatures reaching 32.2°C in Heathrow, west London.

But with thunderstorms predicted soon here’s all you need to know about the current heatwave.

What’s the cause of the current heatwave?

The warm weather has been brought on by the Azores high, a high-pressure system which has moved in from the Mediterranean and North Africa on the Atlantic Ocean.

The Met Office has explained an extension of the system is the cause behind the current hot weather.

Speaking ahead of last weekend’s high temperatures, Met Office operational meteorologist Andy Page said: ‘The extension of the Azores high is the principal reason behind the UK’s current weather pattern, which will see much of the UK reach heatwave thresholds over the weekend and into early next week.’

When will the current heatwave end?

While blue skies and warm temperatures remaining present for much of the UK on Thursday, July 22, come the weekend thunderstorms are expected.

The Met Office issued amber and yellow thunderstorms warnings for much of central and southern England, alongside its first-ever extreme heat warning, which covers the South West, southern parts of England, the West Midlands and Wales until midnight on Thursday.

A yellow warning for rain has also been issued and covers central and southern parts of England and Wales and will be in force from early on Saturday to midnight on Sunday.

The capital has been basking in warm weather in recent days (Picture: Getty)When is the next UK heatwave in 2021?

The good news is we might not have long to wait until the next heatwave arrives in the UK.

Here’s what the Met Office is predicting between August 2-16: ‘Into early August, warmer and drier-than-average conditions look likely to return for much of the UK, although there is an increased risk of thunderstorms, especially in the southeast.

‘By mid-August confidence becomes rather low, but with changeable conditions most likely.

‘Above-average temperatures continue to be signalled for much of the period, perhaps becoming very warm or hot at times in …read more

We’re building back better: How the Government’s Plan for Jobs is helping people develop the skills they need for a brighter future