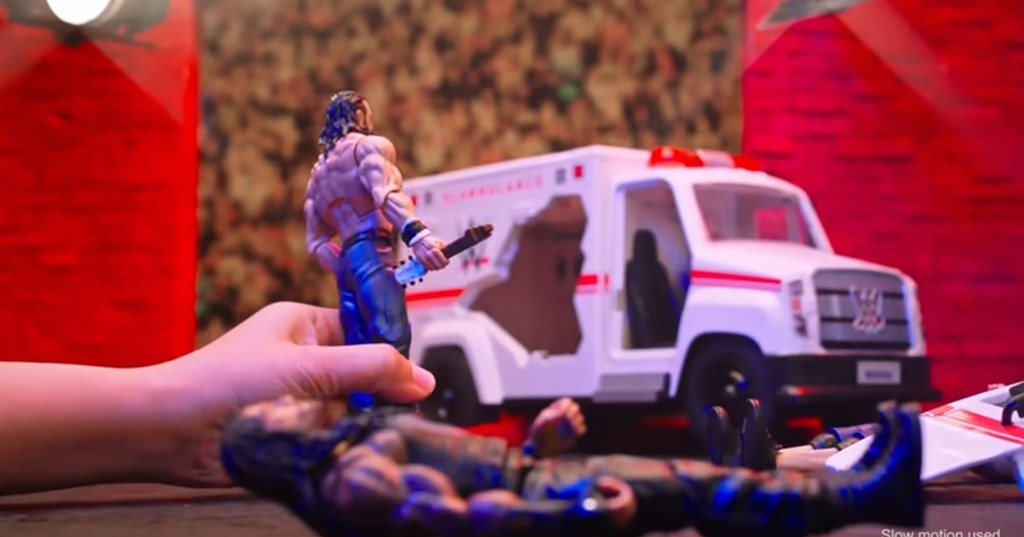 An outraged mum has slammed toy manufacturers for selling a figurine set she claims carries a ‘message of violence’ towards NHS workers.

The WWE toy set includes wrestling characters and a toy ambulance, with kids encouraged to stage fight scenes in which the vehicle is torn apart.

Figurines are seen booting through the ambulance’s side panel, ripping lights, windows and doors off the vehicle and attacking each other with them.

After seeing the ad, Sabrina Fitzsimmons, 41, accused Smyths Toys of telling children it is ‘acceptable’ to be violent towards emergency service workers.

Writing on the company’s Facebook page, she said: ‘Can I ask what the logic is in advertising a toy which encourages the destruction of an ambulance?

‘At a time during a pandemic when there are active campaigns to reduce violence towards essential workers?

‘And considering what the NHS has done for us over the past year I find the toy and the advert for it offensive and inappropriate.’

The figurine set and the advert do not feature any emergency service workers or NHS branding.

Smyths Toys responded: ‘Hi there! Thanks for [sic] in touch. Apologies for any disappointment caused by this.

‘I can see from our system that you have been in touch with an agent regarding this issue. Apologies again for any upset or disappointment caused. Best wishes!’

The 41-year-old, from Bournemouth, said the company ‘completely missed the message’.

She added: ‘This toy is massively inappropriate. I wouldn’t purchase that for my child and I certainly wouldn’t get behind advertising it, I just think you’re crossing a line of ethics and morals.

‘I wasn’t trying to be a ‘Karen’ but I just found it really offensive given the pressure I know the services have been under and the sacrifices that they’ve made.

‘Toys are supposed to teach our children, not only be fun. These people in the health care sector saved our lives.

‘To advocate for a toy that perpetuates the message of violence towards the vehicles and the people that help us, I just think – what kind of message are you sending to children here? How is that okay?’

WWE said the toy is made by Mattel and sold by Smyths. Smyths and Mattel have been contacted for comment.

Stock Market: Suez Canal Update! Floating!
More celebrity men are embracing gender nonconforming fashion, but is this more than a passing trend for the privileged?

How do you vote on Love Island?

Man shot while driving in Bronzeville

3 questions the Cubs need to answer before the trade deadline