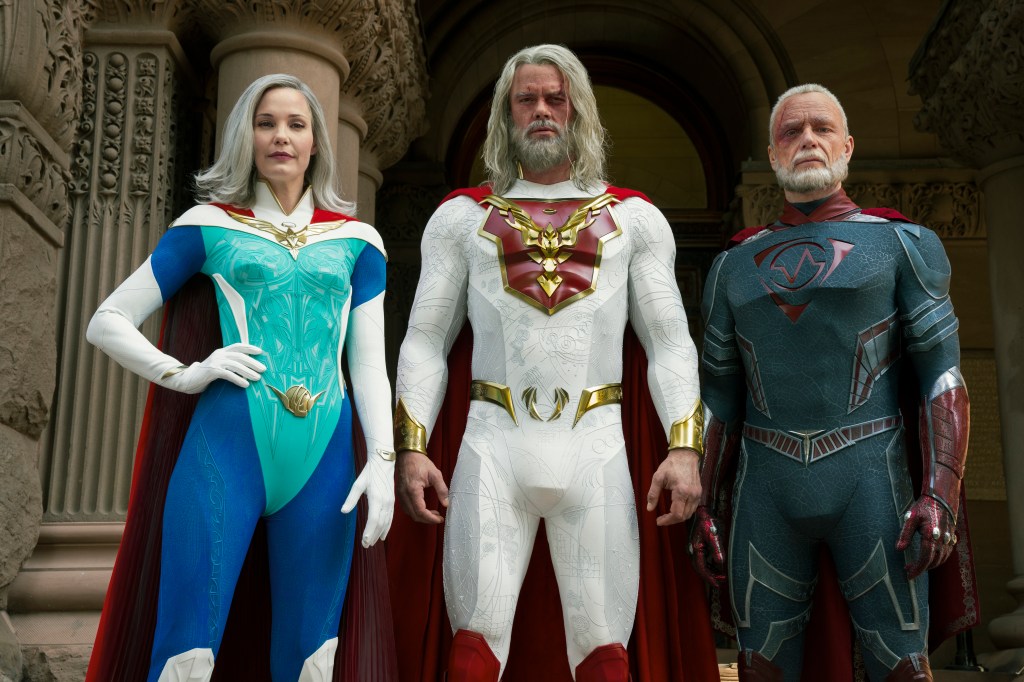 The superheroes have a legacy to uphold in the Netflix series (Picture: Steve Wilkie/Netflix)

New Netflix superhero series Jupiter’s Legacy blasts onto the scene in spectacular fashion, shining a brutal spotlight on just how violent saving the world would really be – blood, guts and all.

There’s undeniably no shortage of superhero stories out there at the moment, with caped crusaders, web-slingers and vigilantes reigning supreme across TV and cinema. But while some would say that there are too many, others would argue that as long as the content is of a high quality, then the more the better.

For those who are all for expanding the land of superheroes far and wide, Jupiter’s Legacy definitely won’t disappoint.

Despite its array of tight costume-clad characters, this show feels like anything but a traditional hero-saves-the-day kind of tale. It subverts norms of the genre and doesn’t shy away from putting the ugly side of superhero work on full display, all the while raising some big life questions that will leave viewers examining their own moral integrity.

Based on the comic book series of the same name by Mark Millar, the narrative follows a group of superheroes who gained their powers in the 1930s. 90 years later, the aged (but still active) heroic bunch are raising a new generation to protect the world… but these up-and-coming superheroes may choose to eschew the old, strait-laced ways of their seniors.

Viewers are transported back to the past to see where it all began (Picture: Steve Wilkie/Netflix)

But things aren’t all hunky-dory just because they now have the ability to move mountains. Over the years people fall out, relationships become fragmented and big egos go head-to-head in moments that see the series flit from superhero blockbuster to family drama.

If anyone knows how best to depict squabbling superheroes, it’s Mark, with the Scottish comic book writer imbuing Jupiter’s Legacy with his signature gritty style.

Brandon Sampson (Andrew Horton) strives to live up to his parents (Picture: Courtesy of Netflix)

The Netflix show places just as much emphasis on the characters’ psyches as it does on their powers, which serves as a powerful reminder of their humanity. The inner demons that they’re fighting are as equally as important as their real-life foes, and this turmoil feeds into the dysfunctional family dynamic of the Sheldon clan.

Mark’s original story is brought to life by the captivating performances from the cast, who each …read more

When can you bathe a newborn baby and how often should you do it?