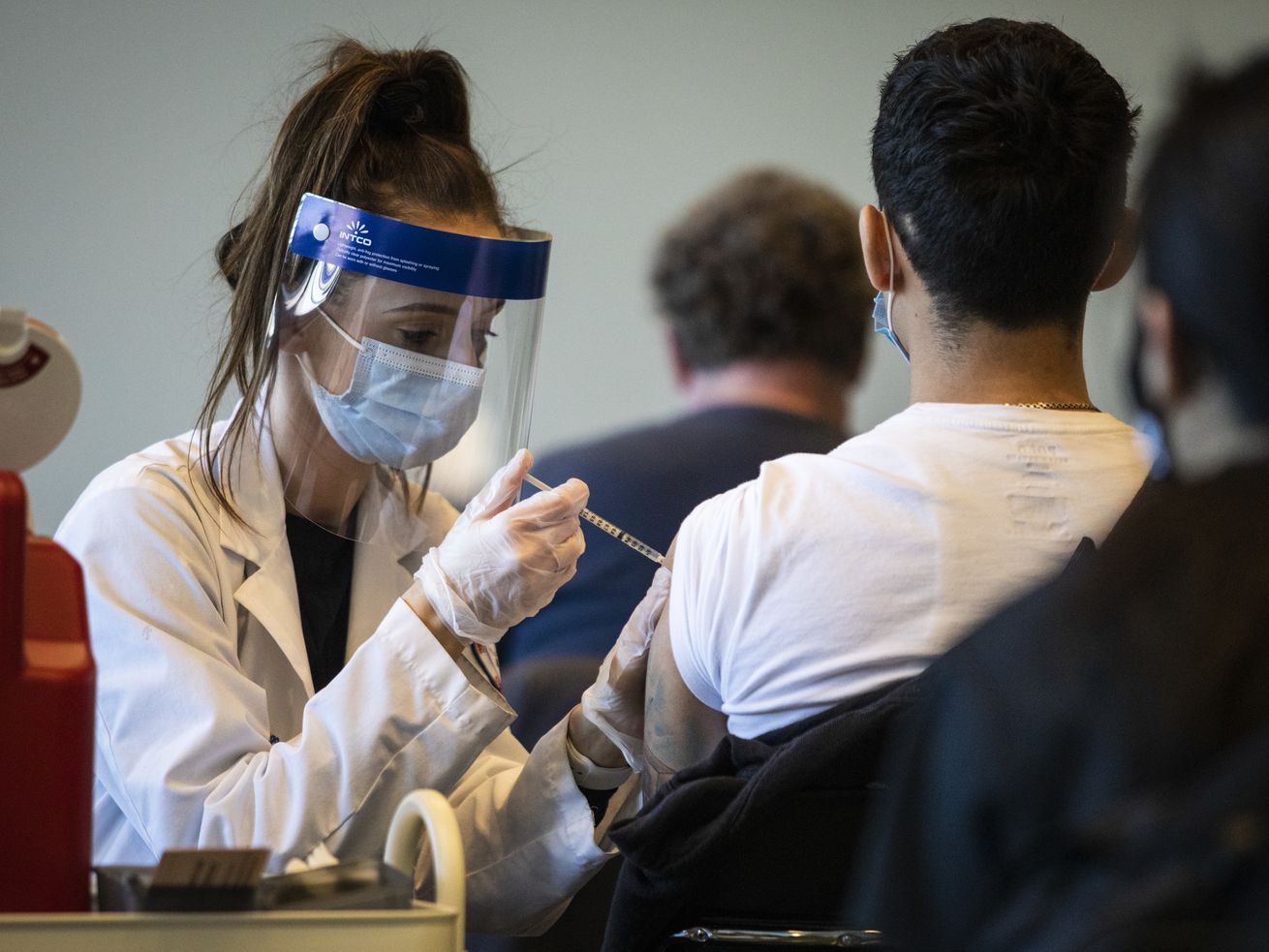 Here’s the latest news on how COVID-19 is impacting Chicago and Illinois. Follow here for live updates.

Latest
Surging COVID-19 cases, rising positivity mean it’s ‘time to double down’ on face masks and other precautions
Ashlee Rezin Garcia/Sun-Times
Hundreds of union members deemed essential get doses of a COVID-19 vaccine at a mass vaccination site run by the Chicago Federation of Labor at International Union of Operating Engineers Local 399 on the South Side, Monday, March 29, 2021.

A steady, monthlong surge in COVID-19 infections and hospitalizations took its latest troubling step up in Illinois Tuesday as officials reported 2,931 new cases of the virus, and positivity rates soared to levels not seen in months.

The latest infections were diagnosed among 51,625 tests, meaning 5.7% of samples came back positive — the highest proportion of new cases reported by the Illinois Department of Public Health in a single day since Jan. 19.

The state appeared well on its way to snuffing out the pandemic less than a month ago, when most key metrics sank to pandemic lows and a historic vaccination campaign started gaining steam.

But since March 12, Illinois’ seven-day average statewide testing positivity rate has ballooned from 2.1% up to 3.9% — its highest point since Feb. 2. Chicago’s regional positivity rate is even higher, at 5.1%.

At the same time, hospitals statewide have seen a 52% uptick in COVID-19 admissions, with 1,648 beds occupied Monday night.

Nearly 600 Chicagoans are testing positive every day on average, a figure that has more than doubled since the start of March.

Cook County officials warned over the weekend that the region is already “at the beginning of a surge.” It marks the state’s third wave of the virus, following the initial wave that hit last spring and an even more devastating resurgence in November.

News
9:26 a.m. Pride, tears — and a little chocolate cake — round out catching-up time for Harris, Foxx and Stratton

When Cook County State’s Attorney Kim Foxx and Vice President Kamala Harris first saw each other during the vice president’s visit to Chicago on Tuesday, Foxx said they both had tears in their eyes.

“She’s someone I’ve known throughout my career,” Foxx said. “She’s laid a trail for me. To be in the motorcade and see her, as a friend, makes me immensely proud.”

Foxx and Lt. Gov. Juliana Stratton met up with the vice president at Brown Sugar Bakery on East 75th Street for a slice of German chocolate cake and a platter of cupcakes.

Harris had just visited a nearby COVID-19 vaccination site set up by the International Union of Operating Engineers Local 399. The center is run by the Chicago Federation of Labor, which has an ownership stake in the Chicago Sun-Times.

Foxx said Harris called her Monday, suggesting they catch up over a snack while the vice president was in town.

The two hadn’t spoken since congratulating each other on election night. Foxx had secured a second term, and Harris made …read more

How many horses have died at the Grand National?

How to get twice-weekly Covid tests and who is eligible for them?