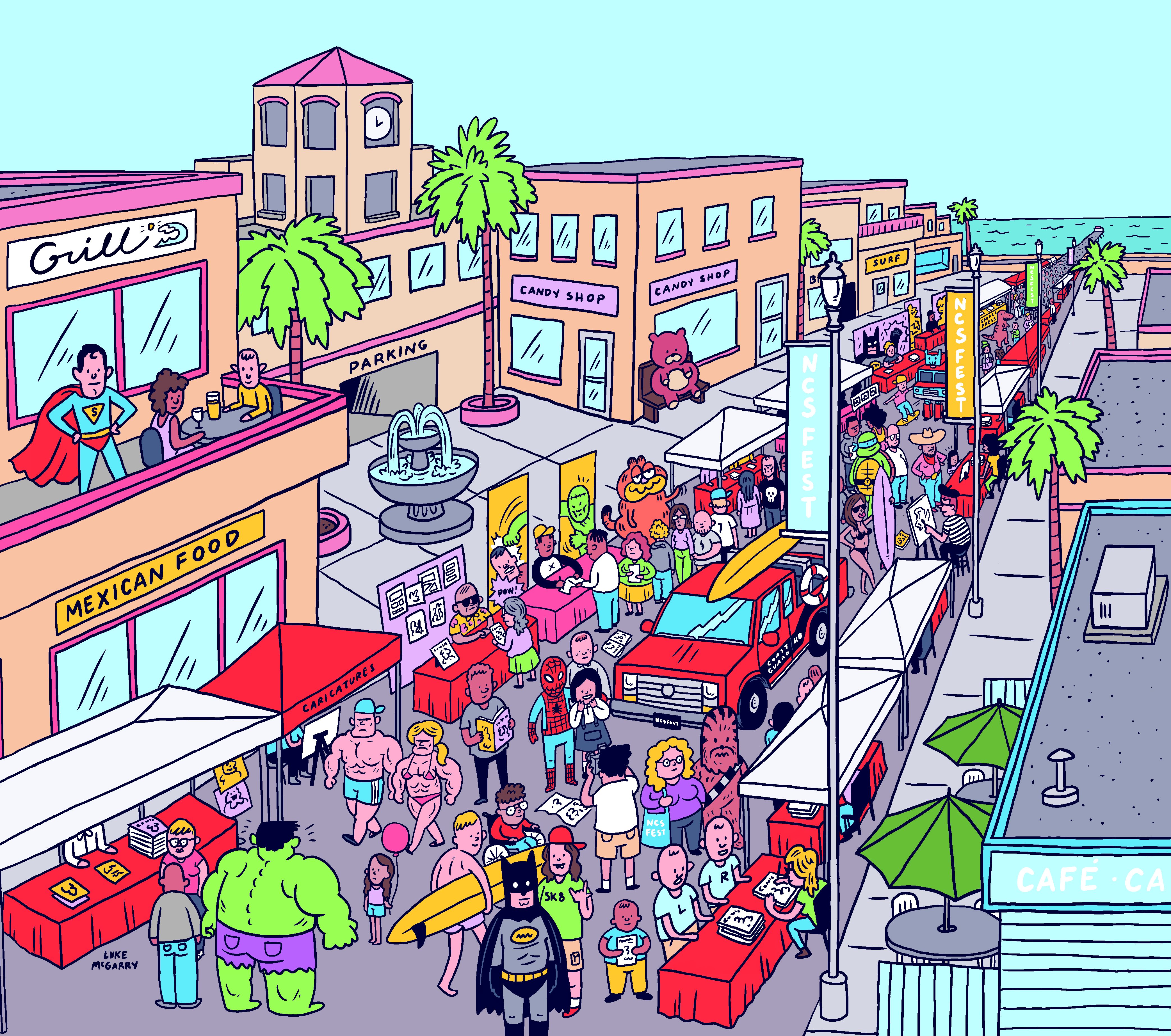 Let’s begin this week’s recap of the season finale of “The Real Housewives of Orange County” with a fitness tip — no, cautionary tale — from Shannon Storms Beador.

Here’s what you shouldn’t do if you are invited to a beach party and are feeling sensitive about your pandemic figure: Don’t put on your Spanx, then a second Spanx, and then have your stylist wrap your midsection tightly with wide, black electrical tape.

“Let’s be clear,” Shannon says in a camera confessional intercut with scenes of the mommy of three getting wrapped like a mummy. “I got a ‘Covid 16 (pounds)’ that I’ve been packing, and I need more than my three Spanx.”

The National Cartoonists Society Foundation, which will debut the inaugural NCS Fest in Huntington Beach this weekend. (Courtesy image by Luke McGarry)

The unanswered mystery of the night: Is she saying she’s wearing all three pairs of Spanx that she owns? One can only hope Bravo chatterbox Andy Cohen will provide the answer on the reunion show to follow.

Again, don’t try this at home.

In any event, Shannon pronounces her technique “very effective,” though daughter Adeline, one of the twin daughters who usually serve as a silent, eye-rolling Greek chorus, witnessing Shannon’s absurdities, isn’t sure this is a great idea.

“I’m just concerned, like, how can you breathe in that?” the teenager says, and that, ladies and gentlemen, is what we in the recapping game call foreshadowing.

Most of the action in the finale revolves around a beach party planned by housewife Emily Simpson.

Before we get there, though, we get quick, final looks at some of the storylines we’ve followed this season.

Shannon holds a family dinner to toast the imminent departure of eldest daughter Sophie for her freshman year at Baylor University. We assume the organic headboard and tailored bed skirt Shannon forced upon her made it into the car. No definitive word on whether the kid accepted ma’s Prada coat.

Elizabeth has her first-ever therapy session to start working through a divorce finalized during the season and a childhood spent in what she described as a religious cult.

Kelly Dodd looks lovey-dovey with fiance Rick Leventhal as they talk about having a small ceremony to get married, and a big party once it’s pandemic-safe for a large shindig.

Braunwyn Windham-Burke, who has been working through issues involving her drinking and her marriage all season, focused again on the latter this week, admitting that her BFF Shari moved in with Braunwyn’s family and she hasn’t felt the same about husband Sean since.

“Being around Shari makes me realize that Sean and I have to have some very big conversations,” Braunwyn says in a camera confessional while trying on her sexy new beach outfit with Shari in preparation for the beach bash. “There are some” — insert long pause here — “things that I’m feeling that I need to talk to him about.”

Marin brothers’ song speaks to how pandemic is affecting youths

It’s your last chance to earn up to 125,000 points with Marriott Bonvoy Amex cards — and you’ll also get Platinum elite status for a year