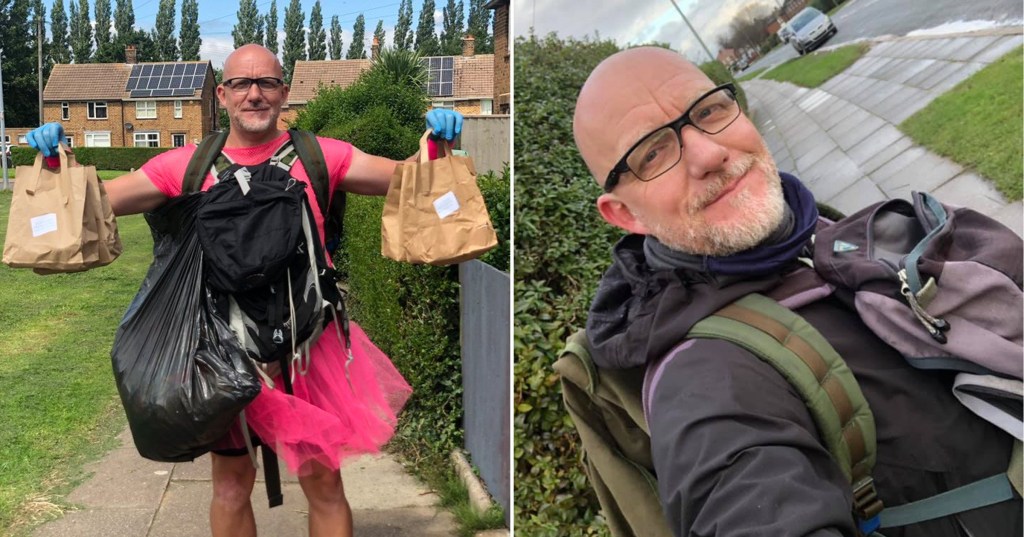 A teacher given an MBE for delivering 7,500 meals to vulnerable children during lockdown has decided to revisit his mission.

Zane Powles, 48, is attempting to improve food parcels for kids after being ‘horrified’ at the ‘rubbish’ supplied in recent days.

He delivered 138 packed lunches a day when schools were forced shut last year – and now he is giving his pupils meals and laptops once more.

The Government come under fire for the ‘woefully inadequate’ packages Chartwells sent to parents and ministers have now U-turned by returning to a system where parents are given £15 meal vouchers instead.

So the assistant headteacher from Western Primary School in Grimsby has been walking around Lincolnshire with two big rucksacks and a black bin bag full of packed lunches.

The meals each have an extra yogurt, a packet of raisins and bag of crisps that Mr Powles bought from Tesco himself.

‘The original packed lunch they provide is rubbish in my opinion,’ he told the Mirror, ‘I would be horrified if my kids were getting that!

‘I can’t believe a company is profiting from our vulnerable children.’

The dad-of-three also takes donated laptops to families who are struggling to home school their children on broken and outdated devices.

One mum burst into tears when she received a laptop, saying she had been worried her kids were ‘going to get left behind’.

Joanna Kesson, 36, said: ‘My partner is on a zero-hour contract and including my stepson. I have six to provide for. It’s a bit overwhelming.’

After Ms Kesson explained she still had no internet, Mr Powles promised he would return the next day with a dongle.

He said he has helped some families ‘trying to educate six children using one phone’ while some households have no internet access, and other parents cannot read or write.

When is the first Dancing On Ice elimination?

Mr Powles makes sure he is staying safe during deliveries by placing packages down, knocking on the door and then standing back.

Who is on the Covid vaccine high-priority list and when will they get the jab?

Six-year-old Lewis excitedly received a packed lunch and said: ‘I think everyone should be more like Mr Powles.

‘He’s 100% nice and really helpful. It’s been scary with everyone suffering from it (Covid) but it makes me happy to see Mr Powles. Most mornings I wait for him.

‘I like to thank him for saving the world and bringing our packed lunches and saving lives.’

One mum told the teacher her dyslexia was making it difficult to teach her children, and said: ‘I’m finding out I’m really, really not smart.’

‘This is not in law!’ Phillip Schofield slams police who fined two women £200 for going on a walk

Who is Moth on The Masked Dancer USA? All the clues you need to know

John David Washington brushes off Zendaya age gap criticism in Malcolm and Marie: ‘She is a woman’