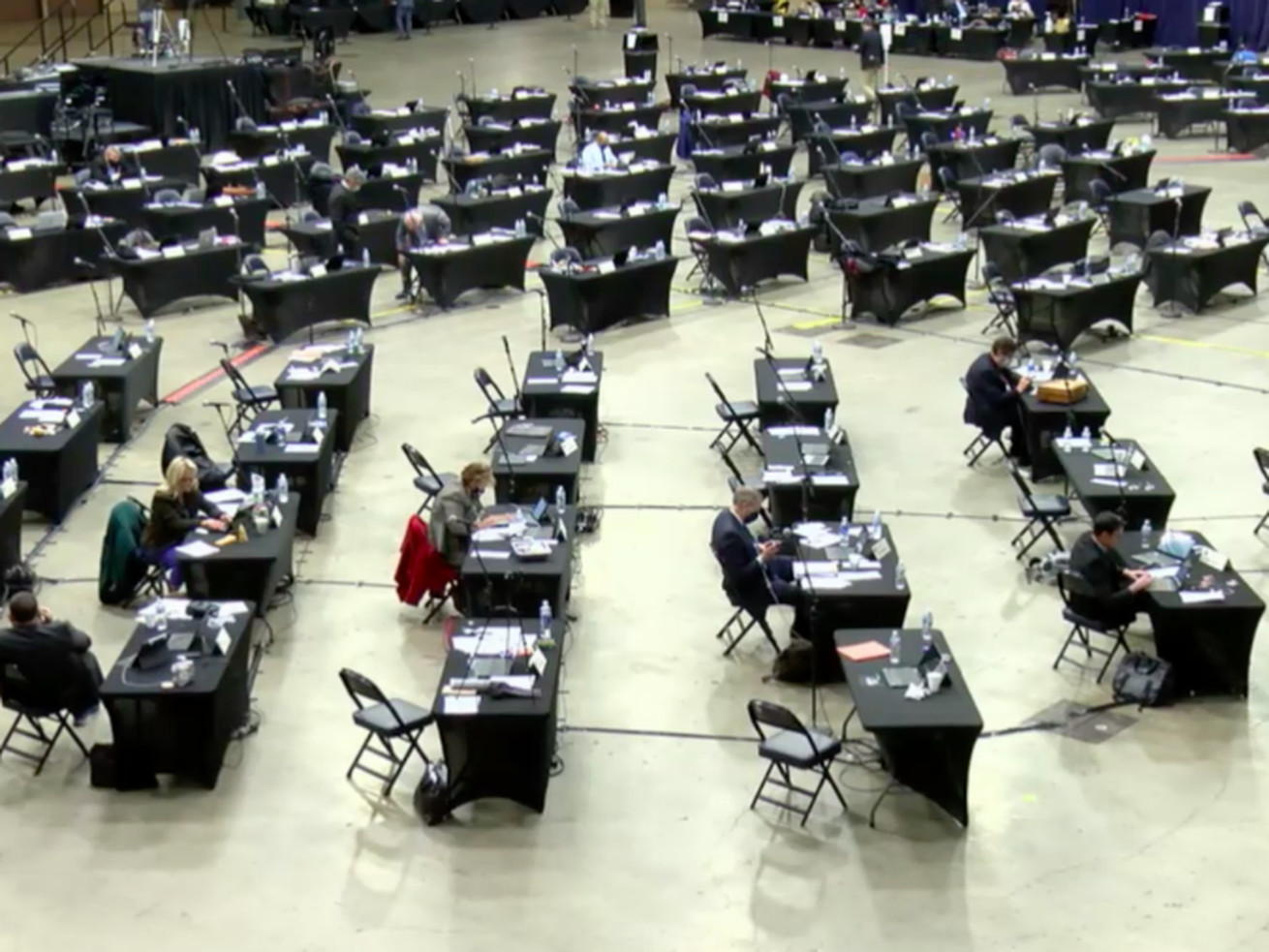 House lawmakers meet at the Bank of Springfield Center for their lame duck session. | BlueRoom Stream

The measures advanced Monday and Tuesday were part of the Black Caucus’ agenda.

Illinois legislators advanced pieces of the Black Caucus’ agenda — including a cap on payday loan rates and a permanent extension of vote-by-mail introduced last Spring — during a busy series of meetings held before new members are sworn in Wednesday.

After a long debate late Monday night — and a caucus break — the House passed a piece of the Black Caucus agenda focused on economic access, equity and opportunity. The legislation, SB1608, focuses on increasing diversity in the state’s procurement process and passed through the chamber 70 to 39 with one voting present and eight not voting.

Republicans pushed back on the legislation, expressing concerns that the implementation of the bill would turn the state’s contracting process into a “disaster,” as Rep. Deanne Mazzochi, R-Elmhurst, put it.

Rep. Sonya Harper, D-Chicago, spoke on behalf of that bill — as well as others associated with the economic access piece of the Black Caucus’ agenda — on the floor of the Bank of Springfield Center Monday night and Tuesday.

Though the measure passed the House, and could come before the Senate late Tuesday, Harper said the bill might be changed during the 102nd General Assembly, which is sworn in Wednesday, since the measures in the bill don’t go into effect until Jan. 1, 2022.

During the Tuesday session, Harper presented three more bills and amendments that are associated with the economic access pillar. That includes two amendments to SB1480, which aims to end wage disparities for black women, men and people with criminal records; two amendments to SB1980, which focuses on increasing housing access to those with criminal records; and three amendments to SB1792, which focuses on equity in the cannabis industry and has an anti-predatory lending measure that caps the allowable annual percentage rate for payday loans, small consumer loans and title-secured loans at 36%.

A permanent extension of mail voting expansions adopted last spring due to the pandemic passed the House’s Executive Committee Tuesday.

Rep. Katie Stuart, D-Edwardsville, the sponsor of the bill, said she and other members of the House Women’s Caucus felt that some of the measures put in place in May, “that were only designed for the November 2020 election, worked very well and were very popular and so this bill will just allow some of those provisions to continue.”

The bill allows local election officials to set up ballot drop boxes for vote-by-mail ballots and curbside voting “if the election authorities so choose,” according to the language of the bill.

It would not, however, send a vote-by-mail application to voters who have participated in recent elections — a departure from a measure approved for last year’s election.

“This will be permanent because our election authorities who chose to use it found it was successful,” Stuart said.

Republican members of the committee had concerns about the security of these measures.