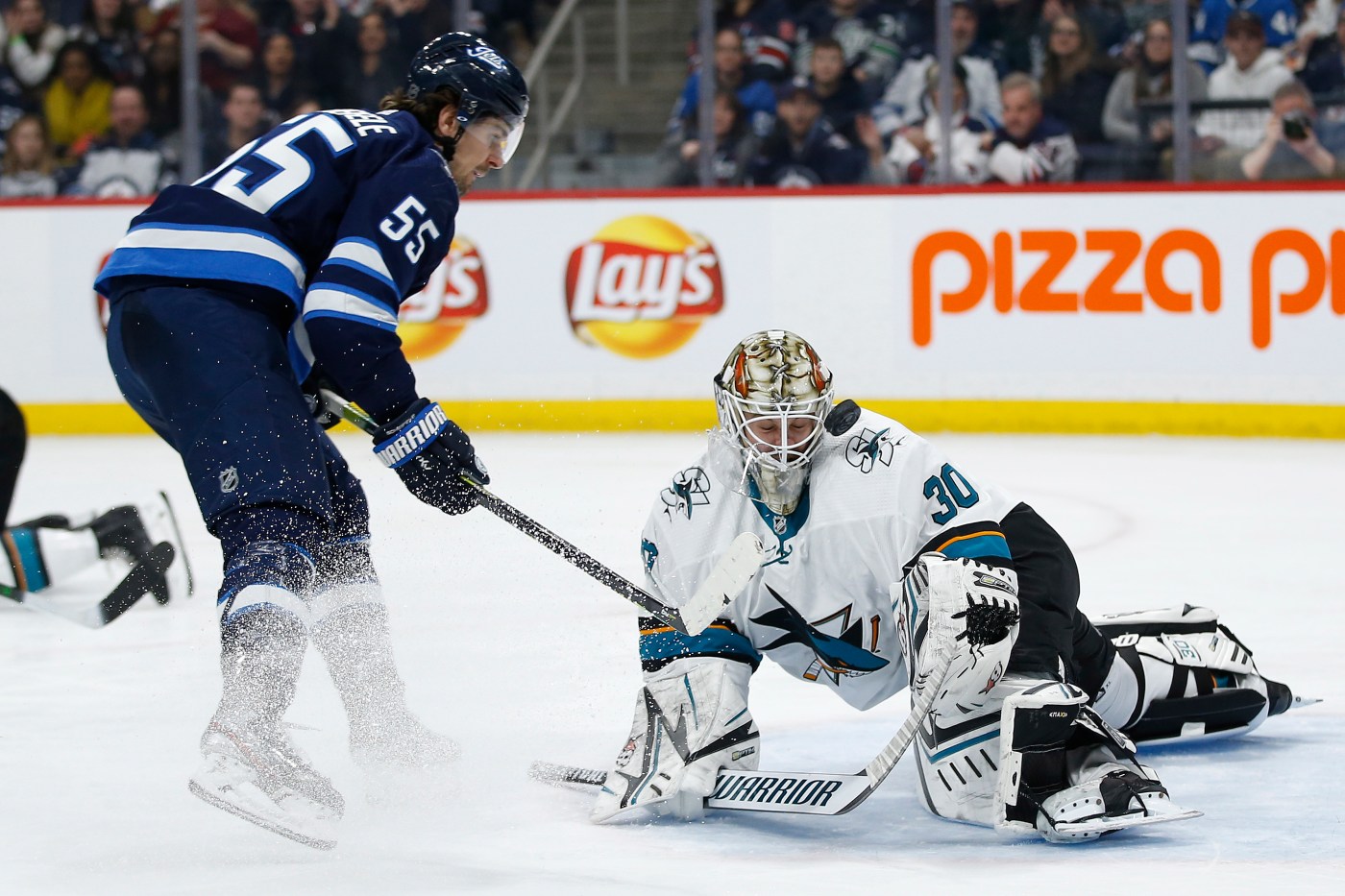 Aaron Dell had just finished making seven saves to help the Sharks kill off a third period elbowing penalty to Evander Kane. But minutes later at another critical juncture of Friday’s game with the Winnipeg Jets, Dell was helpless.

Neal Pionk sent a shot toward the Sharks’ net that glanced off a body in front. Dell was down and out as the puck bounced onto the stick of Kyle Connor, who put it off the goal post with 20 seconds left and a wide open net right in front of him.

“I think the knob of my stick went off of (Connor’s) shaft. That might have helped a little bit,” Dell said. “That’s what I’m going to say, anyway.”

Dell finished with 29 saves, including 17 in a wild third period, to help the Sharks top the Jets 3-2 at Bell MTS Place.

Down 2-1 after two periods, the Sharks (25-28-4) got goals from Melker Karlsson and Timo Meier 89 seconds apart in the third to help win their third straight road game. The Sharks entered Friday with a 1-22-0 record when they’ve trailed after two periods.

Marcus Sorensen also scored for the Sharks, who wrap up their quick two-game road trip Saturday afternoon against the Minnesota Wild.

“We needed a big performance by Dell and he was our best player tonight, by far,” Sharks interim coach Bob Boughner said. “(The Jets) had a lot of opportunities, especially in the first period. Even though they only registered three shots, they missed the net on a few of them and Deller made some saves.”

For the season, Dell is now 8-5-1 with a .914 save percentage in 15 road games. He led the Sharks to victories over playoff contenders Calgary and Edmonton last week, stopping 58 of 62 shots.

“He was great,” Kane said of Dell. “Made a lot of big saves in tight, did a great job scrambling and icing some pucks for us. He’s been playing well for quite a long stretch of time, and we definitely counted on him tonight.”

Other takeaways from Friday.

1. Penalty kill comes through in the end: Of Dell’s 29 saves, 13 came on the penalty kill against a Jets team that entered Friday with four power play goals on its last three games.

Kane was given a questionable interference penalty at the 6:33 mark of the second period, and the Jets took advantage as Connor scored on a between the legs shot from in close at the 8:21 mark to tie the game 1-1.

But Dell and the Sharks went on to kill a high-sticking penalty to Stefan Noesen later in the second period and the call on Kane with 6:43 left in regulation time.

In their 6-2 loss to Calgary on Monday, the Sharks were shorthanded six times and allowed three power play goals.

2. Meier continues resurgence: Meier’s goal at the 6:47 mark of the third period was …read more

Giants HQ: Five things we learned as pitchers and catchers arrive in Scottsdale

Warriors’ Zach Norvell Jr. knows his path to the NBA won’t be easy