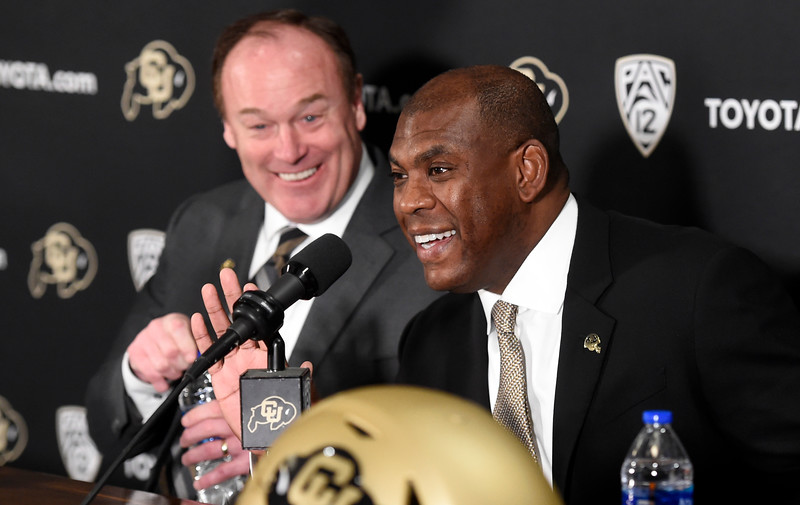 Stunning and not-so-stunning news out of Boulder in the dead of night:

*** Tucker has ties to Michigan State, having worked in East Lansing as a graduate assistant under Nick Saban in the 1990s, and he’s from Cleveland — the Big Ten is in his blood.

Tucker drew interest from the Spartans initially, may or may not have interviewed with them over the weekend — that remains unclear — and then very publicly announced he was staying at CU.

Which, as we wrote, was good PR for the Buffaloes:

To have their head coach attached to a Big Ten job, then recommit to CU, would elevate the profiles of both Tucker and Colorado on the recruiting trails in SEC and Big Ten territory.

It’s an absolute gut punch to Colorado and the Pac-12. And we’ll get to that momentarily.

*** Michigan State’s interest in Tucker — and the tenacious product he put on the field last season — are proof of the quality of the hire.

It was a shrewd move by athletic director Rick George in so many ways.

But Tucker is also an example of the risk that comes when Pac-12 football and men’s basketball programs hire coaches whose roots are in the eastern half of the country.

We have written about this previously, and repeatedly:

Hire a coach whose background traces to the Great Plains or the Upper Midwest or the Deep South, and that coach is likely to develop a wandering eye, especially when the schools in his home region can offer greater resources.

(We’ll get to that issue in a moment.)

We saw the wandering eye when Willie Taggart (Florida native) bolted Eugene for Florida State after one season.

We saw it when Sonny Dykes (Texas) kept looking for jobs in the Big 12 during his tenure at Cal.

We saw it when Cuonzo Martin (Illinois) left Berkeley for Missouri.

And now we see it with Tucker.

Pac-12 programs are much more likely to retain quality head coaches if those coaches are from the western third of the country.

Tucker’s departure is painful for the Pac-12 in a practical sense and devastating symbolically.

A non-blue blood from the Big Ten with greater resources than Colorado swoops in and plucks Tucker away, and there’s nothing the Buffaloes can do to stop it.

We write often about the Pac-12’s revenue and resources here on the Hotline … about the long-haul challenges facing the Pac-12 in its attempts to keep pace with the Big Ten and the SEC … and Tucker’s departure is a glaring, if somewhat unexpected, example of our reasoning.

The Spartans are doubling Tucker’s salary, according to The Athletic’s Bruce Feldman, who broke the story, and they are providing him with a vastly larger salary pool for assistant coaches.

Kurtenbach: What the Warriors mean when they say Andrew Wiggins ‘fits’