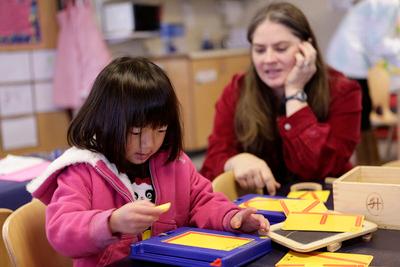 While some school districts on the Peninsula are closing campuses amid declining enrollment, just miles away in Mountain View and Portola Valley, officials have seen a surge of new students and are asking voters to support new taxes aimed at upgrading and expanding aging facilities to retaining teachers.

With more than 7,000 housing units added to the city of Mountain View over the past five years, the Mountain View-Whisman School District has increasing enrollments that have put pressure on its small and outdated facilities.

Aiming to alleviate overcrowding — one of many issues the bond funds would help address — the district is asking voters on March 3 to support Measure T, a bond that would pump $259 million into schools over a decade to refurbish existing classrooms, build new ones, replace aging roofs and equipment and upgrade inefficient heating and ventilation systems.

The $18.6 million a year that the district will generate from the bonds will primarily go to accommodate the influx of hundreds of new students that will be crowding its ten primary and secondary schools and pay for new teachers as the state faces a massive shortage of educators.

The district is among the first in the Bay Area to explore workforce housing to ease teacher turnover due to ever-increasing housing costs, and part of the funds would go into projects that house them.

The district is already moving forward with plans to build 144 units for district staff as part of a larger 716-unit development on West Middlefield Road. While the project is one step to alleviate housing costs for educators, the district still wants to do more for teachers.

“We’ve increased salaries by 28 percent over the past five years, and are still doing so,” said district Superintendent Iyandé Rudolph. “But we realize that increasing salaries and having good benefits is only one part of a larger equation.”

Another challenge for the district is reducing class sizes as more students enroll, Rudolph said. Class sizes for students from Kindergarten to second grade are fairly normal at 24 students per teacher, but some in the community are wondering if it’s possible to reduce the number of students in third and fourth-grade classrooms.

Rudolph said that even if the district wanted to get down to the class sizes seen in lower grades, “we just don’t have the classrooms to do that.”

“We already have one of the lower tax rates compared to other areas,” Rudolph said. “We also have two bonds actually coming off the tax rolls in 2024 and 2025, so taxpayers will see a drop in their tax rate before the new bond takes effect.”

The bond also gives the district flexibility in dealing with a rise in mental health issues that they’ve seen start in the primary and secondary school level but get worse in high school.

Noting the recent suicides at area schools, Rudolph said the funds from the bond also could be used to provide better mental health programs to students.

Still, there are some taxpayers in the district who don’t support …read more

Bloomberg under fire for ‘target minorities’ remarks in 2015