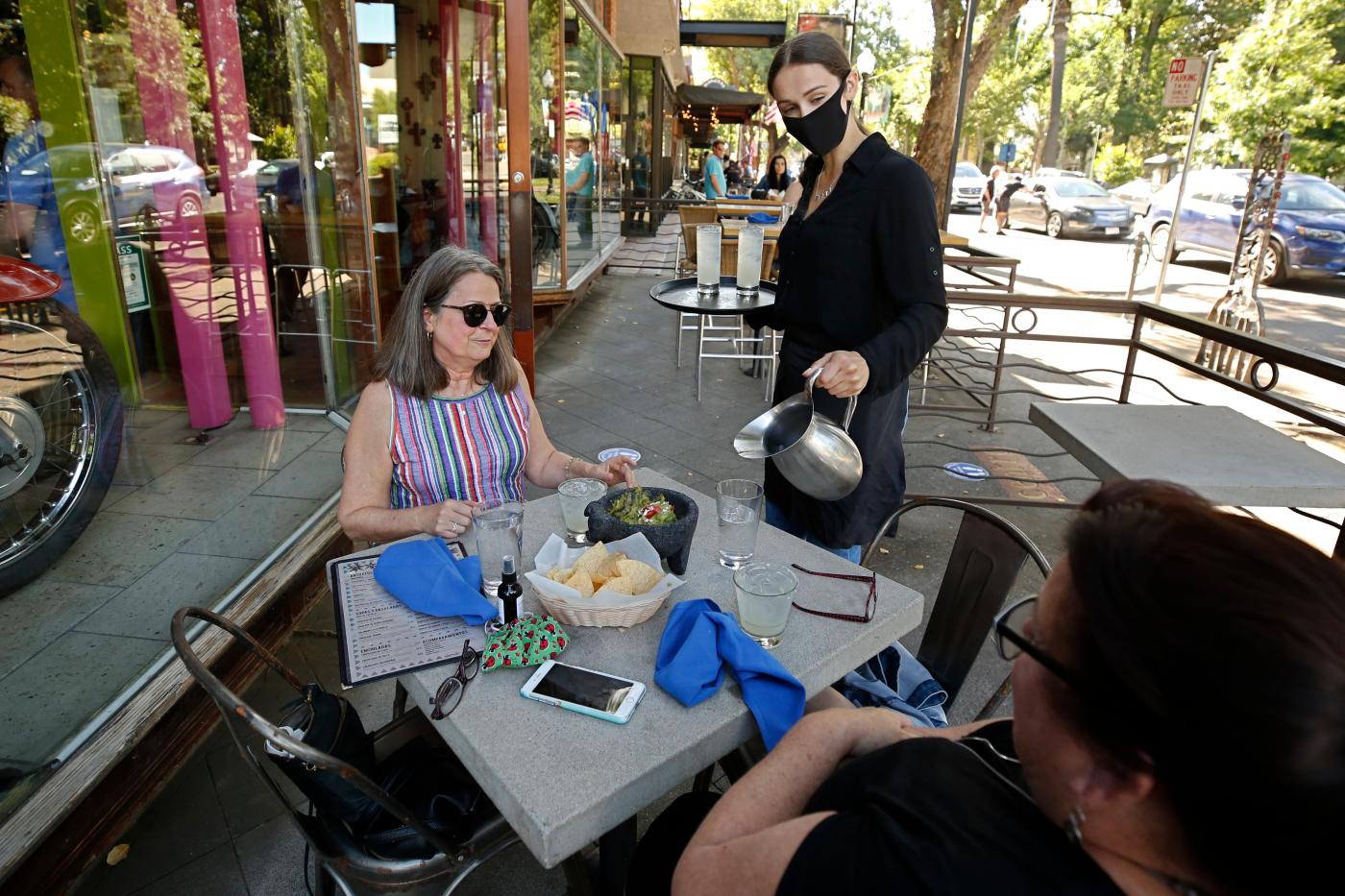 SACRAMENTO — Hundreds of protesters rallied outside the state Capitol on Saturday to protest against California’s stay-at-home orders even as residents entered the Memorial Day weekend with newly expanded options for beachgoing, barbecuing and shopping.

The rally to demand that Gov. Gavin Newsom lift his restrictions on business, religious gatherings and other activities took on the atmosphere of a political rally and festival on a closed-off street.

California Highway Patrol officers closed the Capitol lawn to demonstrators, so speakers addressed the crowd from the back of a flatbed truck as an airplane flew above towing a banner with a picture of Newsom and the words “End his tyranny!” Protesters waved dozens of flags and signs, many in support of President Donald Trump.

Few people wore masks and there was little room for social distancing on the sidewalk or closed-off street.

“The mental and emotional impact cannot even be fathomed,” said Nita Brady, 68, of Modesto, who added that she was angry that two of her granddaughters missed their middle school and high school graduations.

“I think it’s absolutely ludicrous to shut down the schools and especially for the length that they did,” she said.

Stay-at-home restrictions eased across much of the state. Some 45 of 58 counties have received permission to reopen most stores — at least for curbside pickups — and many public spaces by meeting state standards for controlling the coronavirus.

Some saw it as a safety test as the state prepared to celebrate its first major holiday weekend since a statewide order in mid-March clamped down on all but essential trips and businesses.

Social distancing practices have been cited as the main reason rates of deaths and hospitalizations have slowed in many counties, and people were urged to keep their masks on and their guard up while enjoying recently reopened bike paths, hiking trails and beaches.

Many Southern California beaches were open only for swimming, running and other activities. Sunbathing and group activities such as volleyball were prohibited.

Police, lifeguards and other officials were warning people to remember the seriousness of the virus as they enjoy their new freedom.

“Don’t go crazy and stay out all weekend. Don’t get as close as you can to as many people,” Los Angeles Mayor Eric Garcetti said. “Don’t go out without a mask. You see people without masks, avoid them.”

“It’s also something that just saves more lives, including, perhaps, your own,” he said.

For most people, the new coronavirus causes mild or moderate symptoms, such as fever and cough that clear up in two to three weeks. For some, especially older adults and people with existing health problems, it can cause more severe illness, including pneumonia and death.

Los Angeles County, the state’s largest with 10 million people, has been hardest-hit by COVID-19, with more than 44,000 cases and nearly 2,100 deaths. However, hospitalization and increased testing, which allows for quicker identification, treatment and isolation of people who tested positive for COVID-19 and their close contacts, helped slow the spread of infections, health officials said Saturday.

Ask Amy: She’s convinced we’ve been begging her for a three-way for 20 years

Commemorate Memorial Day with a special ‘Parade of Heroes’ online

The Latest: US likely to ban travel from hard-hit Brazil