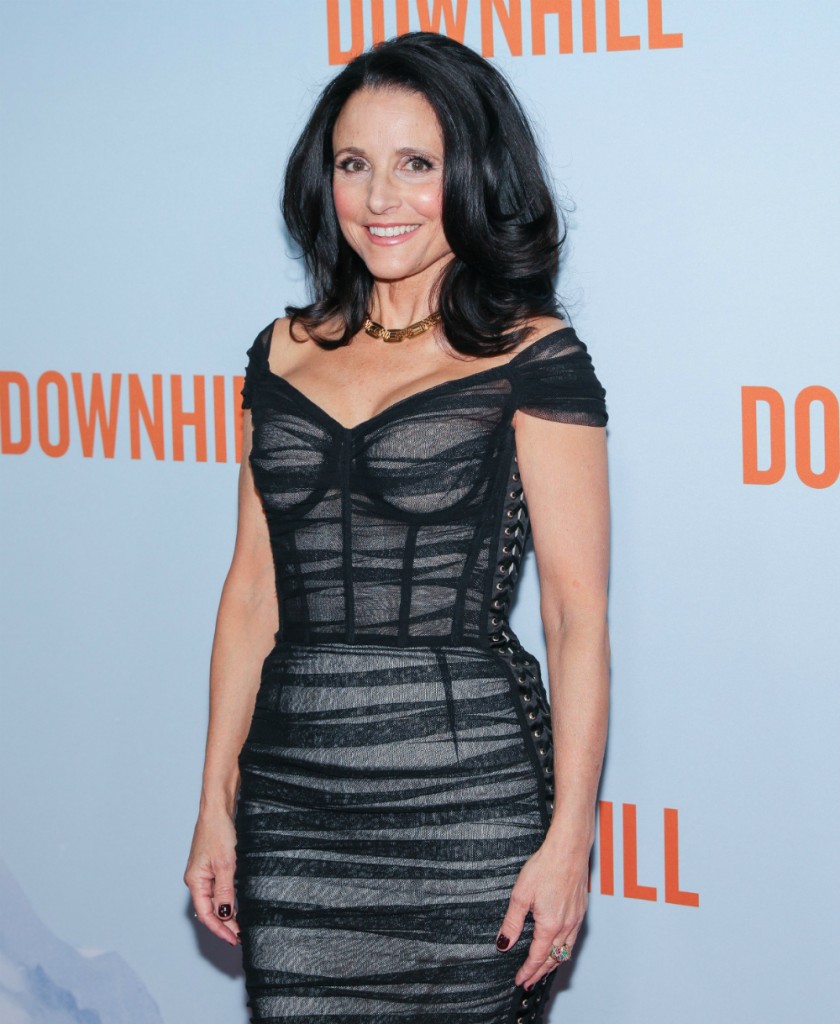 Julia Louis-Dreyfus has a great interview in InStyle. She is promoting her movie with Will Ferrell, the Force Majeure remake, Downhill. I think they are both really funny so I’m worried that I will raise my expectations too high with this film. It’s the first time they’d even met, let alone worked together. The movie story revolves around an avalanche at a ski resort (Julia’s character protects the kids while her husband, Will’s character, run away). Although avalanches have always occurred in nature, climate change is making snowbanks less stable. So, among the many topics covered, InStyle asked Julia about climate change and she said we didn’t have to worry about it because if we didn’t get our sh*t together, we would all be extinct anyway (we could fit the line about getting our sh*t together in the headline).

On having doubts about filming Amy Schumer’s last f*ckable day skit, which addresses ageism in Hollywood: All of a sudden I thought, ‘Wait a minute, why is this funny?’ (But) that’s just the kind of thing I like to skewer.

On forcing herself to speak up: I’ve always been very opinionated, but, honestly, I’m constantly fighting that female kind of mode: ‘Should I say it? I’m sorry!’ But in my head, I’m always like, ‘Do it, do it, do it

On Elaine Benes (her Seinfeld character) being a ground-breaker: I was one of four players, the rest of whom were men, and we were all equally unlikable. And I wasn’t selling romance or sex appeal — it was about something else. That was really important.

On going to Veep table reads during her breast cancer treatment: That was fantastic. Because it kept me hopeful, and I could focus on work instead of…trying to stay alive. You know, making a funny show is a pretty joyful undertaking. As opposed to, say, getting chemotherapy toxins in your veins.

On fighting for health-care post breast cancer: I had felt strongly about the issue before, but now, here it was, stark and real. The notion that someone might have a diagnosis like that and have no insurance, no means to get treatment, was inconceivable to me.

On climate change: The truth is, the planet is going to be fine — because it’s going to eradicate the human population if we don’t get our shit together. There has to be a complete recalibration of how we conduct ourselves and do business.

The whole write-up is delightful. Julia’s voice always comes across so strong in interviews. The sad part is, she’s right about climate change. We cannot sustain life at the rate we are destroying the planet. And yet, I am constantly shocked at the number of people who stick their heads in the sand about that fact. Like, can we build a biosphere for all the climate change deniers? They can destroy their bubble while we set about trying to save our planet.

Much more optimistic is her comments about how attending the table reads for Veep gave her hope. …read more