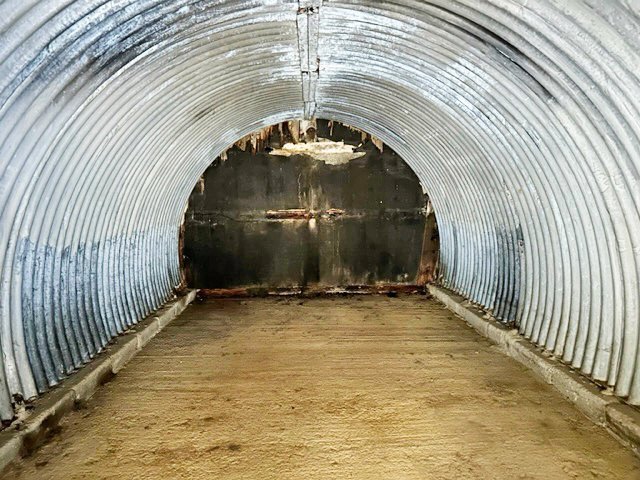 A bunker built on British soil by Nazi soldiers has gone on the market.

The historic site housed 24 Third Reich fighters after they invaded Geurnsey in the Channel Islands.

After sweeping through France, German forces took control of the islands in 1940 once they had been demilitarised and effectively abandoned by the British.

They were the only part of the British Empire to be occupied by the Nazis during the Second World War.

Now a complex of tunnels and bunkers which mark that dark period in the nation’s history are available for purchase.

They were built sometime between 1942 and 1944 and housed guns mounted in concrete pits capable of hitting targets 22 kilometres away.

The Giffoine plot up for sale with Bell & Co estate agents is situated on the south west of the island.

Agents say the site offers a unique chance to see what D-Day might have felt like from the German perspective.

A spokesperson for Bell & Co said: ‘This is an incredible opportunity to offer seven acres of living history dating back to the second World War.

‘The land is on the south west corner of Alderney (3.5 square miles with a population of 2,100) with superb open sea views to the west and south.’

German soldiers and remaining civilians were left to starve after the islands supply lines were cut off after the Normandy Landings.

They were eventually liberated after Nazi officers gave up their positions without a shot being fired after the German surrender.

The historic site is situated on the western side of the island of Guernsey (Picture: Bell & Co/SWNS)

Considerable work is needed to restore the site which its current owner is unable to carry out due to ill health.

Bell & Co’s managing director Andrew Eggleston says he hopes that any future buyer would keep the site open to the public to explore as it has been for years.

He said: ‘It would be a terrible shame if someone were to buy it and then start padlocking it. They’ve done so much work to it, it’s quite amazing.’

The land will be sold by sealed bid, with the deadline set for Friday 9 December.

It is expected that the land will sell for somewhere around £40,000 and Mr Eggleston said that expressions of interest had already been made.

Heather Small reveals she has experienced racism since the age of seven: ‘There isn’t a week goes by when something doesn’t happen’

Dead body found in street may be covered in ‘hazardous substances’

Emmerdale spoilers: Mack is rocked to the core as he discovers Chloe is pregnant with his baby