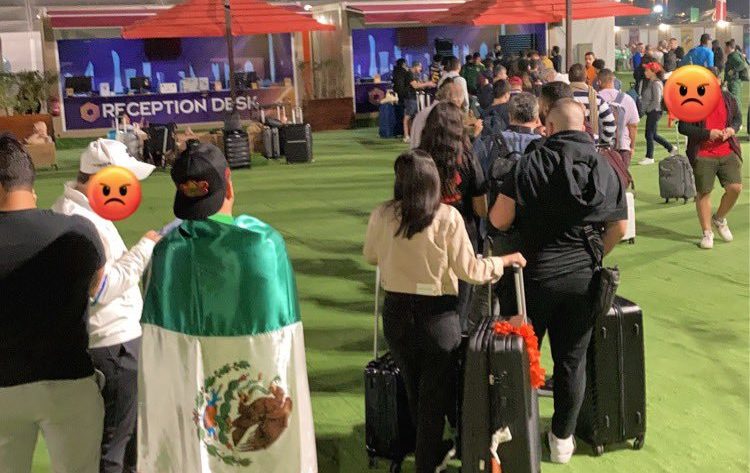 Fans were waiting through the night to check in to their accommodation (Picture: Twitter)

Some Australian football fans in Qatar say they want to leave the World Cup early after claiming their accommodation was ‘flooded with sewage’.

Fans have reportedly been forced to wait in line overnight for their rooms to be ready, only for them to then experience leaking sewage and no hot water.

Qatar World Cup officials have offered full refunds and new accommodation to the fans affected – but some supporters are ready to go home.

Angry Socceroos fans have been posting on social media, with many saying they are now considering selling their tickets.

‘Honestly don’t know what to do. We’re considering selling our tickets and leaving early but I think our chances for a refund on the accommodation are low,’ one wrote.

Another said: ‘Anyone else in the fan villages having a horrible experience? Leakage in the bathroom causing flooding, no hot water, customer service have been overrun with people’s complaints.’

Others have spoken about how their apartment was flooded with sewage, forcing them to look elsewhere for accommodation.

They said: ‘We are in Baraw village and our apartment has been flooded with sewage two days in a row. That said, they recon they have now fixed it and there are a team of cleaners here but they also said that yesterday.

‘We gave up and found accommodation elsewhere. If you need a number for a guy I can give it to you. He is a property manager and rents furnished apartments out by the month but just stay how long you need. It’s the same price.’

In a statement to The Sun Online, the Qatari Supreme Committee officially blamed the delays in checking in and the poor conditions on ‘owner and operator negligence’.

They also conceded some units ‘have not met the required standards that were advertised to fans’, pledging that ‘rectifying these issues remains the utmost priority’.

The statement adds: ‘Full refunds are being offered to fans severely impacted by this issue as well as alternative accommodation which will be free of charge for the duration of their stay.’

Who are …read more

N-Dubz apologise after cancelling gig minutes before show was due to start leaving fans fuming: ‘We didn’t want to sell you short’

How to feel calmer after a stressful dream