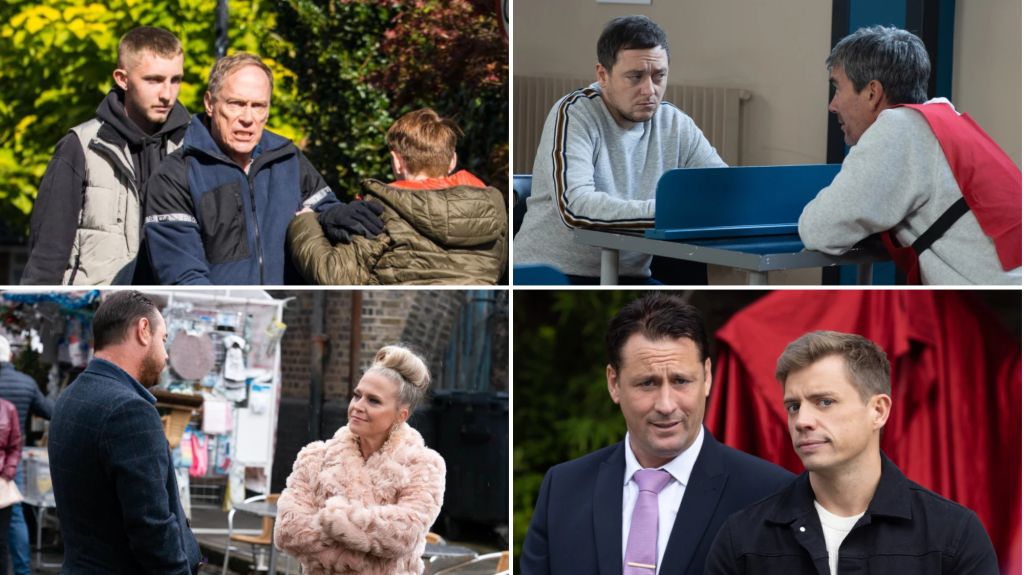 Another explosive week in the nation’s biggest soaps, with shock outbursts and huge cover-ups on the cards (Picture: ITV / BBC / Lime Pictures)

There are accusations and revelations aplenty in the soaps next week, as some jump to conclusions while others make a surprising discovery.

Stephen Reid – aka Coronation Street’s new killer – is involved in something of a fight when he’s ambushed by teens while out on the job, while Emmerdale sees Matty Barton on a mission to find out what it is that led to Moira and Amy Wyatt’s departures.

Will he find out the truth? Or is Cain keeping quiet?

EastEnders, meanwhile, sees Mick and Linda Carter growing closer to one another, much to Janine Butcher’s horror, while Sonia Fowler discovers that Dot Branning has died.

Over in Hollyoaks, there is heartbreak for Juliet, who’s health takes a serious turn as a big storyline kicks off for her after Misbah Maalik runs some tests.

It’s going to be a memorable week, and here’s a full round-up of all the biggest moments to come.

1. Stephen calls Six Fellas, the fast food company that he worked for previously, and begs for his job back. The boss begrudgingly gives him another shot, but Stephen is later accosted by teenagers who steal his delivery box, work phone and they also demand his money. Stephen subsequently spots Elaine approaching and thus he attempts to race away on his moped – but in his haste, he loses control and goes sprawling across the road!

2. Martha suggests to Ken they look at tweaking a line in the script, and as they discuss it over a cup of tea, Ken receives a text from Wendy – and explains to that he has a prior engagement.

3. Esther suggests Summer should move in – and Summer is keen to do so. Jacob, meanwhile, reveals that Aaron’s dad has been drinking, but Summer’s attention is soon elsewhere as she’s bleeding. Later, she discovers she’s suffered a miscarriage.

4. Todd urges Sean not to give up on Laurence. Sean leaves a message on Laurence’s phone. A drunk Laurence then calls at the Rovers and tells Todd about Sean’s voice message, before admitting that he really likes Sean.

5. Maria meets with Munir and Daryan to discuss the refugee centre but they’re horrified when Griff and his entourage approach. Griff confronts Maria, showing her the online petition that Max has set up – and Maria is shocked to see that it has so many signatures.

6. Tim is furious that Sally has given away his favourite jacket to the clothes swap. When he later spots Steve wearing the item of clothing, he reveals to Tracy that Steve broke his foot at a foam party surrounded by gorgeous girls.

Heather Small reveals she has experienced racism since the age of seven: ‘There isn’t a week goes by when something doesn’t happen’

Patrick Kane still ‘happy to be playing hockey,’ even as Blackhawks struggle

When is Black Friday 2022 and when is Cyber Monday?