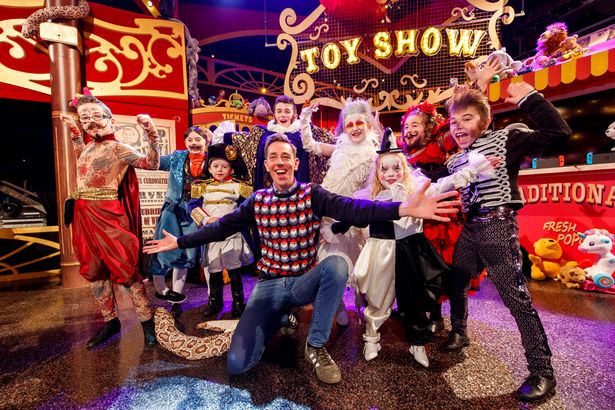 Here’s everything you need to know about the Late Late Toy Show 2023 (Picture: RTE)

The big day is almost upon us, as Ireland – and the rest of the world – settles in to watch the Late Late Toy Show 2022 in all its glory.

Another year has come and gone, and this Friday will see Late Late Show presenter Ryan Tubridy swap the suit for Christmas jumpers, and esteemed guests for dozens of hyper children.

It’s going to be great.

The Toy Show 2021 was just about as chaotic as everybody hoped, featuring Ed Sheeran getting heckled by a child in his backing choir and being an incredibly good sport about it.

Watching Ryan and other celebrity guests get mocked by power-tripping children is an Irish tradition as big as putting up the tree or having turkey on Christmas day, and for those of us abroad in the UK and beyond, we don’t have to miss out.

So, what time is the Late Late Toy Show on and how can I watch from the UK and abroad?

The Late Late Toy Show 2022 will air, as tradition, on the last Friday in November: in this case, November 25.

Things will kick off at 9.35pm on RTÉ One, and will follow the usual Late Late Show timing, running for over two hours before finishing up at 11.55pm.

How can I watch The Late Late Toy Show from the UK and abroad?

People tune in to the Late Late Toy Show from across the world each year (Picture: RTE)

For the last few years, RTÉ One has allowed viewers outside of Ireland to keep up with the festivities at home by making The Late Late Toy Show free to watch from abroad.

If you’re in the UK – or anywhere else in the world for that matter – you can watch The Late Late Toy Show live, for free, on RTÉ Player.

Just visit the website at 9.35pm and watch the live TV channel and it’s as simple as that!

MORE : The Hot List: The best Christmas events that you …read more

Yes, you can talk turkey — and baseball — on Thanksgiving