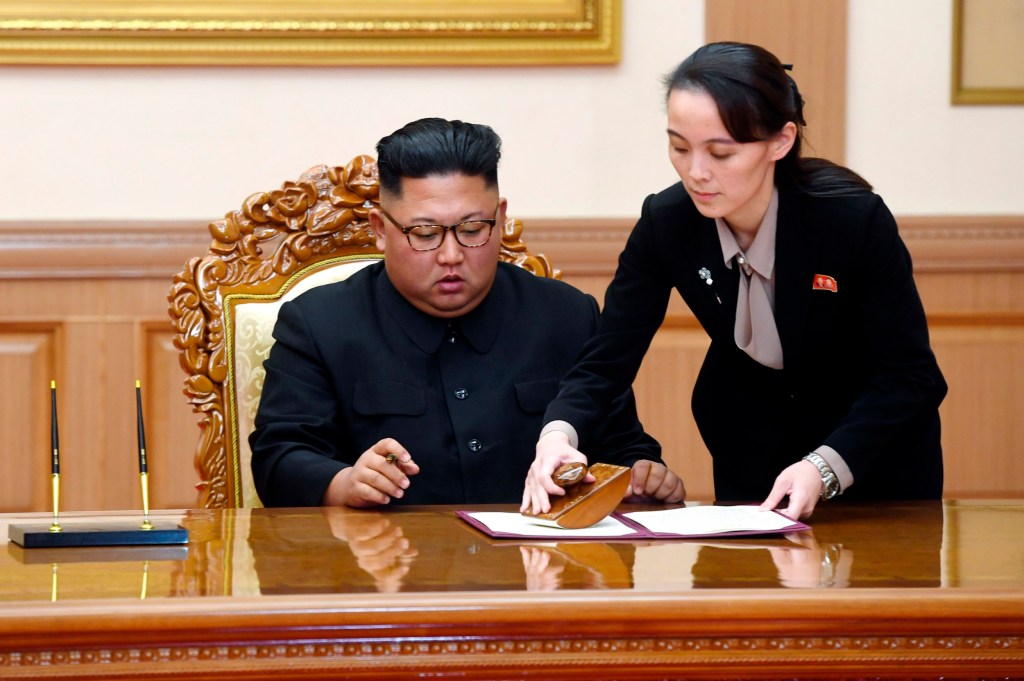 Kim Yo-jong was scathing about the South Korean regime and the US (Picture: AP)

Kim Jong-un’s sister called the South Korean government ‘idiots who are ‘stray dogs gnawing at a bone given by the US’.

Kim Yo-jong was ranting about sanctions made against her country when she made time to hurl the insults.

She said: ‘We warn the impudent and stupid once again that the desperate sanctions and pressure of the US and its South Korean stooges against North Korea will add fuel to the latter’s hostility and anger and they will serve as a noose for them.

‘As soon as the US talked about its “independent sanctions” against the Democratic People’s Republic of Korea (DPRK) South Korea parroted what the former said.

‘This disgusting act shows more clearly that the South Korean group is a “faithful dog” and stooge of the US.

‘If they think that they can escape from the present dangerous situation through sanctions, they must really be idiots as they do not know how to live in peace and comfort.’

The scathing words were published in a statement to the Korean Central News Agency.

North Korea has been under multiple rounds of United Nations sanctions over its previous nuclear and missile tests.

But no fresh sanctions have been applied this year, even though the country has conducted dozens of ballistic missile launches, which are banned by UN Security Council resolutions.

It’s possible this is because China and Russia, two of the UN council’s veto-wielding members, oppose new sanctions.

Washington is locked in a strategic competition with Beijing and in a confrontation with Moscow over its invasion of Ukraine.

Pedestrians walk past a street television showing news of North Korea firing a ballistic missile on a street in Tokyo, Japan (Picture: EPA)

The missile was fired from near the capital and flew across the country, landing just 130 miles west of Hokkaido inside Japan’s exclusive economic zone.

Japanese Defence Minister Yasukazu Hamada told reporters depending on the weight of the warhead, it had a range of over 9,320 miles, ‘in which case it could cover the entire mainland United States’.

The US quickly slammed the launch and vowed to take ‘all necessary measures’ to guarantee the safety of its mainland and allies South Korea and Japan.

Who is Kim Yo-jong?

Kim Yo-jong is a politician in her native North Korea.

Her exact date of birth is not known. The U.S. Treasury say her birthday is 26 September 1989, however, South Korean sources believe she was born on the same day in 1987.

She’s often photographed next to her brother, and analysts have previously predicted she could take over if he was suddenly unable to rule.

The pair are said to have a close relationship as a result of spending 1996 to 2000 studying in isolation together in Switzerland.