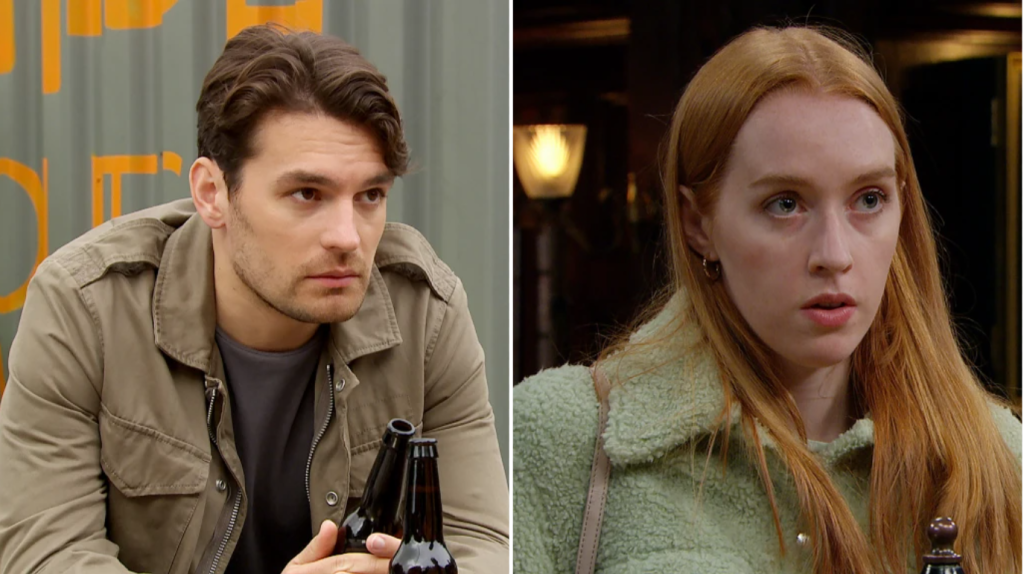 Mack’s secrets could be about to unravel (Pictures: ITV)

Following Kerry (Laura Norton)’s recent departure from Emmerdale, Chloe (Jessie Elland) is left feeling isolated as she deals with the fact that she’s pregnant and on her own.

There is a supportive person around though – Charity (Emma Atkins). Who also happens to be the partner of the baby’s father, Mackenzie (Lawrence Robb). Clearly it’s an awkward situation and Chloe struggles with Charity’s kindness.

And Mackenzie struggles a bit, too, when Charity tells him that Chloe is pregnant.

He obviously wonders if this could be anything to do with the one night stand he and Chloe had after he had an argument with Charity, so he heads over to Keepers to find out.

Chloe confirms that the baby is his, and that she plans to keep it. Mackenzie is left terrified that his secret will come out, particularly when he finds out that Kerry also knows about it.

Emmerdale’s Matty has Kyle arrested for murder as he unearths the truth from Cain?

Knowing that it’ll be better for him if Charity hears about the baby from him rather than anyone else, he braces himself to tell her, wondering whether their relationship will survive this latest blow.

How will Charity react?

Eton students ‘were racist and misogynistic’ towards state school girls

Worldwide plastic pollution ends up on on remote British island

Why could Babatunde Aleshe be exempt from some I’m A Celebrity bushtucker trials?

When is the next Royal Mail strike? November and December 2022 dates