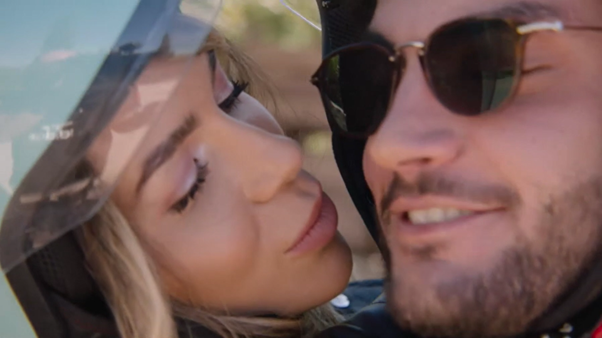 Davide Sanclimenti and Ekin-Su Cülcüloğlu are taking viewers on the next stage of their journey, as they travel to each other’s homelands of Italy and Turkey in new series Homecomings.

The Italian Stallion and Turkish delight won this year’s Love Island, beating Gemma Owen and Luca Bish in the final.

And they’ve since gone from strength to strength, having moved in together and now landed their new TV show.

In a clip shared exclusively to Metro.co.uk, the couple pack on the romance – and we’d expect nothing less.

During the snippet preview, Ekin-Su is surprised by a vespa trip, although Davide he hasn’t driven once since he was 15.

‘It’s something symbolic from Italy,’ he explains, before adding: ‘It’s going to be fine, I’m going to practice with Ekin-Su.’

She of course showers him in kisses at the surprise, before they both manage to travel smoothly through the streets of Verona (although she’s heard squealing and asking if he’ll let her off).

As they park (and the vespa nearly falls on her), she says to him: ‘You’re a good driver, you gave me one heck of a ride Davide.’

We can only imagine what other surprises the pair have in store for each other.

Elsewhere, Ekin-Su and Davide told us about any other surprises coming in the future, with Davide teasing that when it’s time to propose he will ‘organise something very big.’

Ekin-Su added: ‘I think with Davide he is such a romantic like when he has these things where he’s so unexpected like, just he’s really thoughtful and really sweet.’

She admitted she ‘never’ has her hopes up as he added: ‘If you expect something I will never do it.’

‘We had two little arguments,’ Davide told us at the TV Choice Awards.

‘We’ve not had a proper argument yet, we’re actually so much closer,’ she added, as he echoed: ‘We’re the copy and paste one of each other.’

Studio for artists with disabilities expands into ceramics after $300,000 donation