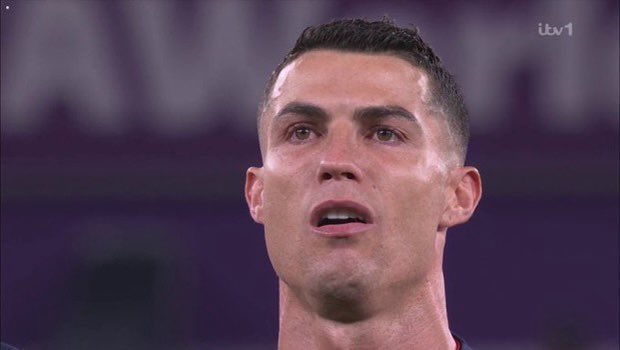 Portugal captain Cristiano Ronaldo broke down in tears during his country’s national anthem as he kicked off what is likely to be his final tournament on the international stage.

The 37-year-old had competed in four World Cups before today’s clash against Ghana, having made his debut in the competition in 2006.

The forward’s second stint at Manchester United came to an end earlier this week after Ronaldo opted to give a controversial interview to Piers Morgan.

All eyes were therefore on the unattached Ronaldo today as he took to the field for the first time since his acrimonious departure from Old Trafford.

Though the veteran still believes he can compete at the top, it’s likely that this will be his final international tournament as he would be 39 by the time the European Championships arrive in 2024.

And, that was perhaps playing on Ronaldo’s mind as he made his fifth and potential last appearance at the World Cup today.

The forward was visibly upset at his country’s anthem played and he could be seen crying towards the end of the anthem.

Ronaldo is competing at his final international tournament (Picture: ITV)

MORE : Chelsea goalkeeper Edouard Mendy will remain Senegal no1 against Qatar despite errors against Netherlands