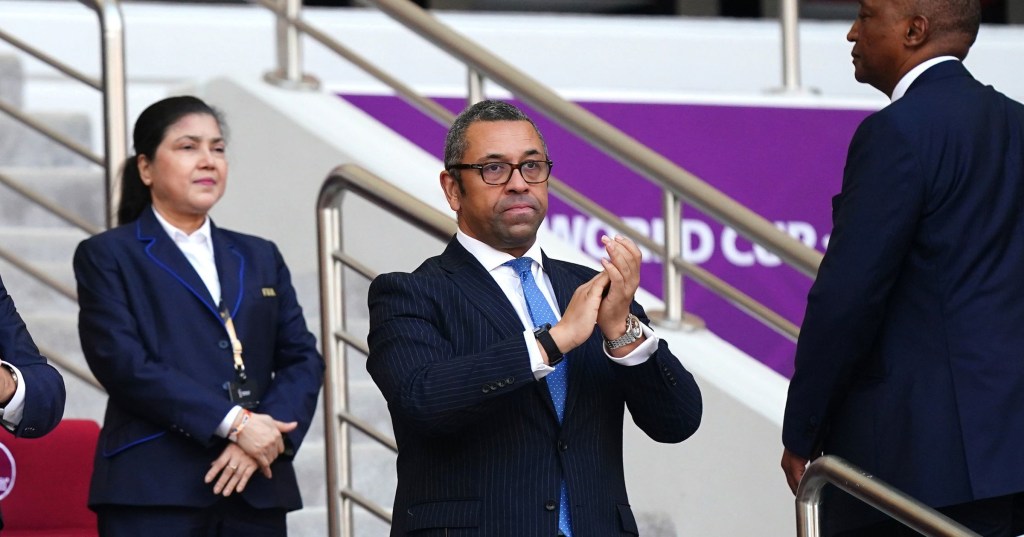 James Cleverly is convinced Qatar is working on the issue of gay rights after he ‘brought [it] up over a number of years’ with the country (Picture: PA)

The UK’s foreign secretary claimed the host of the World Cup is helping LGBTQ+ people feel safe – despite many fans saying they’ve had their rainbow accessories confiscated.

From England claiming it was forced to backtrack on wearing its anti-discrimination OneLove armband to Wales fans saying they were made to take off multicoloured hats, queer rights are at the forefront of discussion around the tournament so far.

But James Cleverly is convinced Qatar is working on the issue of gay rights after he ‘brought [it] up over a number of years’ with the country.

‘I’ve made it clear that we feel very strongly about this issue and, actually, one of the advantages about having a strong relationship with other countries is you can have these difficult conversations,’ he told the BBC.

‘The Qataris know how seriously we take this issue and they have taken real steps to ensure that gay football fans are safe and do feel secure and can enjoy the football.’

But senior Conservative MP Alicia Kearns, who chairs the Commons Foreign Affairs Committee, disagrees and said ‘nothing about their behaviour has changed’ since Qatar won hosting rights in 2010.

‘We should always be hopeful, but I do not meaningfully believe that holding the World Cup in Qatar is going to change anything on the ground,’ she said.

‘Qatar has shown since it received the nomination to hold [the World Cup] that nothing about their behaviour has changed domestically or even regards to workers.

‘So I really don’t think, unfortunately – and I wish this was not the case – that we can have any hope that things will meaningfully change.’

England and Wales were among seven European national teams who dropped plans to wear the OneLove armband following the threat of sanctions from Fifa.

‘I urge the team captains at their post-match press conferences to spend just 30 seconds to speak out for the rights of women, LGBTs and migrant workers.

‘That would have a huge impact, reaching a global audience of hundreds of millions of people.

‘Fifa has crushed the OneLove campaign with the threat of yellow cards. It’s time to show Fifa and Qatar the red card.’

‘The Lion King’ review: In must-see musical, the commitment to great artistry is everywhere