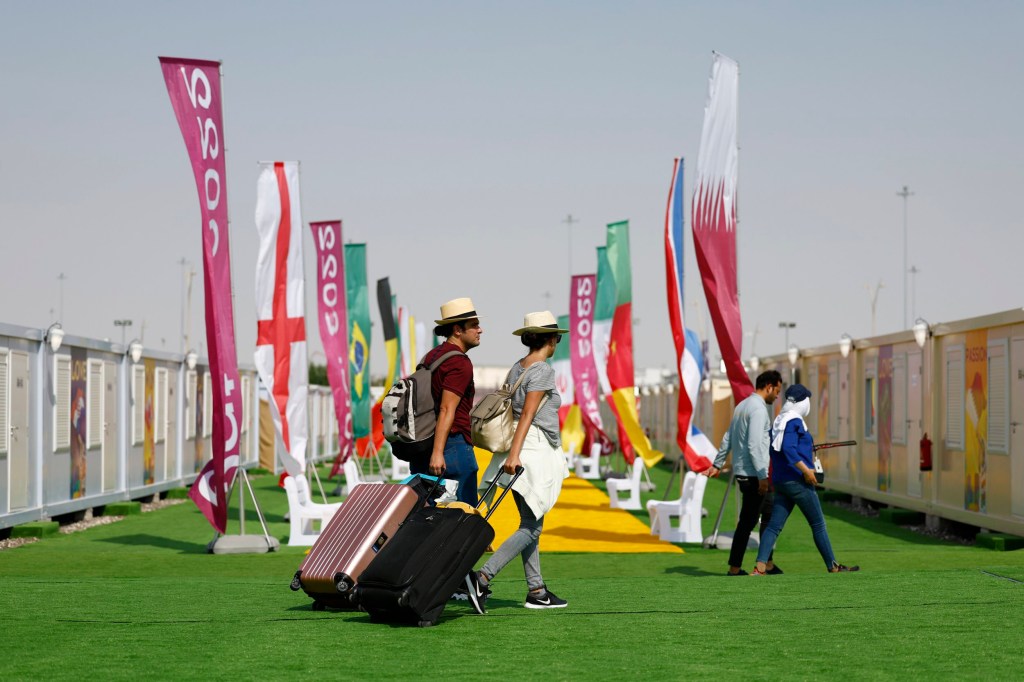 Just a few days into the World Cup and England fans aren’t happy with what is on offer (Picture: Getty)

England fans have slammed the World Cup fan village and shared photos of their ‘bleak’ £200 a night breakfast.

Some supporters have even said it feels like the tournament is yet to begin.

Three Lions fans who have forked out thousands of pounds to travel to Qatar for the tournament have told of their frustration and how they feel let down by the organisation.

Dubbed ‘Qatar’s global street carnival’ the Corniche in Doha is a waterfront promenade that goes for 7km along Doha Bay.

It is where national holidays and annual celebrations are held in Qatar.

But pictures from World Cup fan zones and a village where supporters are staying have shown a different side to the high-profile tourist hotspot.

Footage taken after Saudi Arabia’s shock win over Argentina yesterday morning shows the deserted fan zones, a far stretch from what fans might have hoped for.

Some fans have complained about how far toilets are away from each other (Picture: Reuters)
Bleak photos show the breakfast options at the £200 a night fan village (Picture: Jam Press)
The fan zones where supporters can watch matches were empty yesterday (Picture: Reuters)
The conditions of the areas close to stadiums near to Qatar has been blasted by Three Lions fans (Picture: EPA)

MORE : Brazil opt for ‘unprecedented’ line-up for World Cup opener vs Serbia as Fred misses out

MORE : World Cup 2022: Moments of humanity are still what matter

Some supporters have said toilets are located a kilometre apart from each other and many still haven’t been built, with only one screen to watch the games nearby.

Breakfast at their £200-a-night accommodation has also been heavily criticised, with guests blasting organisers.

John, who didn’t want to give his surname, has travelled to Qatar from London to watch the biggest football tournament in the world – but he feels let down by the organisation.

In a video taken from the supposedly bustling fanzone, he says: ‘This is the Corniche, it’s completely dead, there’s a game going on – Argentina versus Saudi Arabia.

‘They’ve piled in a load of these food vans, no one’s buying anything, they’ve got like two or three people per unit.

‘There’s no one around. There’s a screen over here so there’s a little gathering of people.

‘There’s only toilets once every kilometre here and we’ve come here on Tuesday, the third day of the World Cup, and we’ve asked to use the toilet and they won’t let us.

The camera then pans around showing another closed toilet and an attendant who John said ‘wasn’t very helpful’.

The fan zones have been slammed by supporters (Picture: Getty)