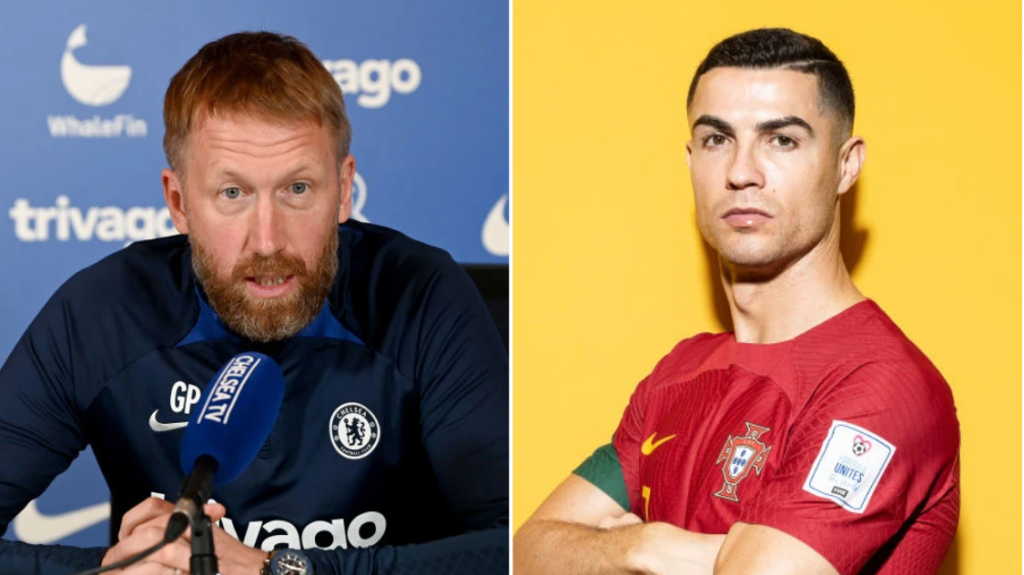 The Blues held talks with the Portuguese star over the summer (Pictures: Getty)

Chelsea are not currently exploring the possibility of bringing Cristiano Ronaldo to Stamford Bridge in January even though the forward is now available on a free transfer.

On Tuesday evening, Manchester United released a statement confirming that the 37-year-old’s contract had been terminated with immediate effect by mutual agreement.

United were furious with an interview Ronaldo gave last week in which he criticised the club’s hierarchy, accused them of ‘betrayal’ and said he would ‘never respect’ manager Erik ten Hag.

After taking legal advice, United felt the interview – coupled with the five-time Ballon d’Or winner’s refusal to come on as a substitute against Tottenham last month – meant he was in breach of his contract.

Ronaldo’s £500,000-a-week deal still had seven months to run but he will not return to Manchester following the World Cup, while United are believed to have avoided an expensive pay-off in the region of £16million.

The former Real Madrid and Juventus star is now in need of a new club, though received precious few offers in the summer when he first tried to engineer a move away from Old Trafford.

One club who did consider an approach for Ronaldo was Chelsea, with the west London side’s new owners – led by interim sporting director Todd Boehly – holding talks with the forward’s agent, Jorge Mendes.

But then-boss Thomas Tuchel torpedoed a deal and vetoed a move for the veteran attacker, with some reports suggesting he had been warned off a move by United’s former interim boss Ralf Rangnick.

Now Chelsea are once again one of the names being linked with a swoop for free agent Ronaldo, who is keen to join a club who are still competing in the Champions League if possible.

Current boss Graham Potter has less influence on transfers than predecessor Tuchel, but The Telegraph’s Matt Law claims Chelsea have ‘no plans’ to reignite a move for the Portugal international.

Obviously that situation could change in the five-and-a-half weeks before the January window opens, particularly if Chelsea were to be hit by an injury to one of their attackers.

Not long after news of Ronaldo’s United exit broke, reports in Spanish newspaper Marca claimed the forward’s two main options are now Newcastle and Saudi Arabian club Al-Nassr, who made an approach in the summer which would have made Ronaldo the highest-paid footballer in history.