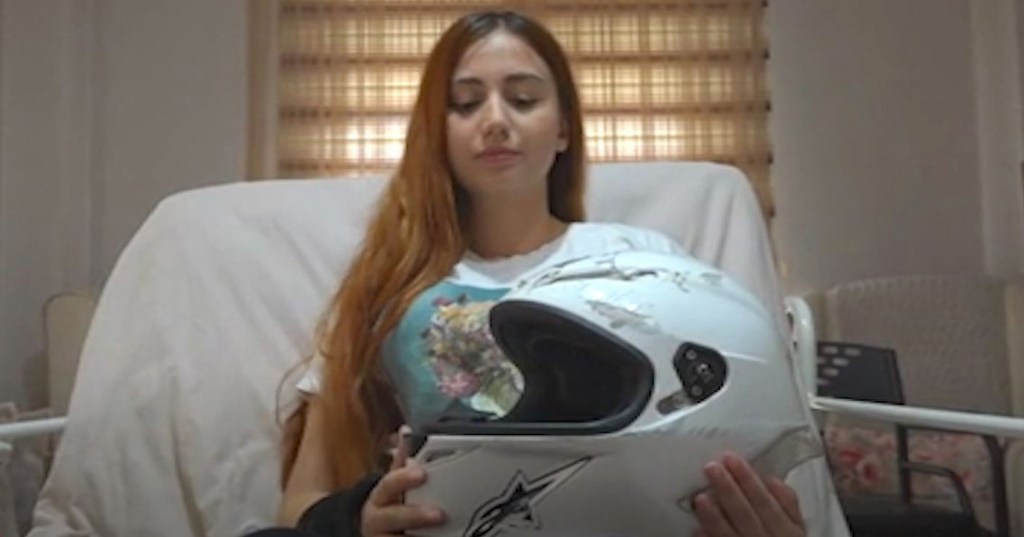 Nan gave her granddaughter a crash helmet and it saved her life days later (Picture: Newsflash)

A nan who gifted her granddaughter a motorcycle helmet after dreaming of her in a horrific crash ended up saving her life just days later.

Biker Asli Ece Ersoy, 22, was seriously injured in a real-life accident when a minibus crashed into her on a roundabout in Eskisehir, north-western Turkey, on October 1.

Asli – a car saleswoman and Anadolu University business graduate – was put into intensive care for 20 days following the crash, and said she’s still in a lot of pain.

But despite her ordeal, Asli says she owes her life to her grandma, who gave her some money to buy a new helmet after having a dream her granddaughter would soon be involved in a crash.

Had she not been wearing the helmet, Asli believes she would have been killed.

‘My helmet saved my life,’ she told local media. ‘My grandmother bought it for me. I didn’t have a good helmet when I first started riding a motorcycle.

‘My grandmother saw me in an accident in her dreams. She then saved up and gave me money to buy a new helmet, which ended up saving me.’

Recounting the incident, Asli said she set off for work on her motorbike from her home in Eskisehir, as she did every day.

Asli Ece Ersoy, 22, was gifted the helmet by her nan after she had a dream of her being involved in an accident (Picture: Newsflash)

But as she made her way down the left lane of the main boulevard, she was suddenly smashed into by a minibus driver who was attempting to turn left at a roundabout from the middle lane.

Video footage of the smash shows Asli being sideswiped by the minibus with such force it ended up ripping one of the wheels right off her bike.

Later footage showed deep scars had been left in her helmet caused by the high-speed impact, which almost proved fatal.

‘I heard a voice, then when I opened my eyes, someone was looking at me,’ she said.

‘When I closed my eyes again, there were voices from the ambulance. The next time I opened my eyes was in the hospital.’

‘The most I can remember from that day is the nurse shouting, “Asli, come to your senses, breathe,” to me, before everything went dark.

Although she has since been discharged from the hospital and is on the road to recovery, Asli says she blames the bus driver for the collision and is still in a lot of pain.

‘I am currently going through a very painful process and I can’t walk right now,’ she said.

‘I’m going through physical therapy. As the bones fuse, I will be able to walk again.

‘I cannot use my left hand, and I am experiencing a lot of pain due to fractures in my spine.

British boy, 14, shot dead while on holiday with mum in Pakistan