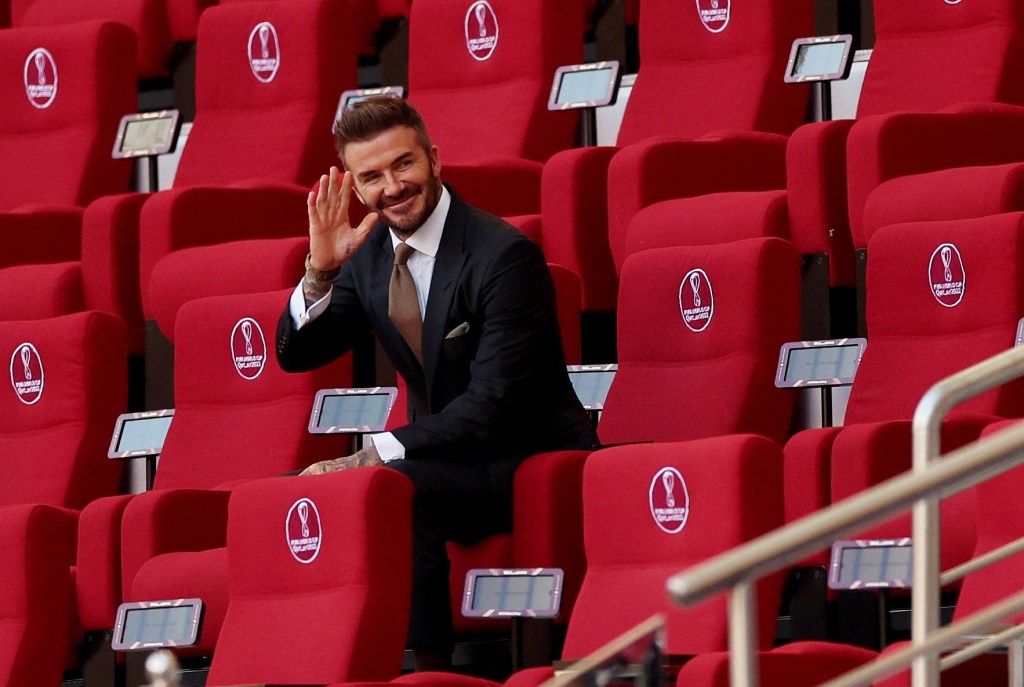 David Beckham gave a cheeky wave as he took up his seat in the stands (Picture: Reuters)

David Beckham was in cheerful spirits as he grabbed a seat before the anticipated England vs Iran game at the Qatar World Cup.

The retired footballer, himself former captain of the England team, donned a smart suit and sat in the stands at the Khalifa International Stadium in Doha on Monday.

On-hand for moral support, David, 48, was in great spirits and waved to fellow spectators as he took up a plush VIP seat.

With empty seats around him, David appeared to be the first to arrive in the section but he was soon joined by his best friend and sports agent Dave Gardner. He was also pictured chatting to Qatari officials and warmly greeting fans.

It’s the second World Cup game David has watched in person after attending the opening ceremony and Qatar vs Ecuador game on Sunday.

David has signed on as an official ambassador for Qatar during the World Cup but his support has been controversial, with critics highlighting the human rights scandal involving the country.

In particular, the sports star has fallen under scrutiny in light of laws against the LGBTQ+ community in Qatar where it is illegal to be gay.

Comedian Joe Lycett urged David to walk away from his ambassadorship with Qatar, reportedly worth £10million, but he refused to buckle to the deadline.

As a forfeit, Joe appeared to go through with his promise to shred £10,000 in cash unless David stepped down.

However, the comic has since confirmed that it was a stunt and he instead shredded David’s Attitude magazine cover from 2002.

In August, David appeared in an advert for Qatar Tourism and was seen exploring the country, while saying: ‘It’s another beautiful day here in Qatar.

‘This will go down as one of …read more